Sheffield’s smaller industries turned their hand to war work. The city is well know for its cutlery but it made many other things small steel items and components. The factories expanded and changed production to meet military needs; involving over 100,000 workers by the end of the war. The Speaker  will also give an insight into the precise nature of shell production, as a case study of workmanship, and the role that Sheffield women played in keeping the front line troops supplied.
The title  ‘Tea Pots to Tin Lids’, which relates to a factory that got the speaker  interested. Dixon’s switched from making high class tableware for hotels and cruise ships to making the Brodie steel helmet, which was introduced in 1915 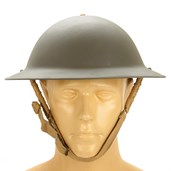