ONLINE: 'Arthur and Adeline - a true story of WW1 bravery and romance' by Dennis Claridge

This online talk: goes live at 19:30 for a 19:45 start, ending at about 20:45. Participating is quick and easy. The only equipment you need is a computer, or a tablet, or a smart phone. Simply email wfa.nwkent@gmail.com for your link. We'll also automatically add you to the mailing list to keep you updated with future events.

About the talk: Arthur Cima was born the son of a Swiss confectioner, and joined the Merchant Navy as a steward. Finding himself in Australia early in WW1, he signed up, joining the 13th Australian Infantry Battalion. Promoted to corporal, he fought valiantly as part of the Anzacs at Messines Ridge and Passchendaele and won the Military Medal. He was blinded in action on 4 July 1918 when his face was destroyed by an explosive bullet. Throughout his life Arthur seems to have accepted his fate with great dignity and forbearance. He was to fall deeply in love with one of his nurses, Adeline Guidotti, who was married with two children. She showed great devotion for Arthur, and she left her family so she could care for him. Eventually they were able to marry. When Arthur died, he left the contents of his bungalow to a neighbour, the speaker/author, Dennis Claridge. Inside, Dennis found a chest full of documents, with over 300 postcards and many photos. Using this material, he has written this fascinating account of Arthur’s life.

About the speaker: Dr Dennis Claridge retired from the Research Dept., at ICI's Heavy Organic Chemical Division. He and his wife befriended an elderly and visually impaired neighbour, the eponymous Arthur. When Arthur died, he left Dennis a treasure trove of documents. With these as his source, Dennis has written and published Arthur and Adeline, an extraordinary true story of bravery and devotion. All profits from the sale of this book will be donated to Blind Veterans UK, formerly St Dunstan's, the war-blinded charity. 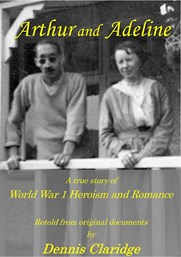