All photographs by Carole Evans

A memorial to the lost men of Chapel Street, Altrincham by artist Carole Evans.

The Bravest Little Street in England features two new bodies of work which memorialise the brave men from Chapel Street, who  failed to return home after the First World War 100 years ago.

Chapel Street, situated in the North West town of Altrincham, received the accolade of 'the bravest little street in England' after the town was awarded a Roll of Honour by King George V in 1919. Out of the 161 men who enlisted from the street, 29 failed to return home, and a further 20 died of their wounds. Chapel Street was later razed to the ground in an attempt to clean up the town in the 1950s. The story of the brave men of Chapel Street was largely forgotten until 2007, when a blue plaque was unveiled on the wall of Phantong Thai, formerly the Grapes Inn, and the last remaining building of Chapel Street. 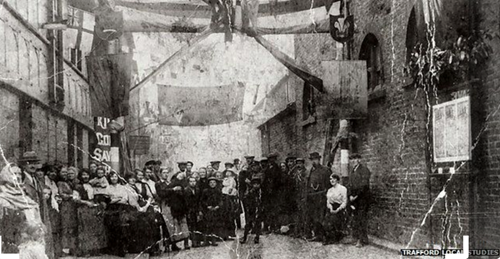 This exhibition attempts to evoke a memory, and a personal connection, with the brave men who lost their lives. It includes two bodies of work 'A Street of Soldiers and At Rest'.

A Street of Soldiers is made up of 29 ambrotypes of current male residents of Altrincham, aged between 16 – 47, in order to reflect the ages of the soldiers from Chapel Street who failed to return. Ambrotypes are photographs exposed directly onto glass using the wet plate collodion process, popular in Victorian times; these are taken on a Thornton Pickard camera, built in Altrincham in 1908. 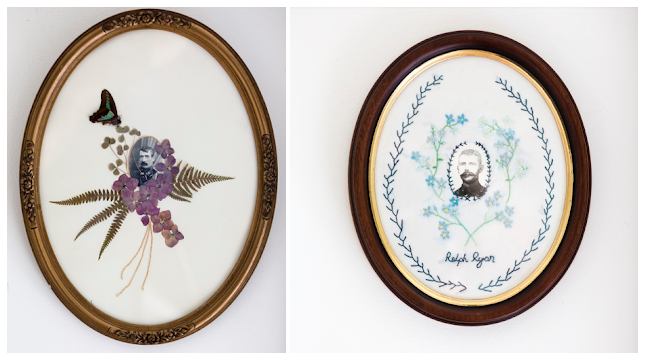 At Rest by Carole Evans

At Rest uses original photographs (of which the artist could only find nine) of the soldiers to create photographic memory objects, a popular method of remembrance in the Victorian era.

The artist places herself in the shoes of the women who are left behind, by combining the photographs with crafts such as embroidery and pressed flowers.

The exhibition coincides with the launch of a new publication, bringing together these bodies of work alongside archival photographs, artefacts and more information on Chapel Street.

Carole Evans is a photographic artist and curator. Brought up in Altrincham, she now lives in London where she is Associate Senior Lecturer in Contextual Studies at Ravensbourne University.

In 2013 she organised the Altrincham Arts Festival, in which empty shops became temporary art galleries. She is also co-founder of Portrait Salon, a salon des refuses of images which have been rejected from the Taylor Wessing Portrait Prize at the National Portrait Gallery.

St John on Bethnal Green is a Grade 1 Listed Building designed by Sir John Soane, and was built between 1826 and 1828.

IMAGES: From the series A Street of Soldiers and The Bravest Little Street by Carole Evans