ONLINE: Now and Forever: British, French, and American Soldiers on the Western Front, 1918

This event will be live and online

The final year of the First World War saw British, French, and American forces undertake joint operations on the Western Front. By the end of 1918 the nations of the Entente alliance stood victorious on the Western Front. Through their joint efforts the German army had been beaten into submission. However, the year had begun with a series of German attacks that threatened to bring the alliance to its knees.

This talk will examine how relations between the soldiers of Britain, France, and America ebbed and flowed over the course of the year and how the alliance narrowly avoided collapse in the Spring, delivered victory in the Autumn, and began to disintegrate following the Armistice. 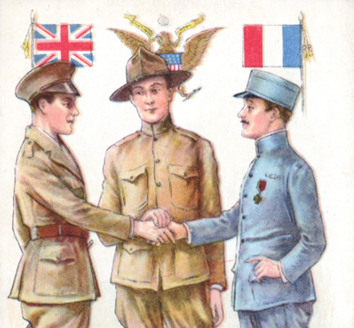 Dr Chris Kempshall is an historian focusing on allied relations in the First World War as well as popular representations of warfare. He is a Senior Research Fellow at the Centre for Army Leadership, Royal Military Academy Sandhurst.

He is the author of; The First World War in Computer Games (Palgrave, 2015) and British, French and American Relations on the Western Front, 1914–1918 (Palgrave, 2018). He is also writing History and Politics in the Star Wars Universe due to be published by Routledge in 2021.

It is also possible to register by clicking this link: Now and Forever

Your Computer, Your Home
ONLINE: Now and Forever: British, French, and American Soldiers on the Western Front, 1918, office@westernfrontassociation.com