ONLINE: Tank Corps operations during the German Spring Offensive of 1918

The March Retreat, the German offensive from 21 March to early April 1918, was one of the greatest battles ever fought. In this presentation, Geoffrey Vesey Holt will describe how, on the 21 March, 62 German divisions supported by 10,005 artillery pieces inflicted on the British Army one of its greatest defeats including the loss of 21,000 prisoners.

The 204 tired Mark IV tanks and the 36 new Medium A Whippet tanks, manned by just converted crews, would, given their number alone, not be able to make a decisive contribution. Nevertheless, as this talk will show, and thanks to the surprisingly good Tank Corps records, they did play a useful role. Despite Fuller’s later claims Haig and his staff followed HQ Tank Corps doctrine in the deployment of the tanks.

As a result, 2, 3 and 4 Tank Brigades provided useful support to Third and Fifth Armies. This included for example the charge of 2nd Tank Battalion which stopped the Germans from breaking through on 22 March, 8th Tank Battalion preventing the encirclement of two British divisions on 24 March and, on 26 March, 12 Whippets, in their first major action, stopping at the last moment a German break-through and demonstrating the virtues of relative speed. 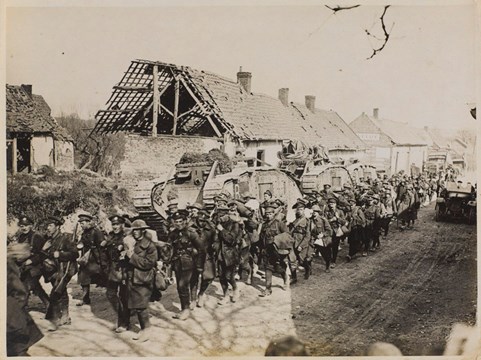 It is also possible to register by clicking this link: Tank Corps during the German Spring Offensive

Your Computer, Your Home
ONLINE: Tank Corps operations during the German Spring Offensive of 1918, office@westernfrontassociation.com