ONLINE: ‘The Big Brain in the Army’: The Rise of Sir William Robertson from Trooper to Chief of the Imperial General Staff

Sir William Robertson is an important but underrated figure in in the story of the British Army. In this presentation, Ross Beadle will look to explain more about 'Wully'.

Apart from being a larger than life figure Robertson has two major claims to have shifted the course of history. He remains to this day the only man to have risen from the lowest rank to the very highest – from Private to Field Marshal. Then, following his appointment as Chief of the Imperial General Staff in December 1915 it was his strategy that dominated British Government policy to the end of the war. Because of the conventional focus on Haig and the BEF, this is often lost sight of, as  he tends to be seen merely as Haig’s ‘man of business’ in London. This talk addresses both these aspects of his life.

Firstly there is an examination of his rise through the ranks and the profound obstacles he faced. Just because the purchase of commissions had been abolished in 1871 does not mean that the Army had necessarily become more meritocratic. It had not. Secondly in his two different roles 1914-1915, Robertson was the only completely unalloyed success among the senior officers in the BEF. That was why he was promoted to CIGS. Finally we look at Robertson’s analysis on how the war should be fought  and how he imposed his strategy on a reluctant Government. His approach to how to fight the war was by no means identical to Haig’s and Robertson was the only realistic alternative to Haig as a replacement for Sir John French as commander of the BEF. 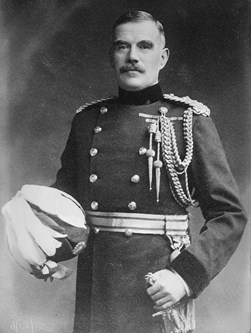 To subscribe to Trench Lines, go to the homepage of The Western Front Association web site and complete your details in the 'Newsletter sign up' box.

It is also possible to register by clicking this link: The Big Brain in the Army

Please Note:  Once registrations hit capacity (we have a 1000 limit on the webinars) then you won't be able to register. If this happens, you can still watch the event via the Facebook Live Stream (subject to any technical hitches) on our Facebook page. Alternatively, these are loaded to our YouTube channel where they can be watched a few weeks after the event.

Your Computer, Your Home
ONLINE: ‘The Big Brain in the Army’: The Rise of Sir William Robertson from Trooper to Chief of the Imperial General Staff, office@westernfrontassociation.com