SPECIAL OFFER: 'Two Sides of the Same Wrong Penny: Gallipoli and the Western Front: A comparison' edited by Michael LoCicero with contributions from Gary Sheffield, Stephen Chambers and others.

Announcing the launch of the Western Front Association / Helion publication: 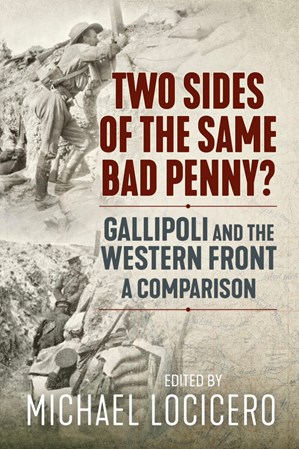 Two Sides of the Same Wrong Penny: Gallipoli and the Western Front, A Comparison

The year 1915 saw the BEF severely challenged on the Western Front. Recovering from the loss of the majority of experienced regulars in 1914, a largely new army had to come to terms with the realities of a major Continental war. They were short of manpower, firepower, and experience. Understandably, they gave a patchy performance in fighting a modern war with such lack of resources.

Despite the problems faced on the Western Front, the British had a global role and made a commitment to fighting on a second front at Gallipoli.  After the failure of the navy to force the straits, there was a hastily improvised land campaign which meant that the British were simultaneously committed to a continental war and an old style colonial war. This further strained an inadequate materiel and human resource base. The improvised collection of Regulars, Volunteers and Dominion forces who fought at Gallipoli faced the same issues of confronting defenders who had the advantage of favourable terrain. Their situation was made worse by the lack of any opportunity to learn the ropes in a quiet sector. As Gary Sheffield observed, Gallipoli and the Western Front were "two sides of the same bad penny".

This book is based on a series of papers presented at a joint Western Front Association/ Gallipoli Association Conference which looked at the similarities and links between the two Fronts. Several authors have submitted additional chapters. Many aspects are covered, and questions answered. There are several parallels during 1915. There was a strained logistics and supply chain on the Western Front which was further compromised by the need to supply a second Front at the end of a very long supply chain. As well as a shell shortage on the Western Front there was a totally inadequate number of artillery pieces available for Gallipoli.  Did the forces at Gallipoli suffer in comparison to the Western Front in supply of new munitions and weapon technology? How did the terrain influence the fighting options, for example, tunnelling? Was there a sense of the development of an Irish identity in 1915?

Several chapters look at events after 1915. Many units and commanders went on to fight on the Western Front after Gallipoli and several themes are considered. As examples, links to the Somme and the success in the final 100 days of Commanders who had fought at Gallipoli. Moreover, did the Australian and New Zealand experience at Gallipoli provide transferable skills appropriate for fighting on the Western Front? This volume also covers photography at the respective fronts and the portrayal in film post war. The little known story of the role of Canadian nurses transferred from France to Gallipoli is told with accompanying rare photographs.

It is impossible to cover all aspects of the Western Front and Gallipoli, but the chapters herein provide a good representation of the possibilities and point the way for further comparative studies.

During the check out process, when prompted for a voucher or discount code use this code. This will reduce the price of the book down to £18.