After launching an appeal for volunteers to work on Project ALIAS in mid-February, just over a week into the scheme it's probably useful to share very early results.

The idea behind Project ALIAS is to identify the thousands of men who served in the army (and Navy and Airforce) but did so under a pseudonym. It is believed there are many thousands of these men who have previously gone un-recorded.

The full background of the project can be found on THIS ARTICLE which sets out the idea behind the scheme.

Over seventy volunteers have come forward, and have been tasked with looking at all men recorded by the Commonwealth War Graves commission who (according to the CWGC) were killed whilst using an alias.

So far, nearly half of the approximately 3,500 men recorded by the CWGC have been looked at. This has proved to be eye-opening, in that a disproportionate number of these men are from Australia and Canada. It would seem that the 'Dominion' recording of aliases was far better than that in the UK. This makes the project even more important as it confirmed the initial thought that not all men who served using an alias were recorded by the CWGC.

It has also come to light that the WFA's pension records detail many men (who were killed and whose relatives claimed a pension) but whose aliases are again unrecorded.

The aim of this project therefore will be to try to construct - as fully as possible - a database of men who served using an alias, whether or not that alias is recorded by the CWGC. We will also seek to make these men 'findable' using the WFA's Pension Records and submit cases as appropriate to the Commonwealth War Graves Commission. This will be a monumental task, but one that can be achieved, if we have volunteers come forward from the WFA's members.

Here are some early examples.

James HYAMS (alias James Ames) served in the Army Service Corps but seemingly died of disease on 16 April 1916. Buried in Lincoln as HYAMS, the CWGC are unaware of his alias. 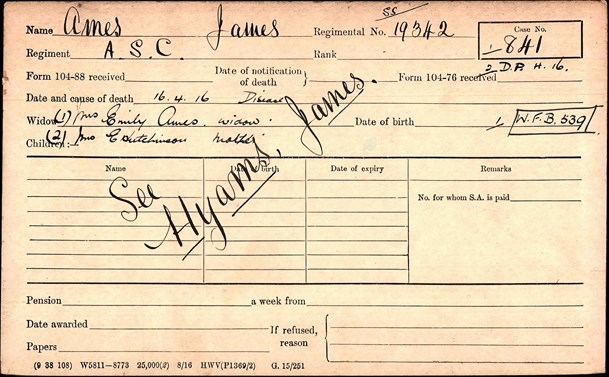 Not all servicemen were in the army. W Bailey (alias Pannell) seems to have served on HMS Good Hope. He is commemorated on the Portsmouth Naval Memorial as 'Pannell', but again there is no reference to the 'alternative' name in the CWGC entry. 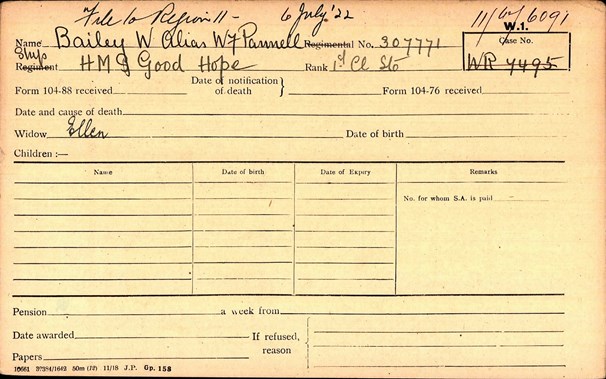 Thomas Errington was in the 1st Royal Inniskilling Fusiliers and died of wounds (according to the card below) on 11 August 1916. But why the alias of Armstrong? And why is this unrecorded by the CWGC. 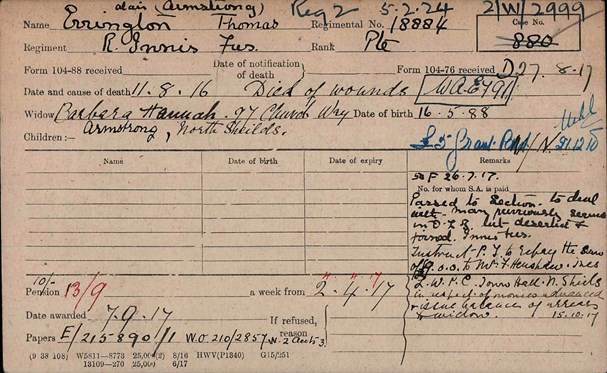 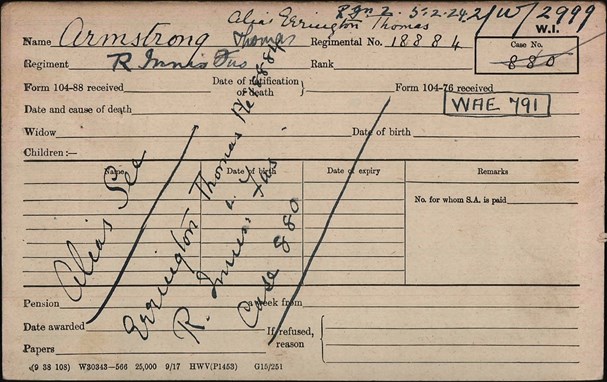 Would you like to take part in this really worthwhile project.

All we need is some of your time and you to log onto the WFA's Pension Records via the WFA web site.

If you can spare even a couple of hours a week, that's all we need.

With the support of the enthusiasm and knoweldge within the membership of the WFA, it will be possible to make a massive contribution to the understanding of the men who elected to join us using a name other than their 'real' name.

To paraphrase Lord Kitchener: The WFA needs YOU !!!

To find out more email pensionrecords@westernfrontassociation.com