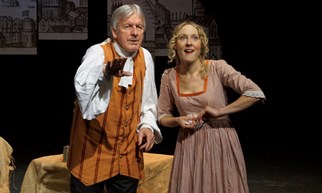 Over a hundred years ago,  a soldier in the trenches, Edwin Hassall of Leek found a Nestlé chocolate packet in a trench, recently taken from the Germans, during the fighting of the Battle of the Somme. On the packet (now empty)  was written : From Little Joan, White Rock, Wadebridge, Cornwall.

Touched that the children of England were thinking of the soldiers, Edwin  Hassall wrote to Little Joan, and we have the most extraordinary sequence of letters as a result.

Who was Little Joan? Did she ever meet her Chocolate Soldier? And did he come through all right?

The true story of the letters, edited and arranged by Kate Glover, is told movingly in a cabaret style performance with 3 professional actors  and a pianist with songs and poetry from the period.

Directed by Kenneth Michaels this is a piece that resonates today.

The Club For Acts and Actors

All Hallows by the Tower

Significant World War One associations: Tubby Clayton, Vicar for 40 years, served as  Army Chaplain in France and Flanders. He also founded Talbot House (Toc H) as a place of rest for soldiers on the Front.

Information on the forthcoming  Autumn and Armistice Tour at Historia Theatre