[This regular item by Dr Dominiek Dendooven, researcher and curator at the In Flanders Fields Museum, detailing recent and forthcoming events around Ypres was first published in the August edition of Bulletin, the in-house member magazine of The Western Front Association. It is sent to members three times a year]. 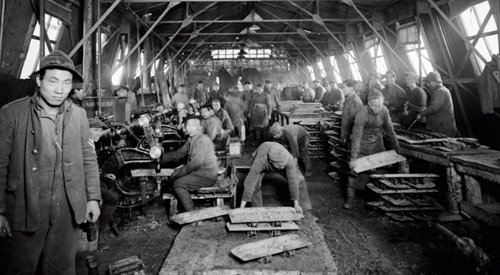 It is the 25th time I have had the honour to report to the members of the Western Front Association events happening in Ypres, arguably the world capital of First World War commemoration.

Interestingly enough, I do so in a short time gap between a professional visit to China, and my family holidays. I visited China on the invitation of Shanghai University in preparation for a summer school that takes place in Ypres from 15 July to 12 August under the title ‘Tracing CLC’ (Chinese Labour Corps).

My trip to China had two other reasons besides preparing for the visit of fifteen Chinese students and two professors to Ypres: these were visiting some museums who might be interested in hosting an exhibition on the CLC, and visiting some sites related to the history of the CLC.

Besides Shanghai and Ji’nan - capital of the province of Shandong where the vast majority of the Chinese labourers came from - an extensive visit to Qingdao was also scheduled. Qingdao - in the West also known as Tsingtao (the beer of the same name is brewed here) - is the place where not only most of the Chinese labourers boarded ships en route to the Western Front, but where the only battle of the First World War in the Far East took place.

At the foot of Bismarck Hill, a totally new First World War Museum opened its doors in 2018 (see separate text). This museum, the summer school and the interest in China in the country’s involvement in the First World War is a sign of the times: the study of the Great War has moved beyond Europe and now includes nearly the whole world.

At ‘In Flanders Fields Museum’ (IFFM) 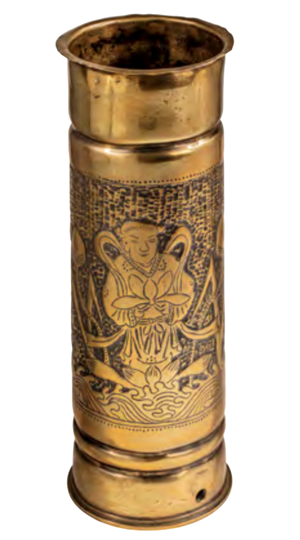 Between 1917 and 1920, more than 135,000 Chinese workers served the allied war effort in Western Europe. In addition to more than 36,000 Chinese workers in French service - employed all over France - there were approximately 98,000 members of the Chinese Labour Corps. With their labour they assisted the British army behind the front and along the lines of communication in Flanders and Northern France. Today there is relatively little that reminds us of the Chinese presence. Yet the Chinese labourers from the First World War left a unique artistic heritage: dozens of beautifully carved shell cases and other war scrap.

In the early weeks of 2019, IFFM was the beneficiary of a donation of twenty-seven shell cases engraved by members of the CLC. As a result, the museum now possesses the largest public collection of Chinese trench art from the First World War. The main donor was WFA member James Brazier, whose bond with Ypres goes back many decades. In the 1960s he visited the city and the battlefields of the First World War. He is probably not unfamiliar to many readers of this edition of Bulletin as he later was a founder member of the WFA. James Brazier’s interest always went out to the common man in the war and to their souvenirs, including trench art. This new exhibition is by consequence also a tribute to him and his vision.

On the occasion of this dossier exhibition, a new IFFM file has been published in which all the Chinese trench art items in the museum are meticulously catalogued, described and explained. 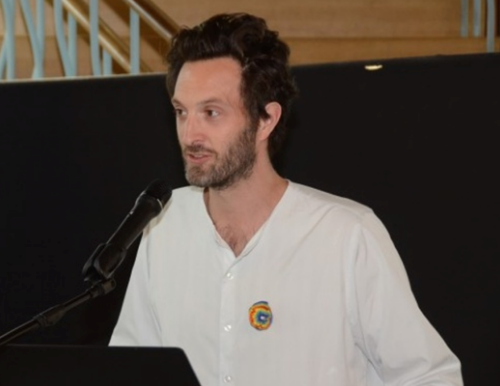 This year’s artist-in-residence at IFFM is Belgian Fabrice Samyn. In the collections of the museum, Fabrice discovered 6,000 letters from and to soldiers, which had hardly been studied so far.

During part one of his residence (February- April 2019), the Belgian artist, assisted by a group of volunteers for the occasion baptised ‘speleologists of joy’, read these letters to search for all possible signs of ‘joy’ amidst pain and violence: the power of camaraderie, joy for others, hospitality, consolation, romantic love, love between parents and children, memories, humour, happiness, sensual pleasure and the beauty and wonders of nature. They also counted the number of kisses that the writers exchanged in their letters.

The second part of his residence started on 5 July, and takes place in the museum. There Fabrice built a mailbox in the shape of a dovecote. Next to it is a table with paper and writing utensils, an invitation to all visitors to write a letter from the trenches of their lives, about the pain they are confronted with. Visitors can add their address and post their letter in the museum. (They can also send it to Fabrice Samyn - Correspondence piece VI-Kenniscentrum-Sint-Maartensplein3, BE-8900 Ypres, Belgium).

The volunteers and the artist promise to answer all the letters with an excerpt from the war correspondence and thus share a glimpse of our resilient potential. (To protect confidentiality and privacy, the letters sent to the museum will be destroyed and their contents will never be revealed). 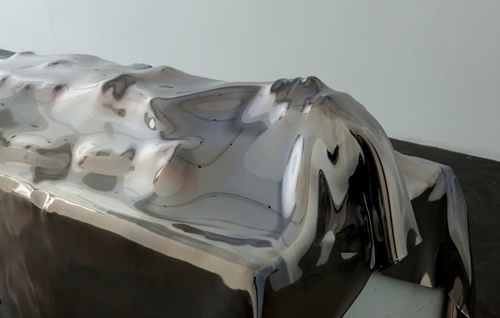 Fabrice Samyn's work is on display until January 2020.

Temporary Exhibition ‘To End all Wars’: An Assessment of the First World War’ 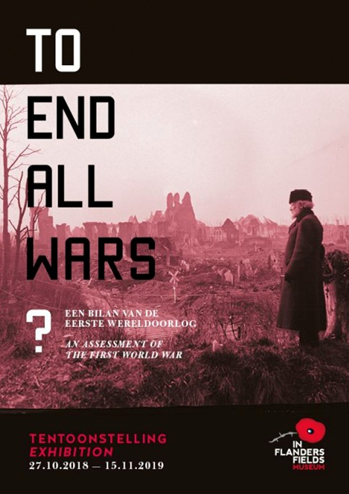 This major temporary exhibition, on display until 15 November 2019 considers the outcome of the ‘War to End all Wars’.

When the German Empire and the Allied Forces signed an Armistice on the 11th of November 1918, it was said that this would put an end to the war to end all wars. Nothing could have been further from the truth. While it did put an end to the war in Western Europe, it didn’t in the east nor in the south of Europe. The peace that ensued after the Paris conference, rather than end wars, would become the cause of many later conflicts.

Even today conflicts are raging whose roots can be traced back to Paris 1919. To End All Wars? puts the cards, or rather the maps on the table. The maps of the war, the ultimate battles leading up to Armistice, and the maps of the new world order that followed. Age-old empires vanished, and new countries emerged on paper. Lines on maps would henceforth determine the new future of hundreds of millions of people. As the war has so often demonstrated, those lines would mainly serve to dash the hopes of many people.

In the exhibition the visitor is not only confronted with the tremendous impact of the war on one family from a village near Ypres, but also how, in Paris, in 1919 many borders have been redrawn with consequences lasting until this very day. 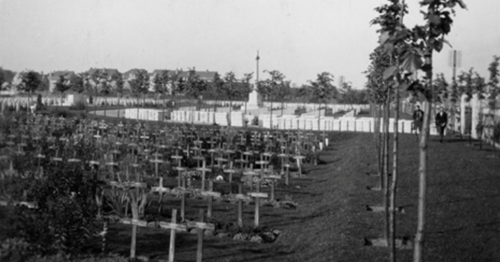 On 14 May 2019 at Oosttaverne Wood Cemetery a rededication ceremony was held for Captain Cecil Thomas Tuff of the 1st battalion, the Royal West Kent Regiment. Captain Tuff, aged 29, was killed in the night of 18-19 April 1915 on Hill 60 while leading his company. His body was left behind and after the war he was buried as an unknown captain of the West Kents. After a recent identification, his grave was given a new headstone with personal details. The ceremony was attended by some family members.

At Tyne Cot Cemetery, on June 19th 2019, a rededication service was held for Captain William Miles Kington whose grave has now been officially identified thanks to the efforts of Michiel Vanmarcke and two other researchers. After previous service in the Boer War, Captain Kington of the 1st battalion, Royal Welsh Fusiliers, was killed on 20th October 1914 at Broodseinde. The ceremony was attended by his great grandchildren.

On 27 June 2019 seven unknown French soldiers of the Great War have been re- interred in the French Cemetery of St Charles-de-Potyze on the Zonnebeke Road.

The OBE for Paul Breyne

Paul Breyne, former minister in the Belgian government, former mayor of the city of Ypres and former governor of the province of West-Flanders has been awarded the OBE. He received the decoration on 22 May 2019 in the Ypres town hall from the hands of Mrs Alison Rose, British ambassador to the Kingdom of Belgium. The award is a recognition for Mr Breyne’s work as the Belgian government’s commissar for the commemoration of the First World War in 2014-2018.

A new Māori memorial in Zonnebeke 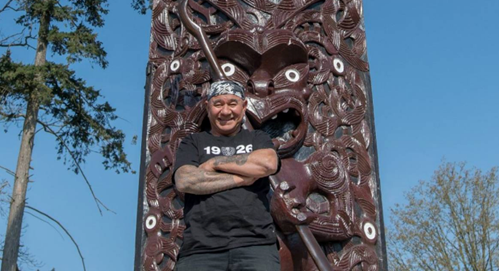 On ANZAC Day, 25 april 2019, a new eight meters tall Māori sculpture has been unveiled in the Passchendaele Memorial Park in Zonnebeke. The ‘pou maumahara’ is a wooden memorial made by students and teachers of the NZMACI (New Zealand Māori Arts and Crafts Institute) and it commemorates the Māori and other New-Zealanders who served during the First World War. The memorial has two sides, representing Tūmatauenga (war) and Rongomaraeroa (peace).

11 November 2018 marked the end of the impressive land art installation ‘Coming World Remember Me’ which commemorated the 600,000 fatal casualties of the Great War in Belgium. From 2014 to 2018 members of the public had created 600,000 sculptures designed by the reknowned Belgian artist Koen Van Mechelen and these sculptures had been on display since late March 2018 in the former No Man’s Land of 'The Bluff' at De Palingbeek provincial park in Ypres. From the 15th of November 2018 the installation has been dismantled and thousands of statuettes given away. Now, using 200,000 of these statuettes, a new permanent memorial has been created near the Bluff. 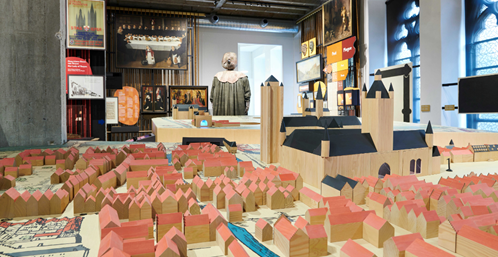 On 1 July 2018 a brand-new museum has opened in the Ypres town hall adjacent to In Flanders Fields Museum: the Yper Museum, using the old Flemish name of the town. This long due museum focuses on the history and art of Ypres beyond the First World War.

Ypres was one of the major cities of Europe during the late Middle Ages while its ramparts and (reconstructed) churches bear witness to the centuries before its destruction in 1914. Drawing from the collections of three former museums (the municipal museum, the Almshouse Belle museum and the municipal museum of Education) the new Yper Museum offers the visitor a engaging introduction to the history of Ypres.