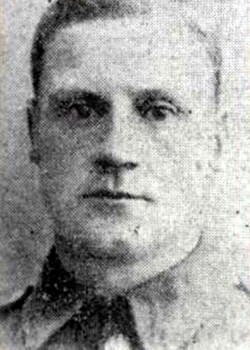 He was married to Ada Wilson, a cotton weaver, and lived at 57 Marlboro' St, Burnley. In 1911 Stephen was sharing accommodation with his young family, a 4 year old son Walter, and his sister and brother who worked in turn in a cotton mill and mine. At the outbreak of war Stephen and Dad had a daughter, while Ada was born in October 1914, and Stephen in March 1917.

Pre-war, Stephen had seen seven years service in the Reserves and re-enlisted into the Territorials (5th Bn East Lancs) in August 1914.

After serving in the UK with the 2/5th Battalion for over 2 years, he embarked for service on the Western Front in March 1917.

Initially serving near the Flemish coast, Stephen was soon embroiled in the 3rd Battle of Ypres following which he fell ill and was evacuated to the rear.

Age 37, Stephen died of sickness in the 24th General Hospital, Etaples on 1st January 1918. He is buried in Etaples Military Cemetery, France. 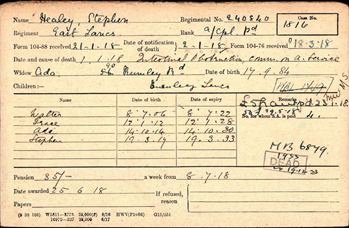 Above: The Pension Record Card for Stephen Healey - one of millions of pension records saved by the WFA and available for members to access.