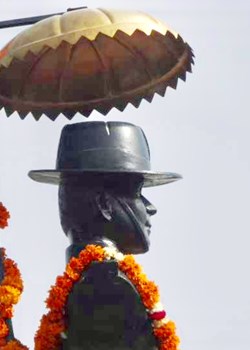 Singh Negi joined 2nd Bn Garhwal Rifles October 1913. He was sent to France from India as part of the Indian Expeditionary Force at the end of September 1914. Making it to Marsellies, they were trained north to Orlean and beyond. Gabar Singh Negi took part in the Battle of Neuve Chapelle in March the following year. 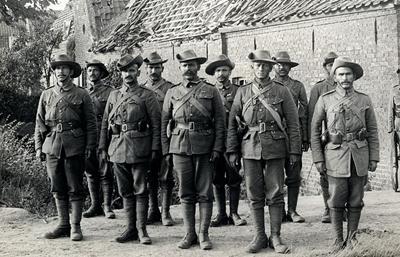 The night before the attack at Neuve Chapelle, on 9 March 1915, the Bareilly Brigade went out to cut paths through the enemy wire and set up bridges across trenches. The Garwhal Rifles, amongst them Gabar Singh Negi, got into position ahead of the pending attack by 4:30am on the morning of 10 March.

Gabar Singh Negi would have been in the front line trenches. At 7:00am a heavy German bombardment began, followed half an hour later by the British guns. At 7:30am the artillery of the Meerut Division reinforced by the Lahore Division and heavy guns began to fire with the purpose of destroying obstacle and trenches, hindering reinforcement from the rear and supporting the attack. The noise was phenomenal and later described as “one huge scream’ and “as if one were standing under an enormous railway bridge over which thousands of express trains were passing at lightning speed”.

There would be no surprise to this attack.

Aeroplanes were sent over to try and bomb individual strategic targets such as the railway bridge at Menin.

Gabar Singh Negi was one of the bayonet party supporting the bombers. He was among the first over the top attacking on the right. Crawling on their bellies to cross neutral ground enemy shells flew so low that they reportedly took off a rifleman’s head. At exactly 8:05am their bombardment ceased the men got up and rushed the enemy trenches. Pressing through the destroyed remains of Neuve Chapelle Gabar Singh Negi made it through each line to the main enemy trench. Here, as he turned into each traverse, he bayonetted his way through fulling the brief to clear the trenches and make contact with the 25th Brigade and so filling a potential gap in their line. Gabar Singh Negi was instrumental in the capture of a German machine gun unit and forcing many to surrender.  When the officer leading them was killed Gabar Singh Negi took the lead. 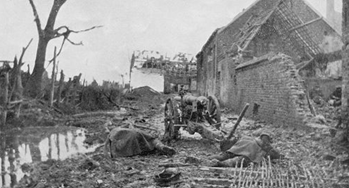 His gallantry observed and note he was posthumously award the Victoria Cross. Others like him achieved similar feats. Rifleman Gane Gurung single-handedly took eight German prisoners and Jemadar Pancham Singh Mahar won the Military Cross for leading a party against enemy fire, capturing a machine gun and prisoners.

The Garwhalis completed the task as commanded them, consolidated their position, then searched through the wreckage of the town for snipers.

Satoori Devi, his young wife, barely 14 years of age, never remarried. She wore her late husband’s medal with pride throughout the remainder of her life. 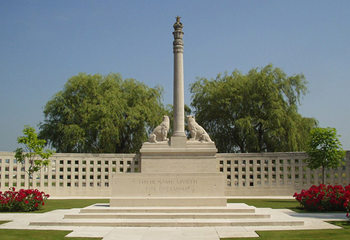 Today the Indian Memorial on the southern edge of Neuve Chapelle approximately marks the British outer line reached on 10 March 1915. The Neuve Chapelle Memorial commemorates over 4,600 Indian soldiers who fought on the Western Front who have no known grave. 39 of these men were cremated at the Chattri at Patcham Down, Brighton. The Neuve Chapelle Memorial was unveiled by one of the authors quoted as a source, F E Smith, Earl of Birkenhead, Secretary of State for India. It is on the La Bassée-Estaires road, known during the war as Port Arthur. The opening ceremony on 7 October 1927 was attended by, amongst others, Rudyard Kipling, the Prime Minister David Lloyd George and the former commander of the Indian Corps, General Sir James Willcocks. India was represented by the Maharaja of Kapurthala and a contingent of Indian Troops. 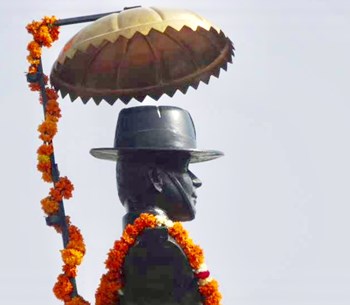 > : Memorial to Indian soldiers at Neuve Chapelle, France' by K.J.S.Chatrath