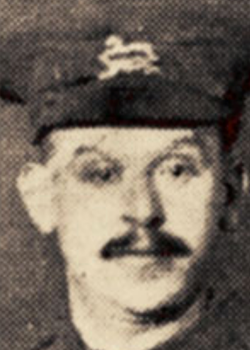 Born at Biggleswade, Bedfordshire in 1878

At the 1911 Census, Harry is given as a 'blacksmith on a washing machine shop'. At the time he was living with his 72 year old widower father in law, his sister-in-law, and his own wife and three children.

By the time of the war Harry had taken up dobby making at Hill Brothers in Keighley. A 'dobby maker' was someone who made the mechanism attached to a loom for weaving small patterns. He is also married and the father of four: William, Sarah, Herbert and Fred. 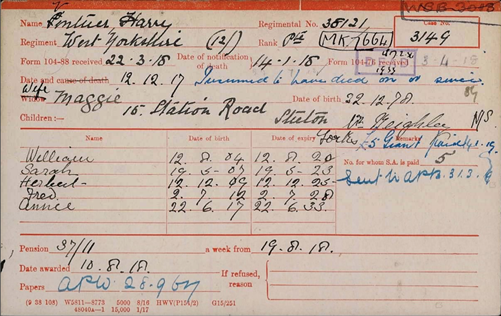 Conscripted in October 1916, Harry reported for duty at Steeton, Yorkshire before embarking on his training. He was sent to the Western Front in January 1917 where he was wounded and gassed in late September of that year.

After recuperating at a base hospital, he rejoined his battalion in November but he was killed in action during a heavy German raid on his trenches in the vicinity of Noreuil on 12 December 1917.

Unfortunately, Harry's body was lost in the fighting and he is now commemorated on the Arras Memorial to the Missing.

[The Pension Record archive, saved by The Western Front Association, and available to WFA members for free includes some 6 million such records, around 54% of which have thus far been digitised, transcribed and put online].