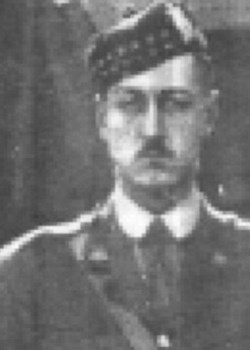 Captain Harold Mackenzie Deans was born at 18 Minet Avenue, Willesden, U.K., on 29 March 1894 the son of John Deans, an optician, and Nina Anne Deans.(1) From 1912 through 1914, Harold attended Edinburgh University where he studied medicine. He was a member of the Officer Training Corps. When the United Kingdom declared war on Germany on 6 August 1914, Harold applied for a regular commission and was accepted into the Cameron Highlanders. (2)

On 25 September 1914 Harold was sent to France where he was assigned to the 2nd Battalion of his regiment. In November he was wounded near La Bassée. In February 1915, he was promoted to First Lieutenant. In March 1915 he returned to France and was promoted to Captain in April. On 30 April Harold was again wounded. (3)

Harold served in the trenches throughout the winter of 1915 – 1916 but was evacuated home after he contracted trench fever. While he was recovering in Scotland he took a course on gas warfare in which he excelled. In 1916, he married Helen Margaret Dickson.(4)

Harold was appointed as an Assistant Instructor in Gas to the British Military Mission to the United States Army on 14 November 1917. Harold was assigned to the 27th Division at Camp Wadsworth, South Carolina where he was in charge of the division Gas School.

Major General O’Ryan described Captain MacKenzie as an ‘exceptionally able and industrious officer, who knew from practical experience and suffering the importance of efficient gas defense….’ (5) For his work in preparing the 27th Division for combat in France, Harold was mentioned in division dispatches:

“For exceptionally meritorious and conspicuous service. As a member of the British Military Mission, attached to the 27th Division, this gallant and accomplished officer, himself a victim during the original enemy gas attack in the first battle of Ypres, conducted the training in gas defense with such zeal and intelligence as to impress its importance on all ranks to such excellent purpose that thereafter during active operation the application of this skilled instruction served appreciably to minimize gas casualties in the division. Upon relief from such detail this officer returned to active duty in the field.” (6)

Harold returned to France on 24 August 1918 where he was attached to the 7/8th Battalion of his regiment. He was offered an instructors job for six months on his return: however, he was feeling in much better health, so refused it saying ‘…It would not be playing the game to take on another "soft job" when fit men are wanted so badly at the front.’ (7)

On 17 September 1918 Captain Deans was leading a raiding party to capture enemy prisoners for interrogation. Upon entering the enemy trench Captain Deans was struck by a machine gun bullet through the heart killing him instantly. (8) He was 24 years of age. Captain Harold MacKenzie Deans is buried at the Philosophe British Cemetery, Mazingarbe, France: Plot III, Row F, Grave 24. (9)