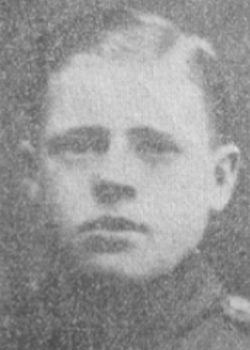 'Missing in action' within two weeks of being posted to Mesopotamia

Frederick was born in 1897. He was a weaver from Burnley, Lancashire.

He finally enlisted successfully into the Seaforth Highlanders in Burnley in 1915 after six previous attempts.

In April 1916 he was sent as part of a draft bound for the 1st Battalion, in Mesopotamia.

On 22 April 1916, having only been ‘in theatre’ for about a fortnight, he was posted as ‘missing in action’ during the ill-fated third attack on Sannaiyat (one of the attempts to relieve the besieged garrison at Kut).

Having no known grave, Frederick is commemorated on the Basra Memorial, Iraq.

'Remember: On This Day' is researched by David O'Mara.