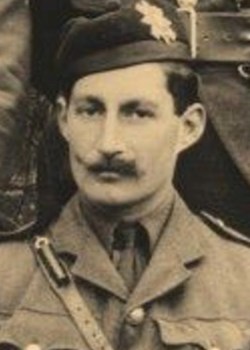 An uncle of Her Majesty the Queen.

His grandson wrote to the Commission in November 2011 after having visited Quarry Cemetery, Vermelles. He produced contemporary evidence that his grandfather had been buried in the quarry and that a grave marker with his name on it was still in place at the end of the war. The Commission's grave registration documents were found to record his burial in the cemetery in 1920, but these documents were superseded by the final grave registration forms, dating from 1925, which do not include Captain Bowes-Lyon's name.

Under these circumstances the Commission agreed that the evidence for Captain Bowes-Lyon being buried in the cemetery is sufficient to allow the erection of a named headstone within the cemetery. The special memorial headstone to Captain Bowes-Lyon is inscribed 'Buried near this spot' as there is no certainty about the precise location of his remains within the cemetery. The majority of the headstones in Quarry Cemetery, Vermelles, are, in fact, of this type as the cemetery remained in the front line after 1915 and suffered extensive shell damage before the end of the war. This made precise grave identification extremely problematic.

The new headstone was installed in the cemetery in 2012. 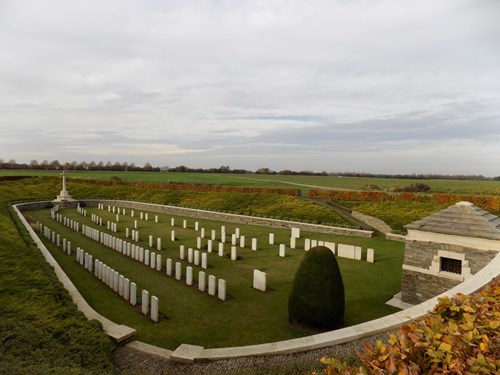 On 26 April 1923, Lady Elizabeth Bowes-Lyon married Prince Albert, the Duke of York (the future King George VI), at Westminster Abbey. Before the ceremony, Elizabeth (the future Queen and Queen Mother) laid her bouquet on the Tomb of the Unknown Warrior. This action set a tradition which has been followed by other Royal brides ever since (although now the bouquet is left after the ceremony). Whether the action by Elizabeth Bowes-Lyon was spontaneous or pre-planned is not known, but it is without doubt that her action was prompted by the memory of her elder brother, Captain Fergus Bowes-Lyon who was killed in the Great War.

The First World War was declared on what was Elizabeth's 14th birthday. Her birthday celebrations were probably quite low-key as a result of the declaration of war, not least because of her eight surviving siblings, three were serving officers in the Army. Patrick (the oldest of the brothers who was titled Lord Glamis) was a Major in the 1/5th Battalion, the Black Watch. Fergus was also an officer in this regiment, and Michael was a Second Lieutenant in the Royal Scots. A fourth brother, John (known as Jock) was a stockbroker but was to join his older brother in the 1/5th Black Watch.

Patrick, Michael and John went to France with their regiments in November and December 1914. Fergus, however, had been held back in order to help train the 8th Battalion Black Watch - one of Kitchener's New Army battalions. This battalion, part of the 9th (Scottish) Division, arrived in France on 10 May 1915.

Meanwhile, the two brothers in the 1/5th Battalion had found themselves involved in the preparations for a major offensive. Their battalion was part of the regular 8th Division and was to be engaged in the Battle of Aubers Ridge which commenced on 9 May. It is, however, not certain how much of the fighting Jock was involved in. It would appear that just prior to the battle Jock shot himself in the finger. This may of course have been entirely accidental but such injuries were often considered to be highly suspicious as possible "self inflicted wounds".

The Battle of Aubers Ridge was a failure but, later in the year, a much larger offensive was to take place, in which Fergus was involved. The Battle of Loos was, by a significant margin, the biggest battle the British Expeditionary Force was involved in during 1915. The 9th (Scottish) Division, with Fergus's 8th Black Watch, was to attack the position known as the Hohenzollern Redoubt: a warren of trenches that surrounded the mining complex of Fosse 8. Although the troops who attacked on 25 September were initially able to penetrate the Hohenzollern Redoubt, German resistance was fierce and, over the following days, only a small part of the redoubt remained in British hands. It was on the third day of the Battle, 27 September, that Fergus Bowes-Lyon was killed.

As with other families up and down the country, the shock of the death of a family member must have been severe. This tragedy was magnified after the war by the fact that Fergus's grave was lost; his name was added to the thousands of others commemorated on the Loos Memorial to the Missing, which surrounds Dud Corner Cemetery at Loos.

It may now be some comfort to know that a headstone is now in place at Quarry Cemetery, Vermelles. 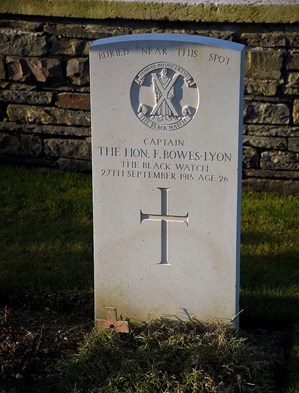 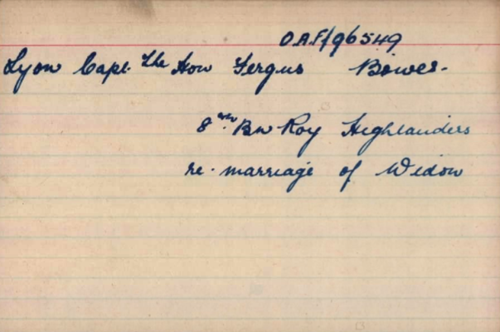 Born 18 April 1889. Eton educated. Next of kin given as Lord Strathmore.