George Henry Howlett was born in Shoreditch the son of George William Howlett, a metal worker from Norfolk, and Alice Harriet Davis from Gloucestershire.

George’s first period in the Royal Navy was from 1906, his civilian occupation on enlistment being a gas fitter. His initial posting was to the training ship HMS Impregnable, a 121 gun ship of 1860, originally named HMS Howe, before being renamed HMS Bulwark, and finally HMS Impregnable in 1885. He was declared unfit, except for shore duties, just over a year later, and left the service. 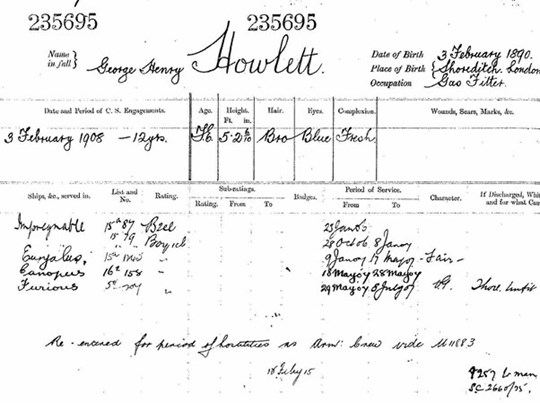 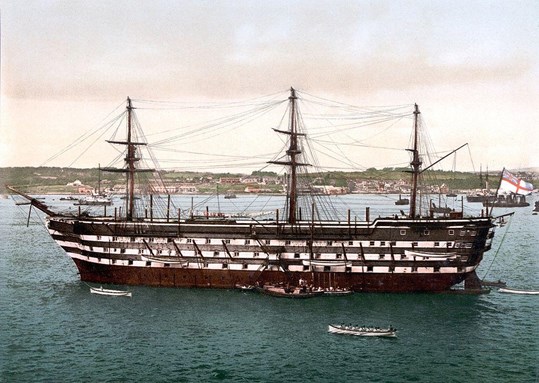 Rather unusually the family were found at the same Shoreditch address in the 1891, 1901 and the 1911 censuses, the 1911 census being shown below, by which time both father and son had becomeelectrical engineers.In 1912 George married Ada Sweeting, a milliner in the 1911 census. 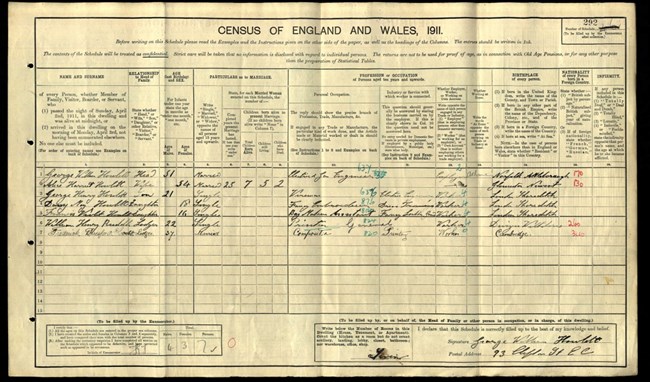 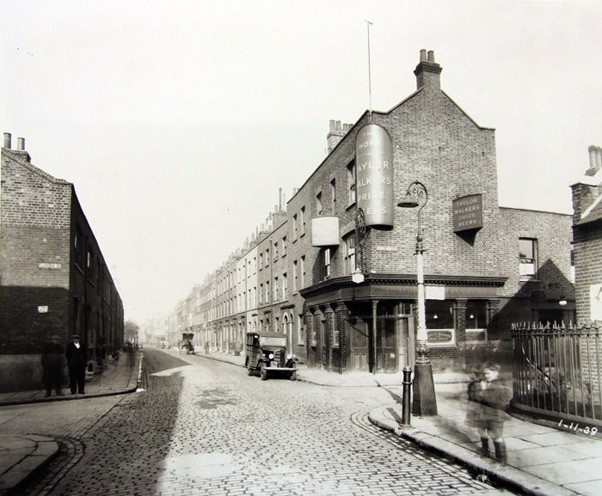 Above: Pollard Row, where George was living when he married Ada. Photo – www.theundergroundmap.com

The couple had just one daughter, Ada Alice Maud, born October 1913who was baptised in St James the Great, Bethnal Green. Sadly she died in 2Q 1914. 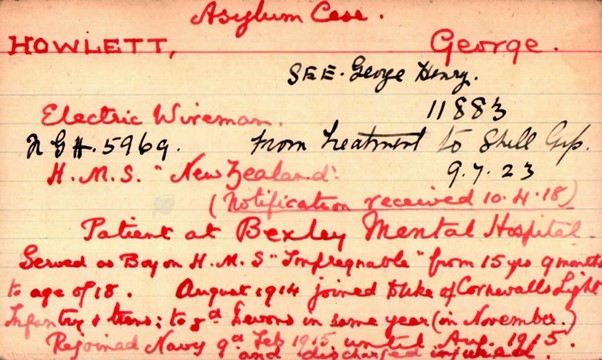 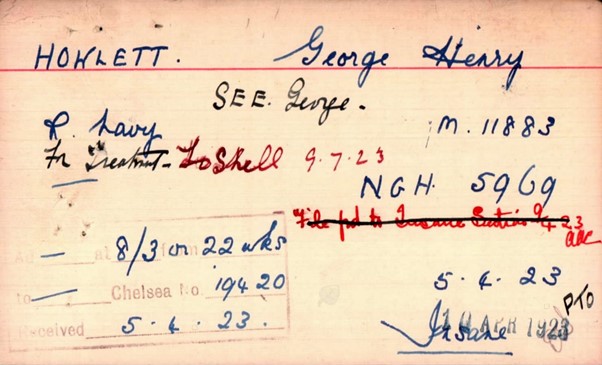 Above: the two pension cards that sparked off the research – the second card recording that George Howlett was receiving treatment.

Although the pension card states that he served with both the Duke of Corrnwall’s Light Infantry and Devonshire Regiment, there doesn’t appear to be any surviving record of this service. As stated on the pension card he re-enlisted in the Navy in February 1915. 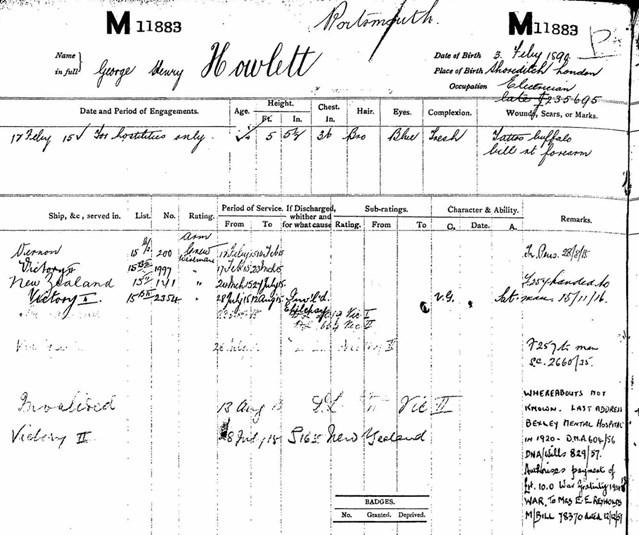 His main active service was in the battle cruiser HMS New Zealand, from 24 March to 27 July 1915. 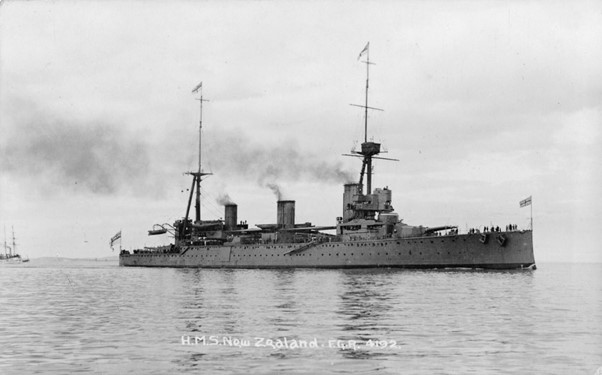 Above: HMS New Zealand, pictured immediately pre-war, during her tour of duty in 1913, when one of her destinations was New Zealand. Photo – nzhistory.govt.nz

In the following year, HMS New Zealand was very fortunate at Jutland on 31 May 1916, and became known as a ‘lucky’ ship. The following details are summarised from ‘The Fighting at Jutland’, published in 1921, being the narrative of the Navigating Officer of HMS New Zealand, and present on the conning  tower.

Captain John Green was wearing the Maori rush kilt, called a piu-piu, given by a Maori chief in 1913 on the understanding he was to wear it whenever the ship was in action. The chief’s prophecy was that she would be hit three times, in the after turret, fore-top and conning tower, but there would be no casualties. A green stone tiki was also given, to be worn round the captain’s neck, and much faith was placed on these mascots by the crew.

When action commenced, her sister battle cruiser HMS Indefatigable, following in line the regulation 500 yards astern, blew up shortly afterwards. A salvo then hit HMS Queen Mary, the next but one ahead of New Zealand. As HMS Queen Mary fell back she was passed on either side by HMS Tiger, and by HMS New Zealand, and promptly exploded, with some debris landing on New Zealand’s decks. Shortly afterwards New Zealand was hit, just the once, but in the after turret, and there were no casualties. There were two survivors from Indefatigable, and around twenty from Queen Mary, each from a complement of over a thousand officers and men.

Those who doubt the Maori’s prediction would do well to remember that the chief was absolutely certain that Green and the same crew would be aboard, despite the fact that any possible war was still in the future, and that the crew were scheduled to be replaced, this only being put off when war broke out.

After service in HMS New Zealand, George was subsequently posted to the shore base Victory II, from which establishment he was invalided with epilepsy in August 1915. He was awarded the Silver War Badge on his discharge, just six months after he had re-joined the Navy.

The 1915 Electoral Roll shows him living in Meadows Dwellings, Bethnal Green, off Mansford Street, the same location where his wife was living in 1911. This consisted of two four storey parallel blocks, and was relatively modern, being completed in 1894 by the East End Dwellings Company for working class familiesand built to replace slum dwellings.

By 1918 George was recorded as living at 3 Snowden Street, just off Shoreditch High Street, this would be his last known address outside of institutions.

On 27 March 1918, the poor law record records show that George Henry Howlett, a Pauper Lunatic of the Parish of St. Leonard Shoreditch, was removed to the London County Lunatic Asylum at Bexley Kent, at the expense of the Hackney Union. The Hackney Union seemed to be more intent on reclaiming money from the parish of Shoreditch than looking into his welfare. 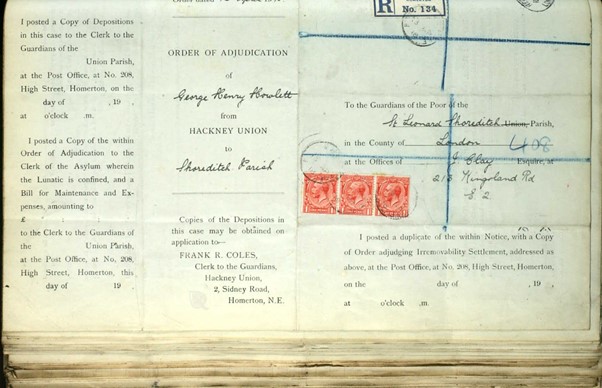 Above: Part of the Official Order for Removal of a Lunatic

Bexley asylum was opened in 1898 and renamed Bexley Mental Hospital in 1918. It was very extensive, housing some 2500 patients, and designed to be self sufficient, with male patients working on the incorporated farm, which had both livestock and a vegetable garden, and female patients operating the laundry. Since final closure in 2001 the site has largely been redeveloped for housing. 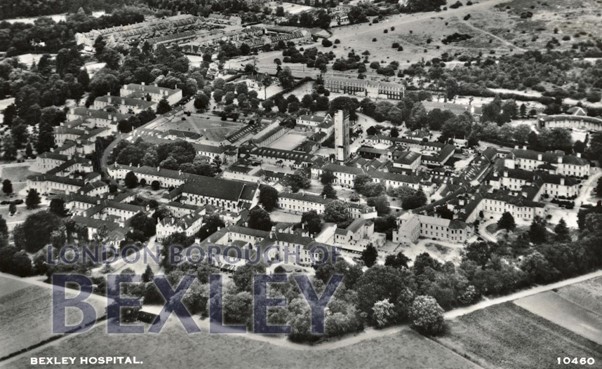 Quite why the Royal Navy claimed to be unaware of whether George was still at Bexley is not clear, but it is very sad indeed that George never received his war medal entitlement, the ‘issued or how disposed of’ column on the medal roll remaining blank, and with the remark ‘Mental Case’ added. Many other men were discharged from the Navy with ‘dangerous lunatic’ specified on their record and spent the remainder of their days in the Royal Navy mental home at Yarmouth, but did receive their medals, so maybe the authorities just didn’t make much effort to trace him. 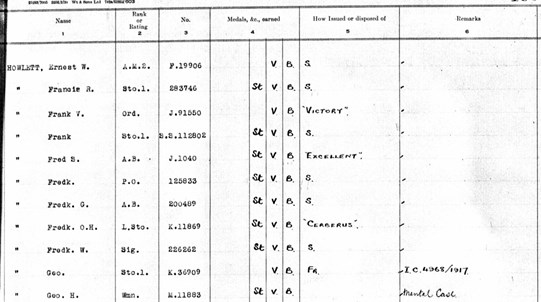 George remained at Bexley certainly up till 1939, as recorded in the register.

His death occurred 1Q 1949, aged 59 and was registered in the Dartford district, so it appears he spent over 30 years in the asylum.

There is strong evidence to suggest that his wife Ada married William C. Sweeting in the Hackney district in 3Q 1947, and two years before George’s death. Her name is recorded in the marriage index under both Howlett and Sweeting, suggesting she was divorced, and it is evident from the 1939 register that they had been living together for some time. Ada’s identity is confirmed by her mother’s name and age, as known from the 1911 census and also by the address in Mansford Street, at or near where the family had lived for many years. William Sweeting was almost certainly a close relative, perhaps a cousin, his occupation of house decorator matches that of Ada’s father, who was a painter. Her 1939 register entry, at 162 Mansford Street, is shown below; she is recorded as married, and William as single.

George’s ex-wife Ada was still living with her mother and husband, William, at the same address in 1952. However, her mother Alice died 4Q 1953, and Ada was recorded as living alone at this address in both the 1954 and 1956 electoral roll entries. It is not known what happened to William.

Ada Sweeting died on 8 December 1981, her address at probate being given as 9 Argos House, Old Bethnal Green, a retirement housing complex. Unusually, her death was registered not in London, but at Portsmouth, however her date of birth, as recorded in the deaths index, matches that found in the 1939 register.

One final mystery was the identity of ‘Mrs. E.E. Reynolds’ who received George’s war gratuity. This was clarified by finding his sister Edith Elizabeth’s marriage to Richard John Reynolds in 1908. Perhaps George and his wife had effectively ended their relationship by 1918, although no record of a divorce could be found.

This would seem to be a classic example of how an ex-serviceman, perhaps suffering from what might today be classified as ‘post traumatic stress disorder’, could be effectively forgotten by King and Country, consigned to an institution for life, and have his wife either divorce him, or possibly even enter into a bigamous marriage.