Alcohol in the trenches: the rum ration

The daily rum ration to British troops has its roots in the British Navy, dating back to the mid 17th Century when Britain captured Jamaica from Spain. Up until then, beer had been the staple beverage – and in some prodigious quantity, as the daily ration was eight pints! With the introduction of rum to the Navy, senior ratings would receive neat rum (one eighth of an imperial pint), whilst for junior ratings it was diluted in water to make three eighths of an imperial pint. It was usually given out to the crew at midday. 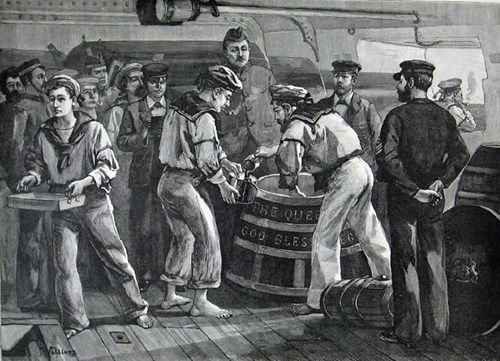 Above: a typical rum line

In the 19th Century, the amount of the rum ration was cut in half on two occasions (1823 and 1850). Attempts were made to abolish it in the latter half of the 19thCentury but these failed.[1]

During the Napoleonic Wars, soldiers received a daily ration of a pint of wine, or a third of a pint of gin or rum. By the time of the Boer War, the ration was ½ gill (less than half a pint) three times per week.

By the time of WW1, the rum ration was a more modest quarter of a gill – and usually served at morning and dusk stand to’s, and usually under the supervision of an officer. It was sometimes issued prior to an attack. 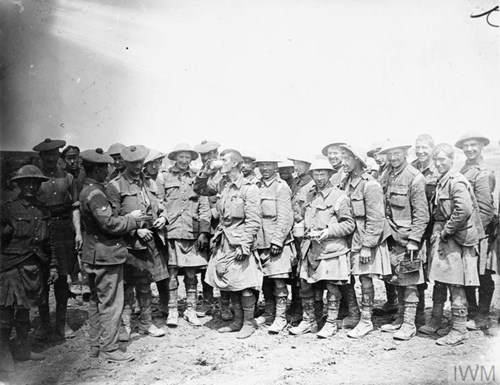 But not always under supervision (as it would appear from this photograph): 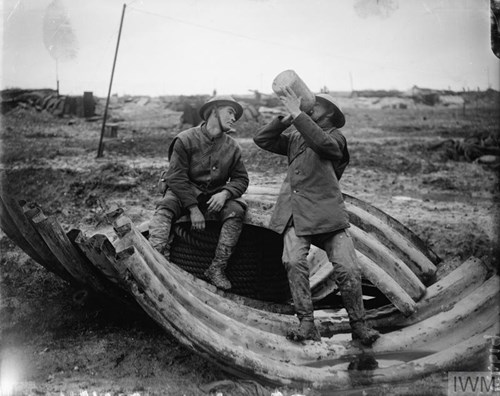 The rum ration was also sometimes added to tea: 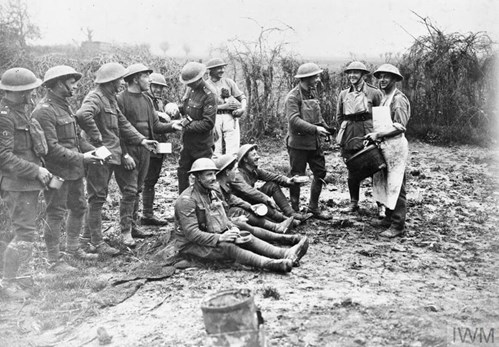 Above: Battle of the Lys: Issue of rum and hot tea to the troops of the Royal Field Artillery (55th Division); Bethune. Photo – IWM Q344

The rum was contained in large stoneware jars, holding one gallon of rum (sufficient for 64 men). 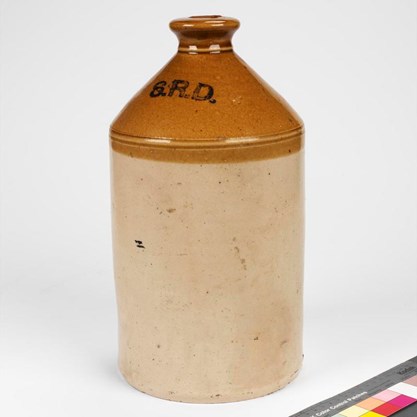 Above: a rum jar. The Initials SRD stand for “Service Rations Depot” – but were also known as “Seldom Reaches Destination” or “Service Rum Diluted”. 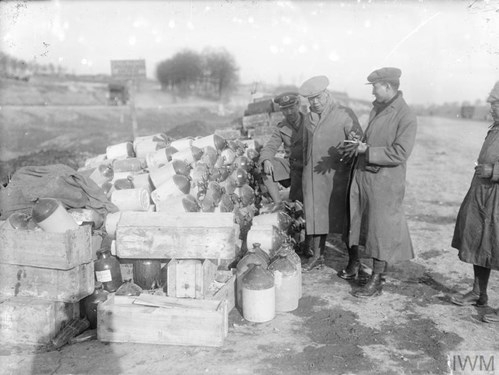 Inevitably, the rum ration became part of the coping mechanism for many soldiers, particularly when faced with poor weather and miserable conditions in the trenches. In the words of a Black Watch medical officer ‘had it not been for the rum ration, I do not think that we would have won the war’.[2]

There was much debate about the rum ration in the press during the war, with the Temperance Movement opposed to it. Numerous articles appeared advocating substitutes for rum– beef cubes, hot milk, hot soup etc. In November 1914, the National Temperance Federation protested against the rum ration urging the War Department to provide the troops with “a supply ofhot liquid food in the early morning instead of the cold deception of the rum ration”.[3]

Frequently, letters from serving soldiers would also appear in the press, as was the case with a letter from Sergeant Joseph Doust of the Royal Engineers pointing out that rum was issued sparingly and not when hot food was available. He went on:

“My advice to the [Women’s Total Abstinence] Union is to leave their easy homes where every comfort and convenience prevail, and to live, sleep and eat for weeks on and in slush and mud, without proper food for days at a time with all the senses benumbed by the cold striking to the very marrow of one’s bones and no hot food possible….”. [4]

Above: As can be seen Sgt Doust who wrote to the Women’s Total Abstinence Union was later commissioned

King George V had pledged not to consume any alcohol whilst hostilities persisted but nevertheless, he is quoted in the press in 1917 as saying “I know those trenches and can understand how the men in them appreciate their rum ration”.[5] 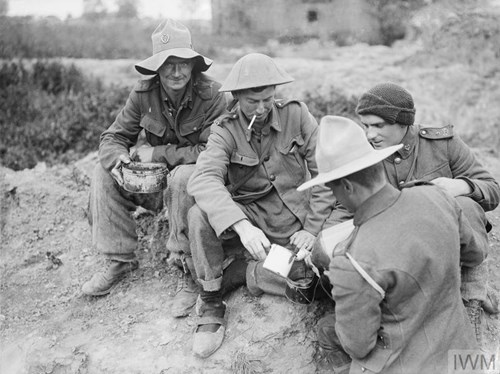 From the Canadians, M.A. Searle in the 18thBattalion was one of the infantrymen ordered to hold the dissolving ground at Passchendaele - he recounted: “Most of us carried on…because of not limitless but more than ordinary issues of rum”. Of the same time, Private G. Boyd of the 8th Battalion commented “if we had not had the rum we would have died”. [6]

For the French, it was wine that kept up morale, to the extent that French citizens were exhorted to: 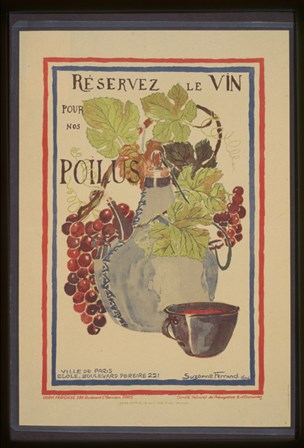 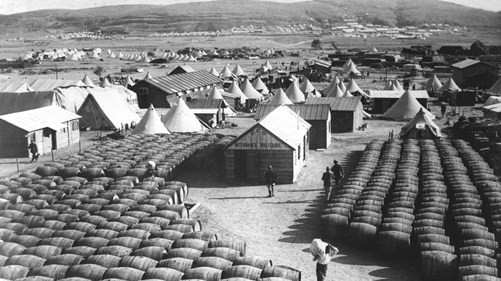 Above: wine rations for the troops. Photo – Everett historical

The wine allowance to a French soldier was initially a quarter litre per day – this increased during the war to half a litre. By 1916, it was almost three quarters of a litre. The importance of the wine ration for the French troops can be surmised from these two illustrations: 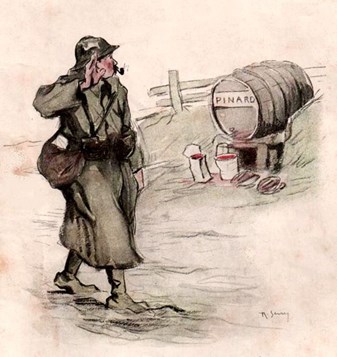 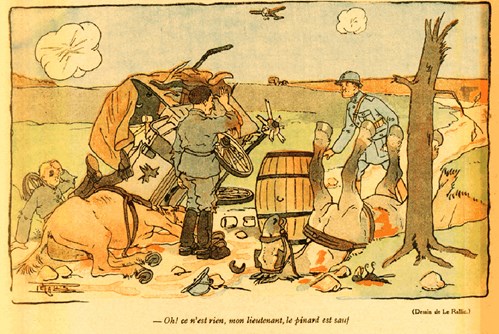 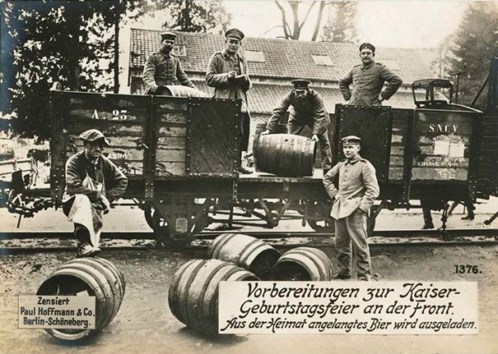 Above: ‘Preparations for the Kaiser’s birthday on the front’. Photo:thedrinksbusiness.com

German regimental beersteins from this period are highly collectible. 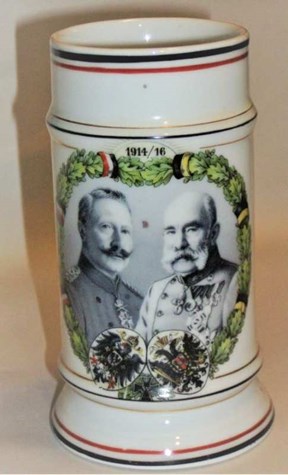 Above: A German regimental beerstein.

[1]The rum ration was not abolished in the Navy until 1970 – the day of its abolition was known as ‘Black Tot Day.