The following article by Craig Suddick takes an overview of the pension system immediately after the First World War:

With the release of The Western Front Pension Records to Ancestry, the record set has generated a large amount of research potential, the preliminary works for this research being undertaken by David Tattersfield on The Western Front Association website. How and why these records were created is a question which we will attempt to address however in order to do so it requires a look into the general background of the pension system. 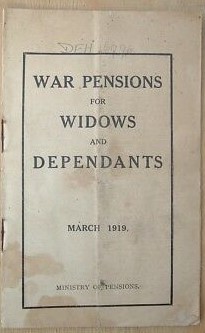 How was the pension system was arranged?

There were numerous local offices at which pension staff were based across the country however the majority of the work took place at several designated centres. At the beginning of 1916, there were four key departments dealing with pension administration, these were The War Office, The Chelsea Commissioners, The Army Pensions Issue Department and the Statutory Committee for supplementary pensions. In addition, the Local Pension Committee assisted men in dealing with queries and submitting pension claims for missed claims or changes in circumstances.

In November 1916 the majority of this work, with the exception of Army Service Pensions, Naval Pensions and Separation Allowances, was proposed for merger under a single controlling board which would oversee the work of the hundreds of Local Pension Committees. In February 1917 the Minister of Pensions took control of all disability, widows and dependent pensions from the War Office, Chelsea Commissioners and the Admiralty. Chelsea would henceforth deal with disabled soldiers. 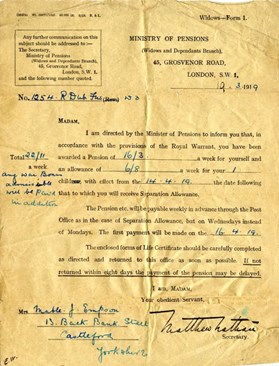 Above: A communication originating from Grosvenor Road, London

For pension award purposes the work was divided into four divisions (presumably the four aforementioned divisions formed in 1917). Each of these divisions was divided into five sub-groups. Each sub-group was divided into several sections. Within each section, a female clerk was allocated a group of about 200 claims to administer. The clerk undertook full management of the claims and was responsible for spotting errors or omissions and ensuring that they were corrected as soon as possible.

By early 1919 it was decided that the work of the Ministry of Pensions would be better served if the work could be taken out and processed on a local level - work in London alone was spread across 33 different office sites. It was initially announced that the new Pension Award Offices would be split across thirteen administrative regions alongside various other ancillary functions however it was later stated that it may be reduced to eleven areas (It would appear eleven regions was the final decision). 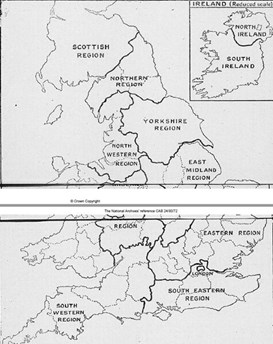 Each of these new regional offices would have five sub-departments - Awards, Medical Services, Local Committees, Audit/Finance and Registrars. These offices would be run with a staff of 300 to 400. These new offices would not, however, deal with the actual issuing of pensions, this work remained with the Pension Issue Office in London.

Initial pension work appears to have started to move into the control of the new regional offices at some point from late 1919/ early 1920. The exact date is unknown but the particular issues it caused were addressed in Parliament. The initial offices were, like the London sites they replaced, often spread across various repurposed buildings. The first dedicated regional office site to be set up was at Pilton, Edinburgh to which work was transferred for its surrounding offices in batches from November 1921 onwards.

How was a pension claim made?

The complexity of the system was criticised in February 1921 by the MP, J M Hogge. He described how a man who was discharged from the military was relatively well served if he declared a disability as he would be assessed, and the process put in place quite quickly at discharge. If the man, however, claimed a pension after discharge he had to make a claim under Article 9 of the Royal Warrant by completing five individual forms. These forms were then forwarded by the local pension committee, within 4 weeks, to arrange a medical review. At the same time, medical records were requested from the Army Record Office. The medical assessment was completed and referred to the relevant Pension Awards Office who could then calculate the pension, reducing it if they saw fit. The man was the notified of the award and informed that any future communication should be made via the Pension Issue Office in London.

The Pension Issue Office sent the man further notice of the award and included a further form, a life certificate, for completion. This form was then sent back to the Pension Issue Office so that a payment book could then be released to the local Post Office. A further letter was then sent to the man, to be presented at the Post Office, to prove his identity. This whole process had to be undertaken every 13 weeks.

How the surviving records are arranged

Basic pension details were retained on ledger cards and a separate corresponding card index was kept however, the majority of the actual pension calculations and correspondence details have not survived.

Can we determine when the surviving records were created?

It is clear that the surviving records do not cover the entire span of the WW1 pensions nor do they cover all of the records from the regional offices (although this is apparently due to weeding). The question is when and where were the records created?

Each of the surviving records is pre-stamped with a region number, pension type code and an individual record number (for example, 2/APD/175). This system of numbering is generally consistent throughout the various regions and pension types, which indicates that some form of standard organisation was used.

By using contemporary records, we can determine that Region 8, South West (founded in September 1919), seems to have been opened for the processing of pension claims in very early 1920 and based out of the Clifton Hotel. This gives us a starting point and we can then look at pension records to see how they reflect this.

8/MA/40 – Pension commended in February 1918 following discharge. The first administrative comment added to the ledger shows files were requested from London on 31 December 1919. The pension calculations on the rear of the ledger show the award was rejected 11 February 1920. 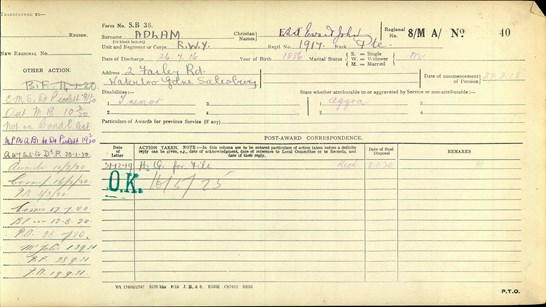 8/MA/46 – Pension commended in February 1919 following discharge. The first administrative comments added to the ledger were erased however the pension calculations on the rear of the card show entries from 22 January 1920. 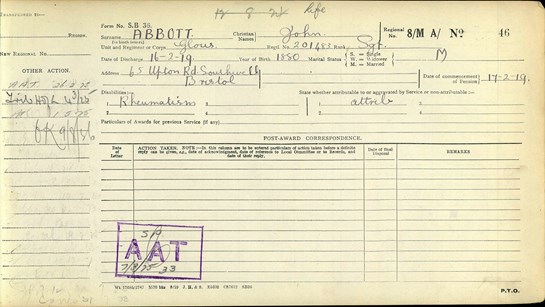 8/MA/70 – Pension commended in May 1919 following discharge. The first administrative comment added to the ledger was dated February 1920. The pension calculations on the rear of the ledger show entries from 22 January 1920. 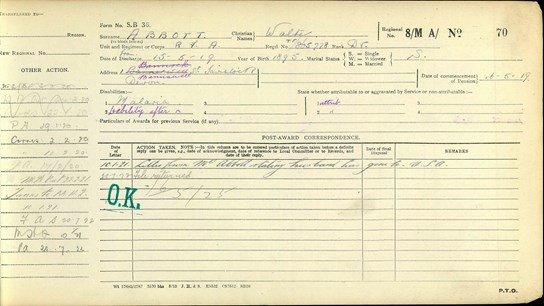 We can undertake the same exercise by looking at Region 2, Northern. This also seems to have been opened in very early 1920 and based out of a Hotel. This gives us a starting point and we can then look at pension records to see how they reflect this. 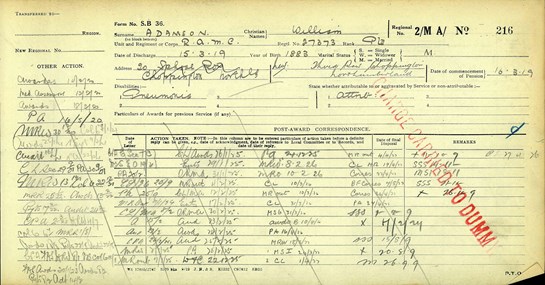 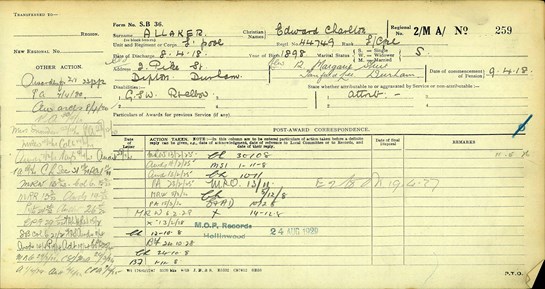 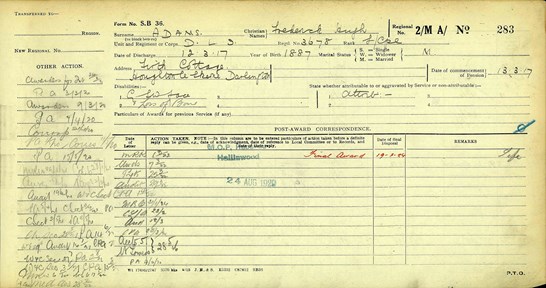 2/MX/121 – Pension commended in May 1918 following discharge. The first administrative comment added to the ledger shows that the man was reboarded for medical assessment in March 1920. The pension calculations on the rear of the ledger show the award was made on 18 May 1920 and paid from 26 May 1920. 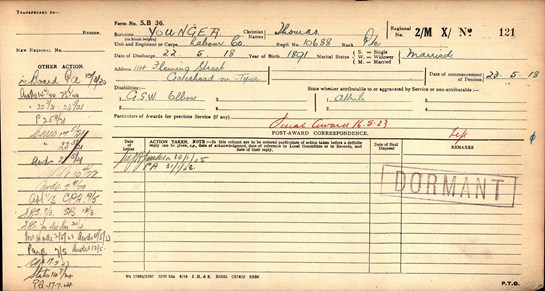 The above records for the Northern and South West regions suggest that pensions for the men in question were already in place but details of those earlier pensions are not shown on the surviving ledgers. This would suggest that the surviving records were created upon the opening of a fresh record card after the files were transferred to the regional offices. The annotations on ledger 8/MA/40 suggests that case details were still being requested from London as required – presumably, case files not at regional offices were still being held there.

Although a huge number of records have been saved by The Western Front Association it, unfortunately, appears that there is an almost complete the loss of records and files used prior to the creation of the regional offices.

It is, of course, no surprise to see that the pension cards and ledgers were a work in action and that they were updated well into the 1930s and beyond in many cases. Once functions had been re-centralised the ledgers were retained in use rather than new records being created.