William Arthur Brewer was born in Chippenham, Wiltshire and was the son of George and Sarah Brewer of 81, Wood Lane, Chippenham. William had worked as a woollen cloth weaver and served in the Territorial Army for three years. On 1 September 1914, a week after the outbreak of the First World War, he re-enlisted in the Wiltshire Regiment in Devizes as a private. By the end of October 1914, he was in action and was later killed in on the 13 November 1914 at Hooge aged 21.  He is commemorated on the Ypres (Menin Gate) Memorial.

William ‘Billy’ Brewer was exceedingly well known in Wiltshire footballing circles. He played as a centre forward and was a prolific goal scorer and Captain of Chippenham Town F.C. before signing for Swindon Town in 1913 where he played mainly in the Reserve team. Brewer made 2 first team appearances in the Swindon Southern League Championship winning team of 1913-14. Swindon allowed him to play some matches for Chippenham after the signing. His debut for Swindon was on 16 Oct 1913 when he scored the equalizer in a 1-1 draw with Fulham Reserves. He scored in his second match for Swindon Reserves, a 4-1 win against Watford Reserves before a crowd of 1500 in the South East Counties League. 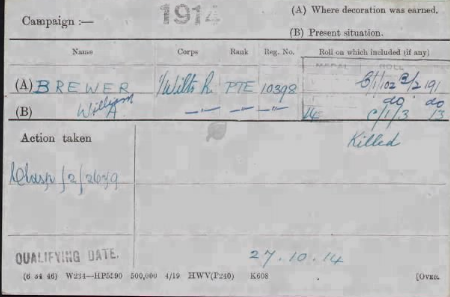 William was in the Swindon squad in 1913-14 which included the famous Harold Fleming. 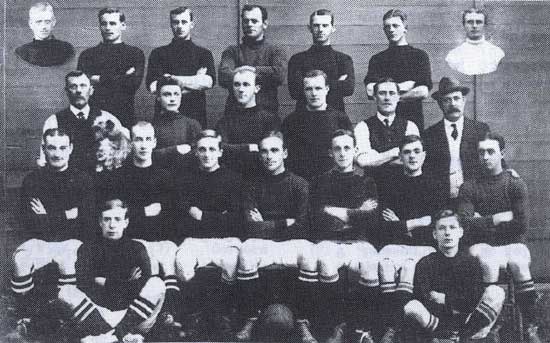 Harold Fleming is shown above, 3rd from the left on the front seated row

Harold, a Wiltshire lad played Inside forward and between 1907–1924 made 295 first team appearances for Swindon Town, scoring 182 goals. He was also capped 11 times for England between 1909–1914, scoring 9 goals. Harold became a Swindon Town legend and if not for World War I his career may have been more successful. During the conflict he worked as a physical education instructor.