On 22 November 1917, there occurred in Belgium the death of Private Luke Leadbeater. A single man, it would normally have been the case that few remember him after more than 100 years. This is not, however, the case. 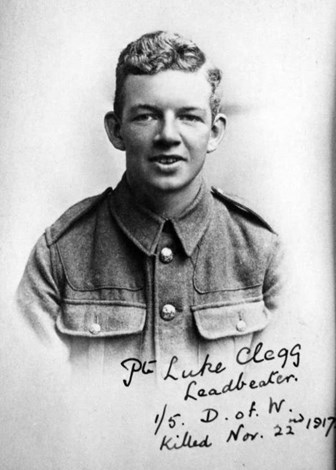 Luke was born in Newcastle-upon-Tyne in 1898. After his father (also called Luke) died, his mother (Sarah) remarried and became Mrs Rowbottom. In 1901 the family were living in Elswick which is a suburb of Newcastle. Sometime in the next few years the family moved to Ravensthorpe, near Dewsbury. (Sarah had been born in nearby Batley in 1865).

A member of Ravensthorpe United Methodist Church and Sunday School, at the outbreak of war Luke seems to have worked at Jas Smith and Sons (a dry-cleaning factory) until, on 14th February 1917, shortly after his 18th birthday, he joined the Duke of Wellington’s Regiment. After receiving the usual period of training he was posted to the 1/5th Battalion (part of the 49th (West Riding) Division on 11th October. However, less than six weeks after joining the battalion Luke was killed.

On 19 November 1917, the battalion moved up to the Broodseinde Ridge, north of Becelaere. The battalion’s War Diary describes the sight that met the battalion during the move to the front line:

“The enemy persistently shelled the whole area whilst the relief was going on. The whole of the country between Ypres and the new forward line was one mass of shell holes and when one looked back from the different ridges it is a marvel how ever the original front line was held for so long in front of Ypres and still more of a marvel how the ground was afterwards taken. Duckboard paths and plank roads were made across the mass of shell holes for the infantry, and there were separate tracks for mules.” 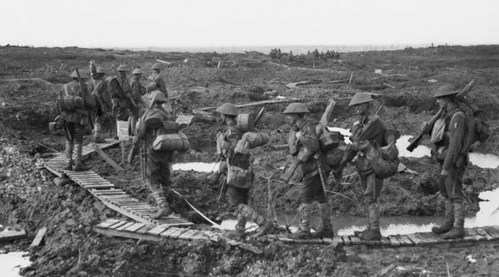 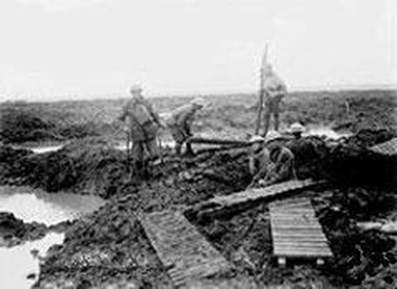 The diary entry for 22 November (the day Luke was killed) is brief, indicating heavy shelling by the Germans at intervals throughout the day.

Second Lieutenant R.B. Atkinson, wrote a letter to Sarah Rowbottom, Luke’s mother, but it was a letter from Lance Corporal Arthur Sheard to Luke’s fiancee that gave the details surrounding Luke’s death; it seems that Luke had been sheltering in a dug-out in the trenches on Thursday 22 November when a shell came over, killing Luke and another soldier and wounding a third.

Luke Clegg Leadbeater is buried in Aeroplane Cemetery; in the adjoining grave is Private John Wiseman who was the other soldier from the battalion to be killed on this day. 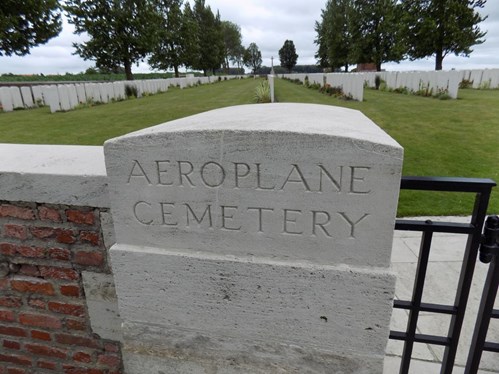 The reference to a letter to Luke’s fiancée is of interest as this was Jessie and she lived to an old age. 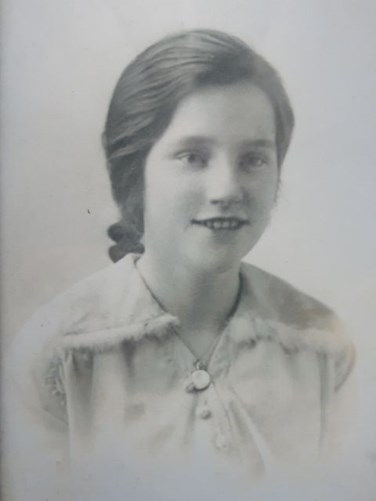 Above: Jessie as Luke would have known her.

Jessie, after the death of Luke, eventually married, but it seems the marriage was not good. The husband was apparently ‘not a nice man’. Jessie requested that when she died her ashes be scattered on the grave of her first love – Luke. In 2001 Jessie passed away and her wishes were carried out

There remains – besides the photograph below, courtesy of John Reed (via the Great War Forum) - a sketchbook that Luke made. 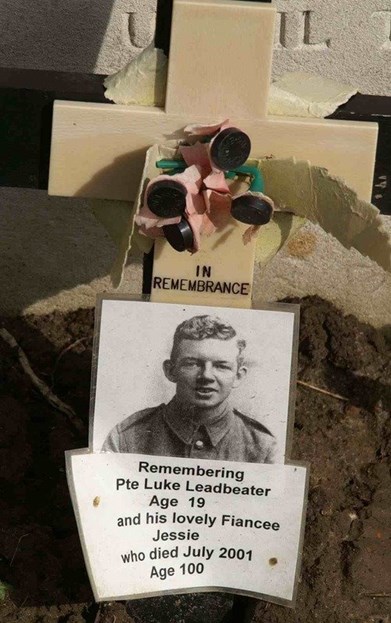 It seems Luke had a talent for drawing and attended Dewsbury School of Art where his works were featured in exhibitions and received merit awards.

There is a final twist in the story. Luke’s mother, Sarah, died around the same time as Luke. The exact date has yet to be determined, and her husband (Luke's stepfather) for reasons we can't establish refused to complete a form that may have entitled him to a war pension 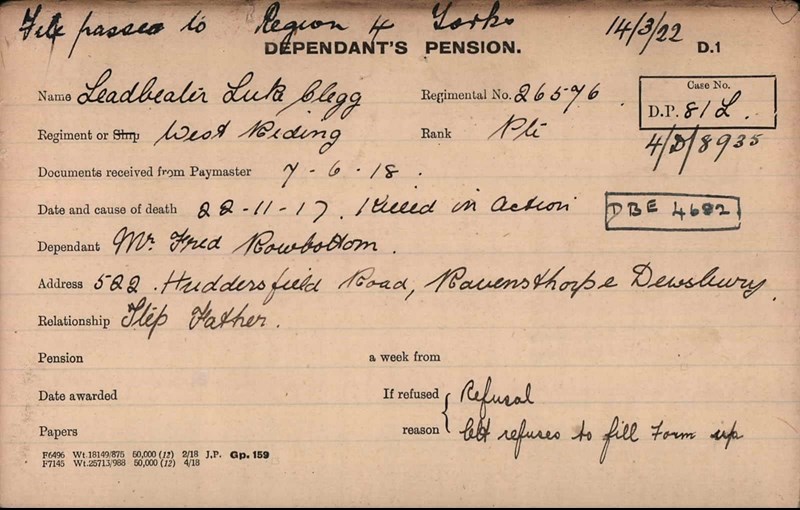 The mother of John Wiseman (the soldier who was killed alongside Luke and who is buried in the adjoining grave) received a weekly pension of 8 shillings. 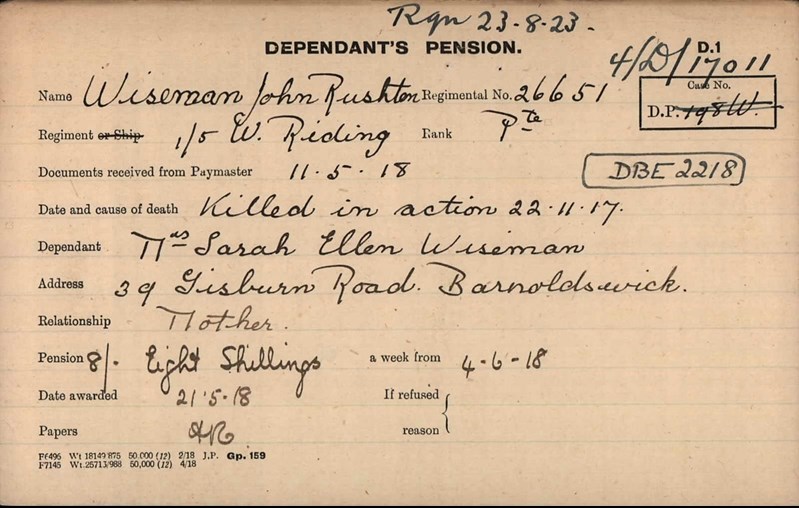 Below: sketches from Luke's prewar work and also images he drew during his time in training are shown courtesy of Dewsbury Sacrifices (http://www.dewsburysacrifices.org/luke-clegg-leadbeater-collection/drawings/) 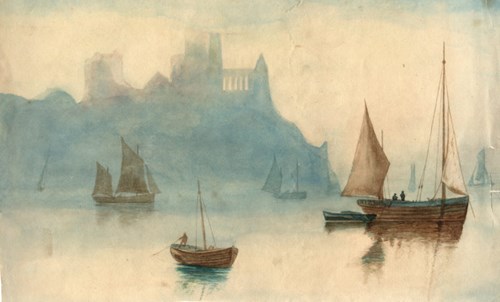 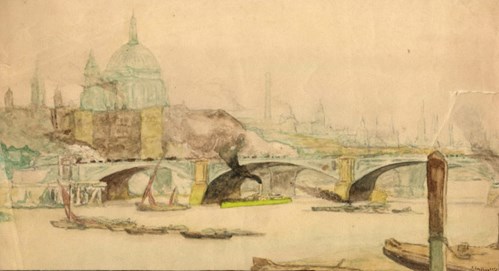 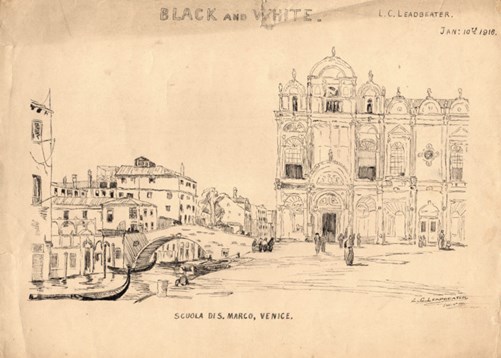 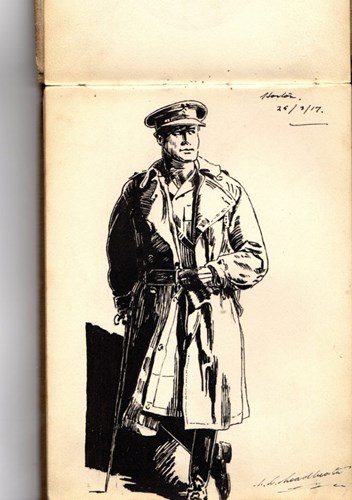 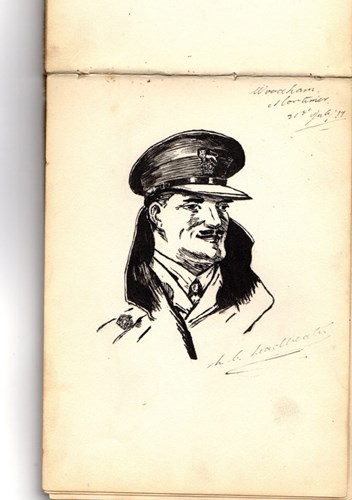 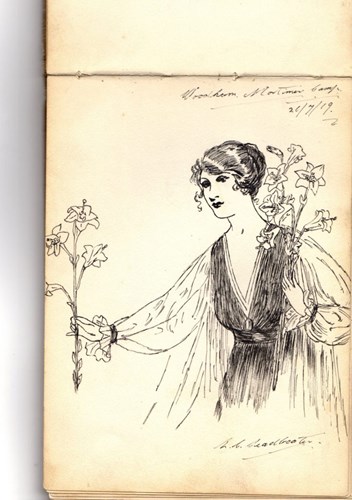