Oddities in the Pension Records

Within the Pension Records that The Western Front Association have saved are hundreds of thousands of cards for pension claims for soldiers who lost their lives during the Great War. Some cards, however, are notable for a variety of reasons.

First of all - the card below - this clearly states the soldier was 'kia' in the Boer War. But his card is among those the WFA saved. There are other cards that have been spotted for soldiers who served in the Boer War, but if this card is taken at face value it does seem to be for a soldier who was killed in the earlier conflict. 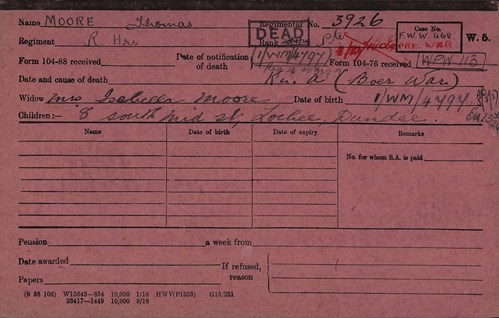 If there are any Boer War experts reading this, and you have information about Thomas Moore, 3926 of the Royal Highlanders (Black Watch) please get in touch.

Many members will be familiar with the Spielberg film 'Saving Private Ryan' which is based on the true story of the four Niland brothers who served in the US Army in the Second World War. Is there a First World War equivalent? Using the WFA's pension records numerous examples of siblings who were killed have been found.

Below is the example of the four Bailey brothers. Ernest, Percy, Robert and George all served in the Norfolk Regiment, Ernest, Robert and George were all killed in July 1916 (George and Ernest are commemorated on the Thiepval Memorial, Robert is buried at Dantzig Alley British Cemetery).

Percy survived, but was not destined to survive long, his date of death being recorded as December 1921. 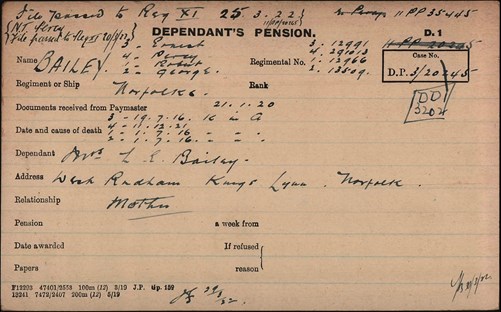 Tragic as the Bailey case is, there is another example which details the five Souls brothers.[1] 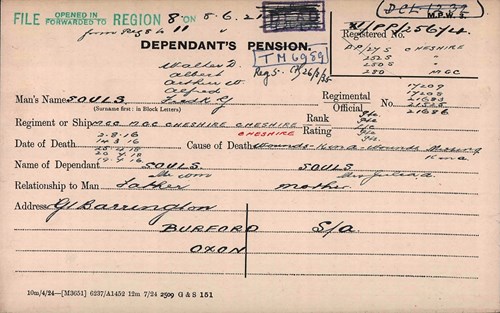 Frederick, aged 30, was killed on 19 July 1916. He served in the Cheshire Regiment and is commemorated on the Thiepval Memorial to the Missing.

Two weeks later Walter (aged 24) was to die of his wounds on 2 August 1916. Like Albert he was in the MGC, with the subsequent regimental number - 17209). He is buried at St Sever Cemetery, Rouen.

Just five days later, Arthur Souls (21683, attached to the Queen's Own (Royal West Kent) Regiment) was also to be killed - also aged 31. He is buried at Hangard Communal Cemetery.

If members come across other cases of multiple brothers being named on the Pension Cards, please do look into these and feel free to submit a piece which we may be able to publish.

As is known, the WFA saved the cards from destruction some years ago. In the period since they were created they have probably been stored in some less than perfect places however, by and large the cards are in perfect condition. There are a few exceptions that have been found, which have been damaged. The scanning of these was obviously a massive and delicate operation, so it may be worth sharing some of these damaged cards - being the exceptions to those that are seen 99.9% of the time. 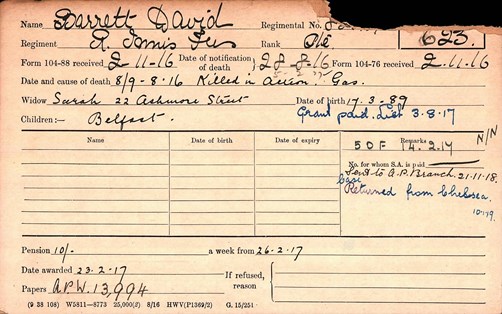 The above card for David Barrett is damaged where the regimental number is detailed. Nevertheless, this was easy to identify as being 8244 and has been added to the Fold3 indexing to ensure this can be located by the 'missing' regimental number. 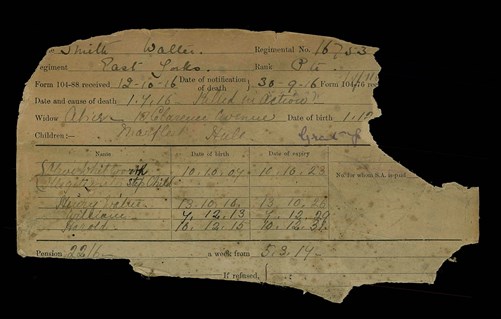 The card for Walter Smith (16753) is in a very bad state, but remains readable and provides useful information as to the soldier's wife and children and his home address. 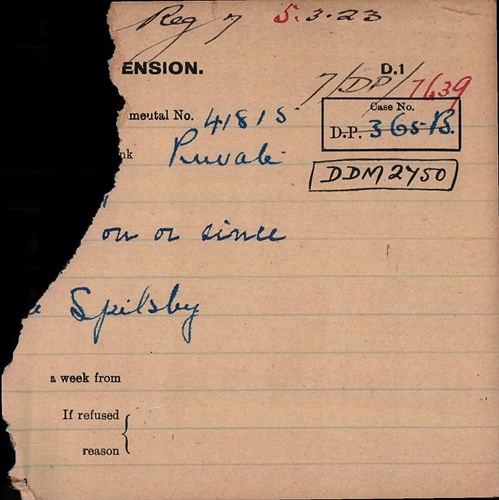 Perhaps the most extreme example of a card that has not survived well over the last 100 years is that shown above. The soldier in question was Major (that was his name, not his rank) Barratt of the Northamptonshire Regiment.

Some cards are in pristine condition but the handwriting defies interpretation. Who is the RAF serviceman below - at first glance we may be seeing his name as Batling (the Ancestry interpretation) but it could also be Bawling. The interpretation of the handwriting on the cards has been possibly the most serious hurdle to the indexing process that Ancestry have faced. 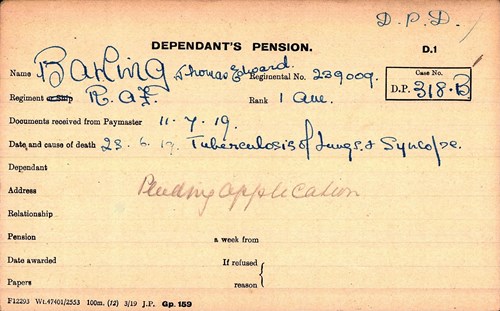 The tagging of the cards with the correct name is obviously hindered by 'bad' handwriting, but in some cases, the Ministry of Pensions Clerks seem to have got it wrong. 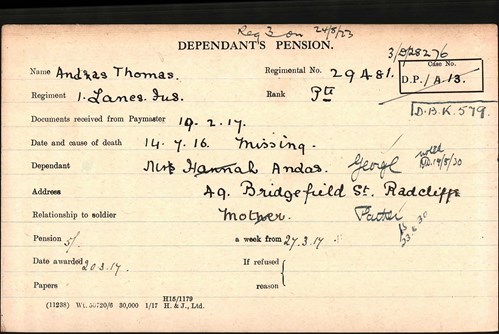 The above named soldier has had his surname corrected from Thomas Andras to Thomas Andas. His name is actually Thomas Audas which is confirmed by the photograph below from the Bury Archives. 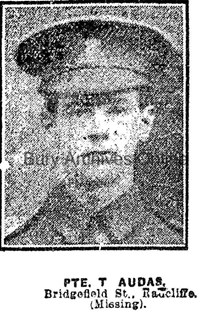