The following article, by Craig Suddick, looks at a fairly uncommon scenario - being the pension claim for a deceased serviceman coming from two different sources, in two different regions. The issue, identified by the Ministry of Pensions potentially arose due to pension claims being administered regionally. Because of this regional administration, it sometimes was the case that that duplicate or multiple claims were made from different (rival) claimants into different regional centres. This 'conflict' needed therefore to be adjudicated centrally...

A close observation of some of the WFA pension cards will display a reference number different to that typically seen – this reference will begin with PR and be, usually, written in green in - along with a message regarding the case being passed to the Headquarters branch.

This note indicates that due to multiple, ‘plural’, regions being involved in the claim the pension files were to be passed back to the Headquarters section in London to be dealt with. This was seemingly so that all of the relevant files could be dealt with centrally rather than being spread across multiple regions.

In this article, we will look at a couple of examples that can be found within the records held by The Western Front Association – that of Charles Bennett and Charles Brown (alias Neale).

A (complicated) example of plurality can be seen on a pension card for Charles Bennett - notice the, on the top-right, the code PR403 and the green note 'Plural Regions - File passed to Headquarter Section 31 3 1921'. 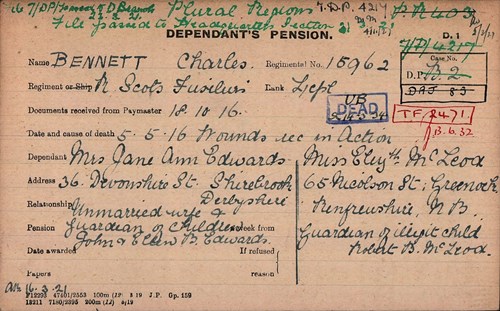 A close-up of this is shown below.

In the case of Charles Bennett, he had two separate parties who had made a claim for dependency from him – Mrs Jane Ann Edwards and Miss Elizabeth McLeod.

The first of these, Jane Ann Edwards, is listed as the ‘unmarried wife’ and guardian to two children, John and Ellen B Edwards. It would appear that he was living with Mrs Edwards prior to his death; his soldiers will leaving all his effects to her.

It is unclear who Mrs McLeod was in relation to Charles Bennett, she was not his mother.  As well as claiming dependency from Charles, she was apparently the guardian of an illegitimate child, Robert B McLeod.  She herself had a dependency claim in respect of #442627 Robert B McLeod, killed on 23 May 1918. Robert is noted on the pension ledger as her son. See image below. 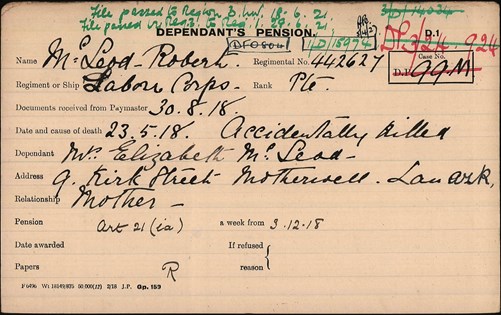 The card for Charles Brown again shows the PR reference, PR477, and the green note stating that the claim had been passed to the Headquarters branch. 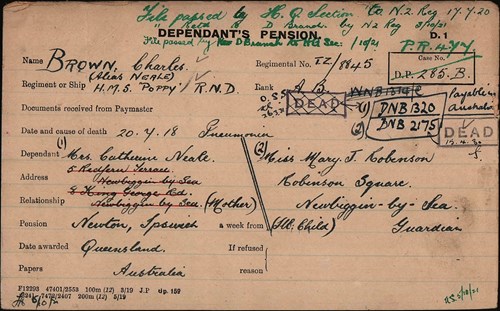 In respect of Brown, two separate parties had lodged a dependent claim, his mother Catherine and the guardian of his illegitimate child, Miss Mary J Robinson. His wife, Mrs Margaret Neale, also claimed as a widow. 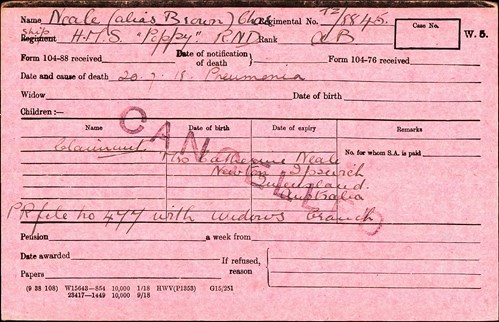 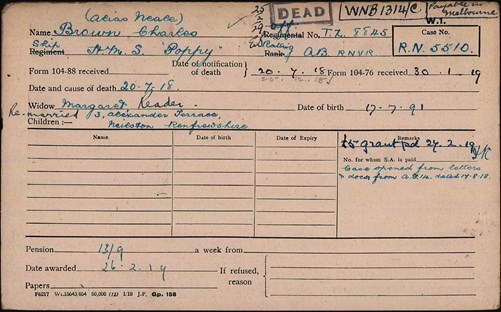 In this particular case the situation, as outlined in the National Archive PIN26 pension files, shows that the claim was further complicated by the initial allotment of Separation Allowance being made to the mother and then when his wife tried to claim it, her request for the Separation Allowance being declined. Unusually, this claim can be reviewed in full and the files are available via THIS LINK,

It is again clear that administration of the War Pensions was not an easy task when there were multiple claims against one person and the Ministry of pensions had to tread carefully in how they proceeded.

Clearly in both of these cases, difficult decisions had to be made for claims from rival sources. There will be numerous other examples of these within the WFA's Pension Records.

I hope this article helps members to identify such cases.