In an earlier article we looked at some cases of Pension records and compared the WFA's pension cards to files that are retained in The National Archives in the 'PIN26' class.

This is the second of three articles that will look to examine these records, and enable researchers to compare the files to the WFA's records.

The first case to be examined in this article is that of Joe Bridgewood.

Joe was an infantryman with the King's (Liverpool) Regiment. His regimental number was 44918. He applied for a pension (neurasthenia and deafness) and this commenced in March 1917. The pension was referenced 6/MB/1076 . He also applied for an Alternative Pension (this was given a reference 6/APD/212). Both of these claims can be found using the WFA's pension records. 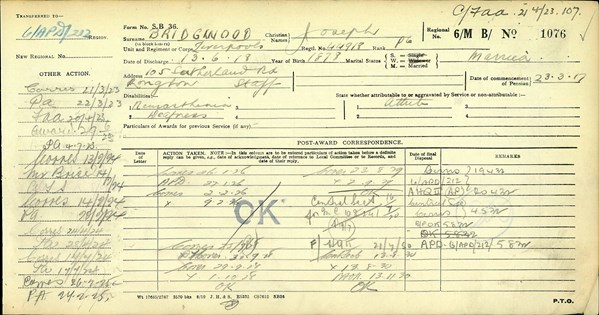 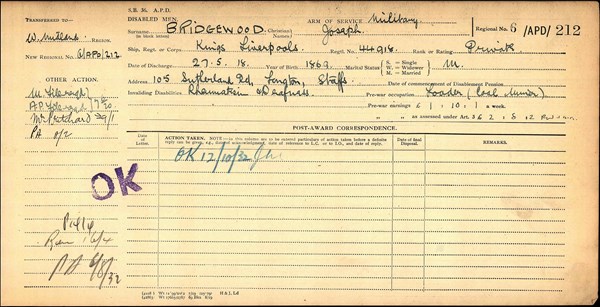 What is not available, unless you go to The National Archive is the full file, this runs to nearly 180 digital images. These are available via the reference PIN26/19955.

Digital photos of these pages can be viewed on THIS LINK.

Arthur was killed in action on 8 November 1917. He was serving in the Warwickshire Yeomanry. He is buried at Gaza War Cemetery.

There is a pension card for him (his widow claimed a pension) but on this occasion no ledger has been located. 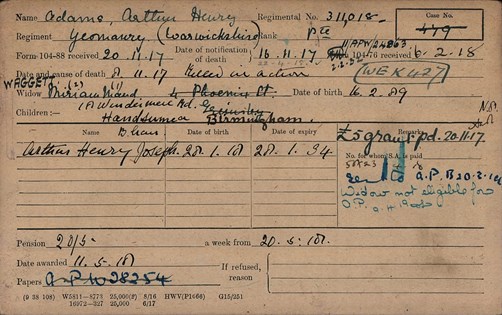 Officers Pension cards that have been saved by the WFA are now available. Whilst some of these cards for officers show limited information and don't give much detail (such is the case with the example shown below). However some interesting information can still be obtained from many of these records. 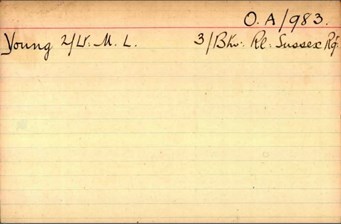 There are, however, some officers records are contained within the PIN 26 records at TNA. One of these is is 2/Lt Maurice Young who survived the war. His pension claim is detailed in PIN 26/22756

Colin was a member of the Mercantile Marine, as reflected in the pension card for him here 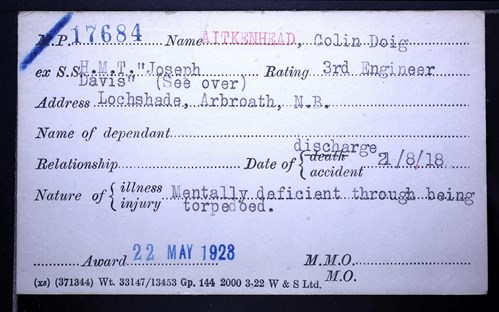 The reverse of this card, which can be seen via the WFA's 'Library Edition' of Fold3 confirms the other ships he served on, being HMT 'Westbury' and HMT 'Charity'.

He survived the war but was discharged due to being 'mentally deficient' following a torpedo attack on his ship. His pension claim is detailed at TNA in file PIN 26/19721

Digital photos of these pages can be viewed on THIS LINK. Image number 1060156 which can be seen via the link, confirms the vessels (together with a fourth ship) on which Colin served.

The last file to be detailed in this article is that of Thomas Hare who survived the war. The WFA have preserved two ledgers 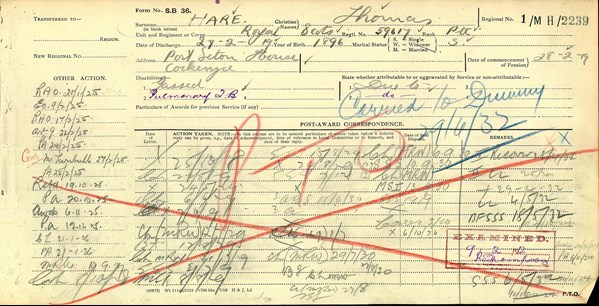 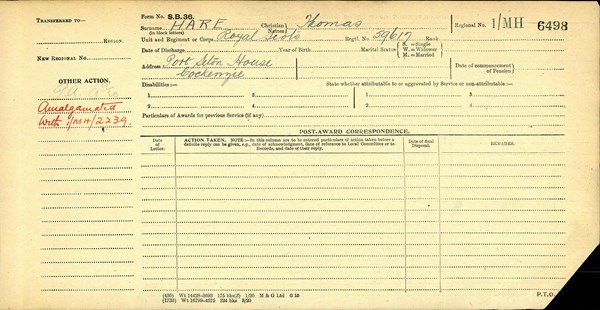 There are well over 150 documents in this file, which can be seen by clicking THIS LINK.

A third and final article detailing similar cases has been published and can be seen here.