The ‘Battle' of May Island

This was neither a ‘battle’ nor an engagement of any kind with the enemy….but nonetheless, it left over a hundred families grieving the loss of a loved one in a series of mishaps – yet another tragic chapter in the short history of the ill-fated K Class submarines. 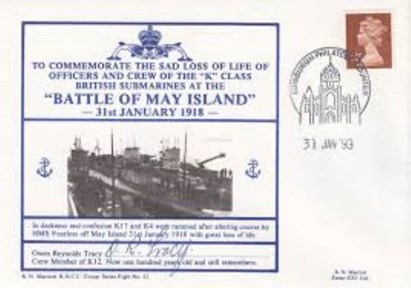 Above a Royal Mail commemorative cover (dated 31 January 1993 - being the 75th Anniversary of the disaster).

The K Class of submarines, later known as ‘Kalamity Class’ or ‘Katastrophe Class’, were conceived in 1915 to provide submarines that could accompany the Grand Fleet at speeds of up to 24 knots. But this speed came at a price – only steam turbines could provide the required rate of surface knots. Submerged, they used electric batteries and an emergency diesel. But this propulsion system gave the K Class a bulk and weight that made steering difficult. The steam turbine system also required vents and two funnels – the only submarine ever to be so equipped. As one critic put it, the K Class boats had ‘too many holes’. Unsurprisingly, they were slow to dive – with German U-boats able to dive five times quicker than the K Class boats, with the classic quote being’ I say, Number 1 – my end is diving. What’s your end up to?’ 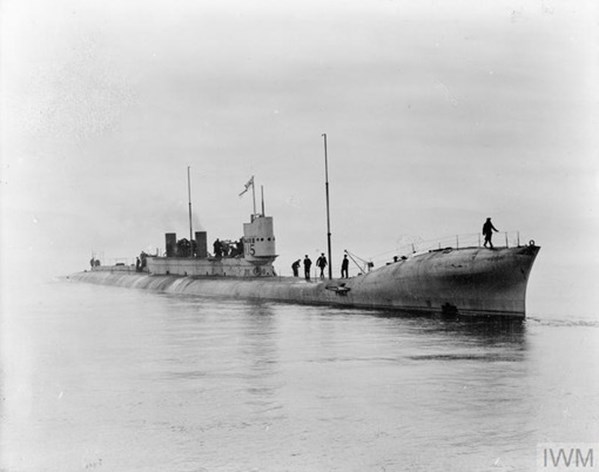 Above: K22 lowering her funnels

Their nickname arose from the numerous accidents in which they were involved – and the fate of K4, K14 and K22 off May Island in the Firth of Forth on 31 January 1918 was yet another example of the type of incident that earned them this reputation. 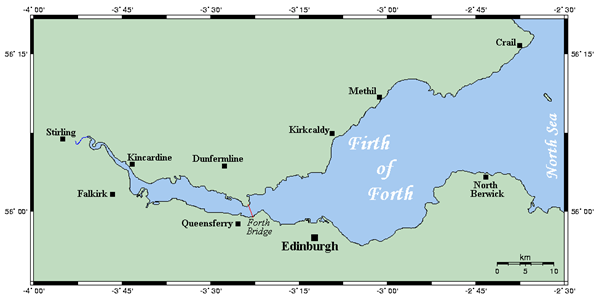 Above: The location of May Island is shown at the right hand edge of the map

Prior to 1918, there had been a number of incidents involving K class submarines.

K13 sank in January 1917 during sea trials when an intake failed to close whilst diving and her engine room flooded. She was eventually salvaged and recommissioned as K22 in March 1917. 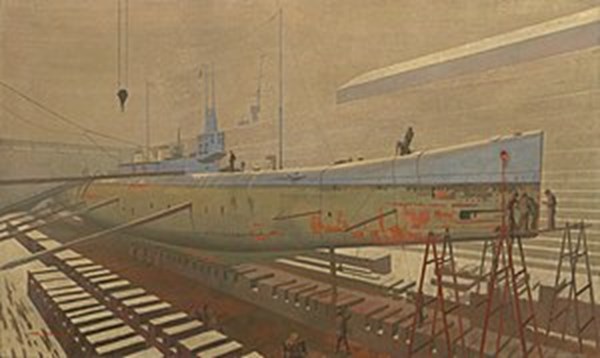 K4 ran aground on Walney Island in January 1917 and remained stranded there for some time. 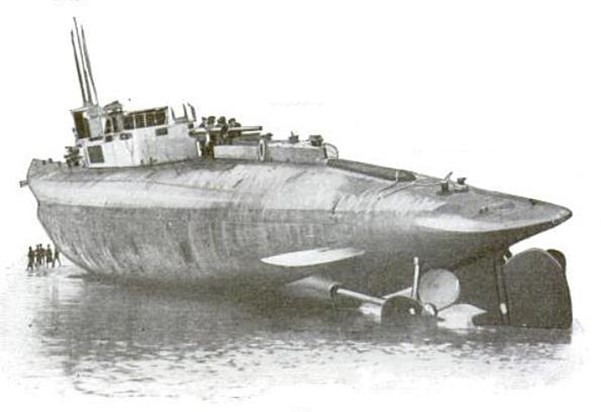 K1 collided with K4 off the Danish coast on 18 November 1917 and was scuttled to avoid capture.

Conditions aboard the K Class boats were also relatively poor, with cramped and poorly ventilated accommodation for the crew, high temperatures and oppressive humidity. Both their record and living conditions made them unpopular boats to serve, with morale a recurring problem.

In December 1917, Vice Admiral Beatty moved the 12th and 13th flotilla of K Class submarines from Scapa Flow to Rosyth, in the Firth of Forth. He devised the Operation EC1 to exercise his cruiser squadrons and practice deployments. The exercise envisaged a rendezvous of the Grand Fleet in the North Sea, before heading north to Scapa Flow. Two flotillas of K Class submarines were to take part – the 12th Flotilla comprising K3, K4, K6 and K7 and the 13th Flotilla comprising K11, K12, K14, K17 and K22. 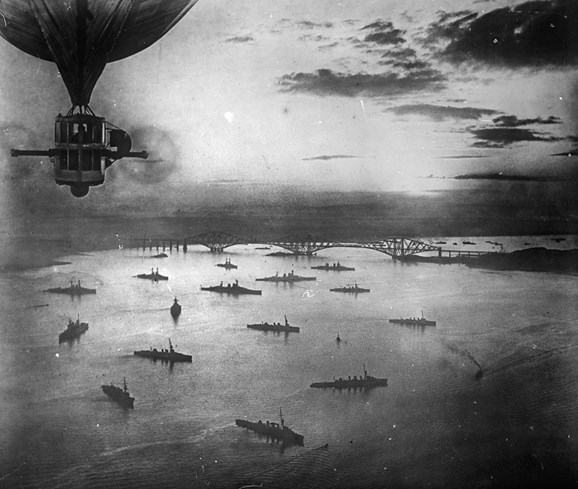 Above: The Grand Fleet in The Firth of Forth

The operation began at 6.30pm on 31 January 1918 with HMS Courageous, then HMS Ithuriel leading the force out of Rosyth, with Captain Lear in Ithurielleading the 13th Flotilla K boats. The 12th Flotilla would join HMS Australia, HMS New Zealand, HMS Indomitable and HMS Inflexible who were some five miles behind the 13th Flotilla. In all, a line of some 40 ships sailed down the Firth of Forth.

Incredibly, eight armed trawlers were in the area sweeping for mines – although they were unaware that the fleet would be passing by. Just as the 13th Flotilla was passing the Island of May, two of the minesweepers appeared out of the mist, veering in front of K14 which caused the Commander, Thomas Harbottle, to change course suddenly. K14 avoided the minesweepers but was then rammed by K22.

The first collision left both K14 and K22 in an extremely vulnerable position – K22 had two forward compartments flooded and K14 was liable to sink at any moment. Despite the boats signalling on their radios and Aldis lamps, with men stationed on the bridges firing flares to warn other ships, 25 minutes after the initial collision HMS Inflexible ploughed into the stricken K22. Miraculously, K22 was still watertightand K14 was still afloat when Ithuriel turned back to rescue the men on the two stricken boats some 18 miles from May Island. The Ithuriel had to make a number of evasive moves and change course several times to dodge the battle cruisers heading down the Firth, followed by the remaining boats of the 13th Flotilla – K11, K12 and K17.

The second group of K-boats – the 12th Flotilla – were now approaching May Island following HMS Fearless and other battle cruisers heading down the Firth. At 8.32pm, Fearless slammed into K17 which sank within minutes, although the crew managed to escape into the water. K7 was by this time assisting in the rescue of some of the men from K17 but worse was to come as the escorting destroyers to Fearless swept over the spot where K17 had gone down, killing many of the men in the water. 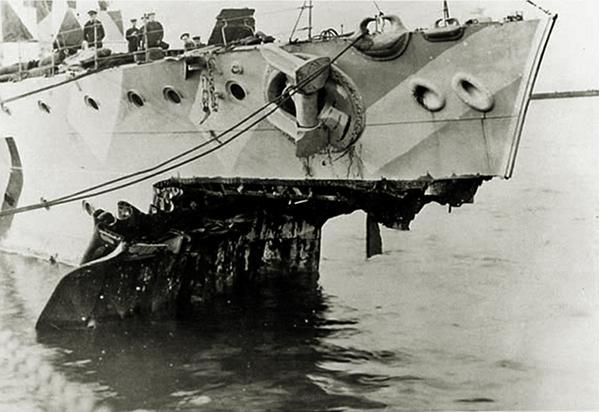 Above: HMS Fearless after collision with K17 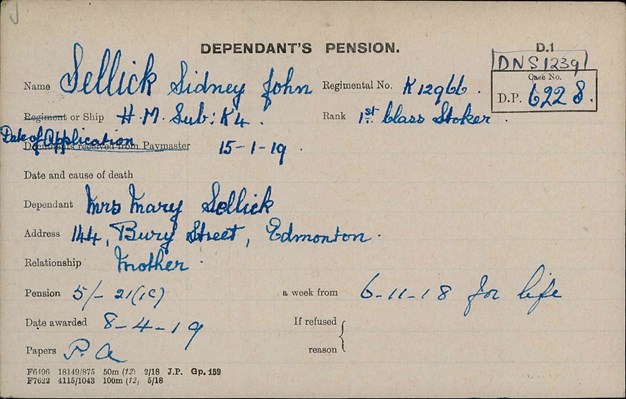 Above: The Pension Record Card of Sydney John Sellick 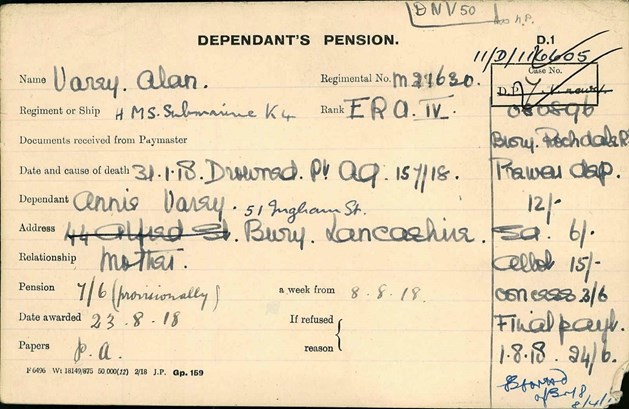 Above: The Pension Record Card of Alan Varey 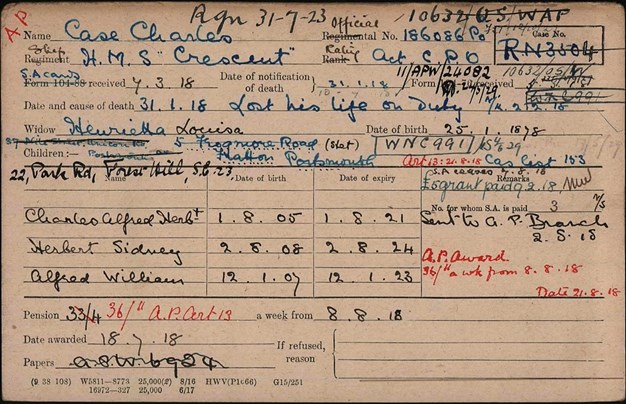 Above: The Pension Record Card of Charles Chase 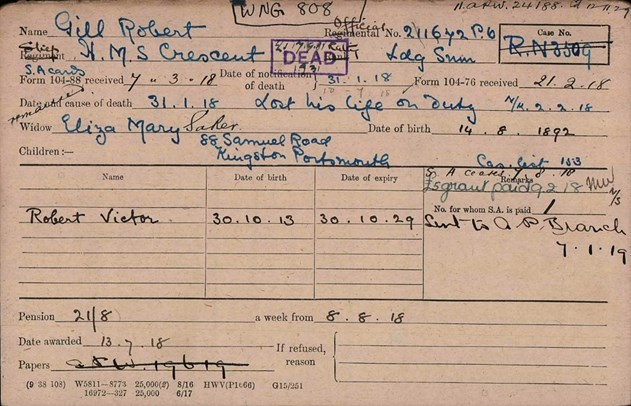 Above: The Pension Record Card of Robert Hill (HMS Crescent was the depot ship for the submarines)

The circumstances of the losses were hushed up at the time, although a Court of Inquiry took place in February 1918 which placed the blame on five K boat officers, one of whom was later court martialled, although the charge was ‘not proved’. The investigation and the court martial were kept quiet with information not released until many years later in the 1990’s.

By this time, the death toll aboard all K Class submarines had risen to 270 men – with only one torpedo fired at the enemy (and it failed to explode). The K Class boats were decommissioned thereafter, with K18, K19, K20 and K21 extensively modified and re-designated as M Class submarines.

A memorial cairn was erected in 2002 at Anstruther harbour opposite May Island. 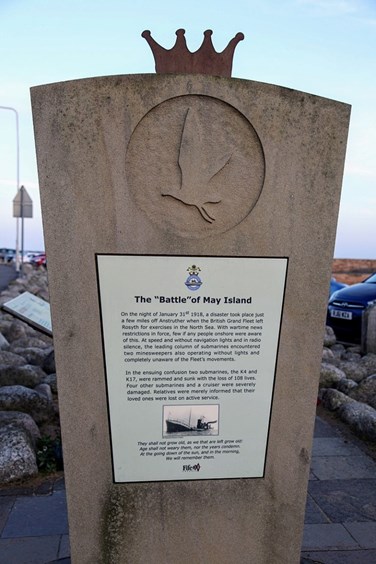 Above: The memorial cairn at Anstruther harbour