The Real Birdsong: The Kilian Tunnel

In the BBC adaptation of Sebastian Faulks' ‘Birdsong' we have seen how the character Stephen Wraysford escaped in a somewhat surprising way from a tunnel. In reality, the risk of permanent entrapment was far more likely than escape, as vividly shown by a recent discovery at the very southern end of the Western Front.

In October 2010, construction of a bypass near the town of Altkirch (a commune in the Haut-Rhin department in Alsace) was halted by the discovery of tunnel; within the tunnel were found the remains of twenty one German soldiers, who were killed in March 1918.

(Editor's note: Below you can view two photo slideshows of the excavations and some of the objects found (soldiers' remains excluded).

The small town of Altkirch lies southwest of Mulhouse and just twelve miles from the junction of the French/German/Swiss border. After the initial German advance in this area in 1914, when Altkirch was taken by the Germans, the front line did not move in the subsequent four years, and the trench lines stabilised just west of the town. The front line was in the vicinity of the villages of Aspach and Carspach and the second line went through Altkirch.  The German trenches were dug by the 110th and 119th Infantry Regiments from 20 September 1914 onwards. It was not until February 1916 that fighting in the area intensified.

It was around this time that German engineer units started work on a tunnel system designed to hold up to 500 men. This front line tunnel system, called the Kilianstollen (Kilian tunnel) was over 400 feet in length and 20 feet below the surface and was constructed on the hillside of the Lerchenberg. A number of exits were constructed - those to the west gave access to the front line trenches. With the usual German thoroughness, the gallery was heated by wood stoves, supplied with electricity, and telephone lines were installed. Beds, benches, tables, chairs, cabinets and shelves were also provided. 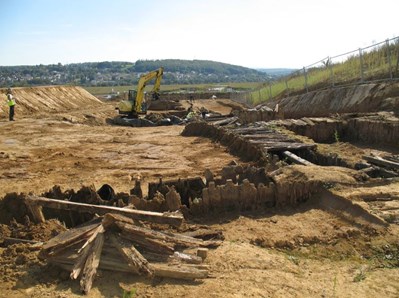 The German 94th Infantry Regiment arrived at the front just over a year later in April 1917, and assigned to the area known as South Altkirch. Part of the 22nd Reserve Division, the regiment fought in the opening campaigns against BEF including the Battle of Mons. After The First Battle of the Marne, the division held the line between the Aisne and the Oise until the Autumn of 1915, when it went to the Champagne region. In 1916, it fought in the Battle of Verdun and also saw action in the later phases of the Battle of the Somme.

Altkirch was a quiet sector, there was some patrolling by the Regiment, but this may have been suspended in the winter of 1917. The 94th Reserve Infantry Regiment was temporarily relieved from 13 January to 17 February 1918, but came back to the sector after their month out of the line. During this time the weather had become warmer and a thaw had set it. This had resulted in some damage to the trenches.

German artillery commenced a three hour bombardment of the French trenches at 6am on 18 March using mustard gas. Inevitably retaliation from French artillery followed and from around midday, for six hours the German lines were bombarded, much of the fire was concentrated on the trenches (designated "C2") near the Kilian tunnel. Realising that they had to take shelter, the occupants of the trench, from the 6th Company of the regiment took refuge in the Kilian tunnel, believing this would ensure their safety (it had, after all sixteen exits and was thought to be sufficiently deep). They were sadly mistaken. At about 1.30pm three shells hit the left hand (southern) end of the tunnel causing a collapse and burying 38 men and injuring a further ten.

The regimental history of the 94th Reserve Infantry Regiment, described what happened that day:

On 18 March between 6 and 9 clock in the morning our artillery began bombardment using mustard gas ... Apparently in retaliation for this, the French [commenced a barrage] from 12:30 noon to 6 clock in the afternoon with heavy mines.... The effect of our artillery, however, was initially too weak .... The enemy shelling was directed mainly against the Kilian tunnel, which was lying on the slope of the second trench C 2, approximately 140 meters behind the front line...

Most of the 6th Company manning C 2 had taken refuge in the gallery, which was between 4 and 6 meters high with 16 exits. At about 2 o'clock in the afternoon the left side of the tunnel, where the earth that covered it was weakest, received in quick succession three hits, collapsing approximately 60 meters in length and burying 1 Warrant Officer, 1 Vizefeldw., 7 NCOs and 25 men. In addition, 10 men were wounded by burial, and another man killed by machine gun fire. Despite this heavy loss was the attitude of the 6th company remained excellent. The position at nightfall was immediately re-occupied, so that the enemy, if they attacked, would be met with vigorous resistance.

At around 8 in the evening there began anew a strong barrage from the enemy artillery against C 2 and this continued to 10 clock at night. It was only now possible to try to dig out the victims. This was achieved only with the involvement of pioneers and infantry with wagons. Unfortunately, only the dead have been recovered. Finally, the work had to be stopped because of technical difficulties. At night, the sixth Company [gave up the attempt] and took shelter in the Bader tunnel. The mustard gas bombardment was repeated the next day, the enemy did not reply anymore.

As highlighted above, at the end of the bombardment the survivors began a frantic rescue attempt, but were hindered by further French shelling from 8pm to 10pm. Seventeen bodies (other sources suggest two men were rescued but died soon afterwards plus thirteen bodies) were recovered. These men are buried at the German military cemetery at Illfurth. However, twenty one men from the company remained unaccounted for. The regiment was relieved on 4 April. In the period December 1917 to the date of relief, a total of 43 men from the 94th Regiment had been killed.

Although withdrawn, the German 94th Infantry Regiment, together with the rest of the 22nd Reserve Division, was to face an even harder time as they were destined for Flanders to take part in Operation Georgette.

A wooden memorial was erected in March 1918 near an entrance to the tunnel, which listed the missing soldiers with their rank and places of birth. Subsequently, a stone memorial was erected - the existence of which had been totally forgotten until it was rediscovered during the excavations. The final memorial constructed out of red granite, bearing the names of the twenty-one missing was inaugurated 27 May 1962. For another 40 years the site remained all but forgotten, but plans for a bypass changed matters.

In 2007, an archaeological evaluation, conducted by the Rhineland Interdepartmental Archaeological Centre (PAIR) identified the remains of the German front-line trenches, and a stairway to the tunnel; however, the position of Kilian tunnel could not be accurately determined because of safety concerns. 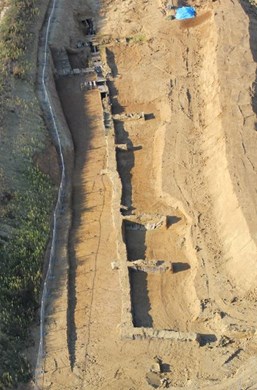 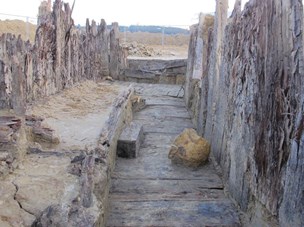 In 2008 work on the Aspach bypass started and the old memorial, erected in 1968, was moved to the German military cemetery in Illfurth. By May 2010 construction work was well under way. Substantial amounts of war material had been unearthed, and a dugout had been discovered but Kilian tunnel remained elusive.

Six months later, on 29 October 2010, however, the tunnel at last was located when, during the works, the Lerchenberg hillside had to be graded and levelled. During this exercise, a wooden frame was exposed along with part of the tunnel system; artefacts started to appear, including a camp bed and fragments of a jaw bone. Work was halted and the archaeological team from PAIR returned.

It was during this archaeological work that the recovery of the missing soldiers took place. Besides the remains of the soldiers, other personal effects such as dog tags (which were unfortunately illegible) were recovered.  The excavations revealed the tunnel collapsed at two access stairs as well as evidence of the relief operation. The twenty one individuals were found lying on their sides or sitting. Along with military equipment, many poignant personal effects such as boots, helmets, weapons, wine bottles, spectacles, wallets, pipes, cigarette cases and pocket books were also found on or near the bodies. Even the skeleton of a goat was discovered, this was assumed to be a source of fresh milk for the soldiers. The excavations show that the gallery was reused after the collapse of 18 March. An additional staircase was built and the area adjoining the collapsed section was blocked.

The discovery of the tunnel has changed the theory as to what occurred that day in 1918. Originally it was thought that the tunnel collapsed after explosions on the surface, but it is now believed that a shell entered the tunnel and caused an explosion of ammunition and grenades stored there. This explosion caused the collapse of this section of the tunnel. 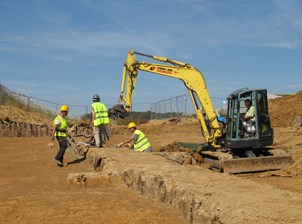 By November 2011 the archaeological work was completed and a memorial service was held on 20 November.

After further archaeological examination, the bodies of the twenty one soldiers will be given to the French Department of Veterans Affairs and War Victims (Office national des anciens combattants et victimes de guerre) who will pass the remains to its German counterpart (Volksbund Deutsche Kriegsgräberfürsorge). Any relatives who are found may request the return of their relatives' remains, but it is likely that the soldiers will be finally laid to rest with their comrades at the German military cemetery at Illfurth.

With many thanks for the photographs from: