The VC that never was: Colonel Souter's gallantry against the Senussi, 1916

Colonel Hugh Maurice Wellesley Souter was born in India in 1872. Originally commissioned into the Manchester Regiment, he joined the 14th Murray's Jat Lancers (of the Indian Army) in 1896, and served in the Tibetan Campaign of 1903-4, being mentioned in dispatches. 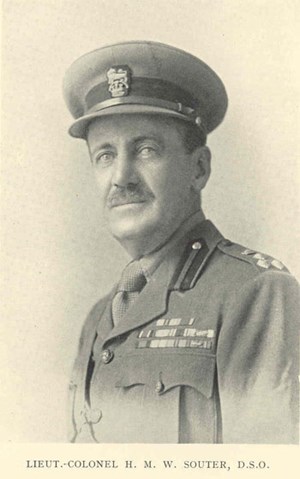 In the First World War Souter served in France, Belgium, Gallipoli, Egypt, and Mesopotamia. He received the DSO and the CMG, and was four times mentioned in dispatches, retiring in 1921. 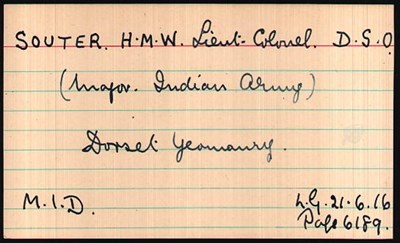 Image: one of the cards detailing Souter's "MIDs" 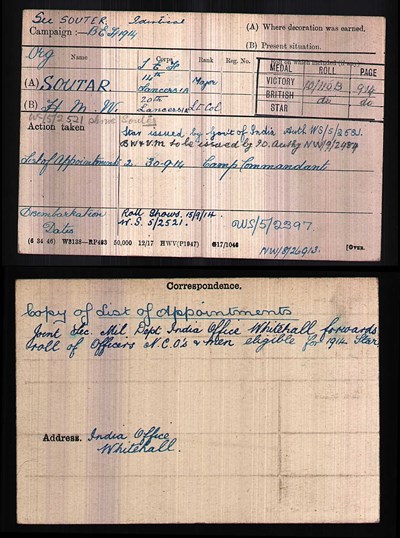 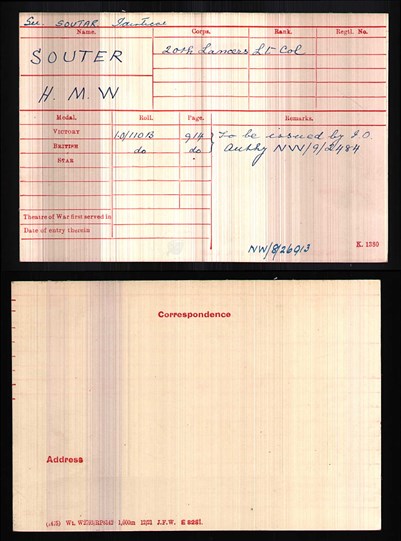 Images: the two Medal Index Cards of Lt-Col Souter. The fact that there are two cards is unusual, but is explained by the fact the 'main' card spells his name incorrectly, so it can be assumed the second one was created to cross refer to the (incorrect) original card. Details of the WFA's saving of the Medal Index Cards is to be found here.

After the withdrawal from Gallipoli, Souter's regiment (the Queen's Own Dorset Yeomanry) was involved in the campaign in the western desert against the Turks and a tribe called the Senussi. The Turks had persuaded the Senussi to attack the British positions in Egypt in order to threaten the Suez Canal from the west.

The campaign in the western desert was effectively won on 26 February 1916 at Agagia in an action that involved a cavalry charge by the Queen's Own Dorset Yeomanry. This charge, made over open country against infantry supported by machine guns, was undertaken entirely on the initiative of Colonel Souter, and resulted in the complete rout of the enemy. The fact that the infantry were desert tribesmen in no way diminishes the significance of this action. 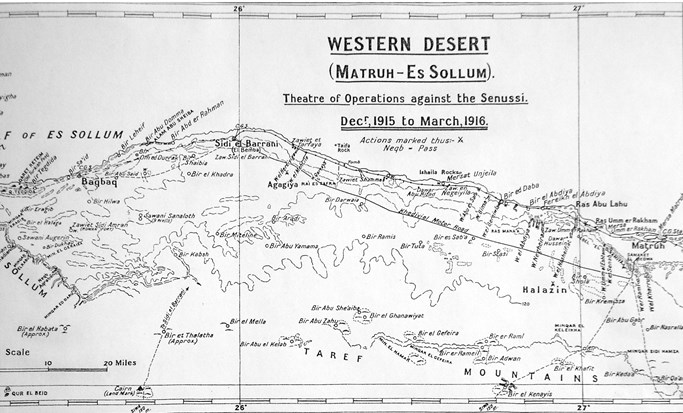 Image: map of the Western Desert

The Western Field Force, under Major-General Peyton, had advanced along the coastal strip from their base at Mersa Matruh and, on 26 February, encountered the enemy in entrenched positions. After the British infantry had dislodged the Senussi from their trenches, the armoured cars were called to harass them and to prevent them taking up any other defensive positions. By 3.30pm, the infantry had lost contact with the retreating Senussi and the armoured cars had become bogged down in the sand. Souter realised that the Senussi would escape unless decisive action was taken and, so, despite the exhausted state of the horses and men (the horses had not been watered for over twelve hours) he ordered his regiment to mount and form ranks. 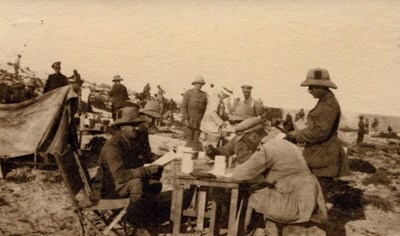 Lt Blaksley of 'B' Squadron described the moment:

Imagine a perfectly flat plain of firm sand without a vestige of cover, and 1200 yards in front of us a slight ridge; behind this and facing us were the four machine guns and at least 500 men with rifles. You might well think it madness to send 180 Yeomen riding at this. The Senussi, too, are full of pluck and handy with their machine guns and rifles, but they are not what we would call first class shots; otherwise I do not see how we could have done it. We were spread out in two ranks, eight yards roughly between each man of the front rank and four yards in the second. This was how we galloped for well over half a mile straight into their fire.

As Blaksley states, the Senussi were not very good marksmen and as the Dorset Yeomanry rapidly approached the Senussi with swords drawn, (the regimental cooks were also said to be joining in the attack – armed with meat cleavers instead of swords) the Senussi failed to lower their sights and the bullets whistled over the heads of the approaching horsemen.

"Isn't this splendid?" exclaimed Souter's aide-de-camp as the Dorsets closed on the Senussi. "Yes" replied Souter, "I have waited twenty four years for this"

In the face of the galloping Dorsets, some of the Senussi broke and ran. This was the scenario that cavalry had strived for.

A fuller detail of the action can be found in to this article: One of the last true cavalry charges: The Charge of The Dorset Yeomanry at Agagia, Western Desert, 26 February 1916

On breaking through the enemy's lines, Souter's horse was shot from under him, and he found himself in front of Gafaar Pasha [Ja'far Pasha al-Askari (1887-1936), later twice Prime Minister of Iraq], the commander of the Senussi who, with his staff, surrendered to him. 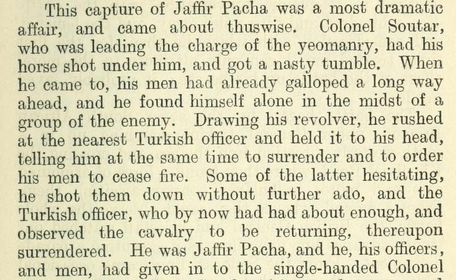 Image: extract from Prisoners of the Red Desert by RS Gwatkin-Williams (1919)

Pasha said afterwards said, "C'est magnifique, mais ce n'est pas selon les règles" (It's beautiful, but it is not according to the rules); going on, "No one but British cavalry would have done it."' 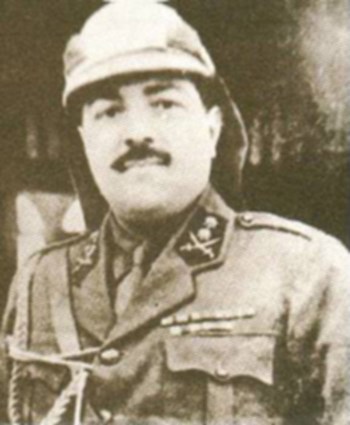 For his gallantry, Souter was awarded the DSO, but is seems that Major-General Peyton thought he deserved the award of a Victoria Cross.

Writing to Souter on 9 April, just six weeks after the action, Peyton said,

I arrived in London on Friday & on Saturday went to the War Office to enquire about your V.C. as I saw you are suggested for a D.S.O.

He reports what he was told by the Military Secretary [Major-General Sir Frederick Spencer Wilson Robb]. Three 'senior generals' considered each recommendation, and their opinion was submitted to the King by the Secretary of State.

All agreed that in ordinary times both you & Westminster [The Duke of Westminster who had been involved in another action] would have got it but the large number of gallant acts that have to go unrewarded in France militate against grants elsewhere.

Peyton went on that he did not 'mean to leave it at that', and said he would be seeing

Lord K [Kitchener] tomorrow aft. & also [Sir William] Robertson & will press the case as if ever a [Victoria] Cross was well earned yours was. Moreover if they are contented with giving you a D.S.O. what can they do for your squadron leaders.

Peyton had 'an idea of getting at the Member for Dorsetshire', to 'see what he can do', but he had 'great hopes that K will help'.

A month later, on 2 May, Peyton wrote again to Souter (a letter from Souter had crossed with Peyton's). Peyton wrote this time:

...they had denied your V.C. & also Westminster's on the grounds that the standards set by the gallant deeds in France had been set so high.

Peyton 'could not accept that' and 'appealed against the decision'. The Military Secretary said it would not be changed.

I appealed personally both to Lord K[itchener] & His Majesty when they were good enough to grant me audiences. Both agreed that your performance was a good V.C case but gave the same reason about the standard in France.

Peyton went on to say that he knew

...for certain that one if not two of the so-called V.C Committee voted for it to be given. Your brevet also has been thrown out. Apparently the Army in France is very jealous of honours given elsewhere.

Souter did not manage to see Kitchener or FitzGerald as they both perished when on their way to Russia on 5 June 1916 on board HMS Hampshire.

The Queen's Own Dorset Yeomanry continued to see much more action in the Middle East, serving in Palestine in 1917 and 1918.

Colonel Hugh Maurice Wellesley Souter was never awarded the VC and he had to be content with the DSO. He died in Sydney, Australia, in 1941.

Hell in the Holy Land: World War I in the Middle East by David R. Woodward

One of the last true cavalry charges: The Charge of The Dorset Yeomanry at Agagia, Western Desert, 26 February 1916

For Valour: The History of the Victoria Cross