The War at Sea in Home Waters

The war at sea was wide ranging from engaging with the German High Seas Fleet when it put to sea to maintaining the supply of food and materiale to the UK. Part of this strategy involved the Admiralty utilising domestic fishing vessels to defend our waters against the submarine menace. Often this was a perilous task both from the U-boats themselves but also the mines they laid. Add to this the often atrocious weather it is no surprise that lives were lost. It was such an event that took its toll on two Scottish fishing vessels on 27 December 1915, namely the steam drifters Ferndale. and Ladysmith. 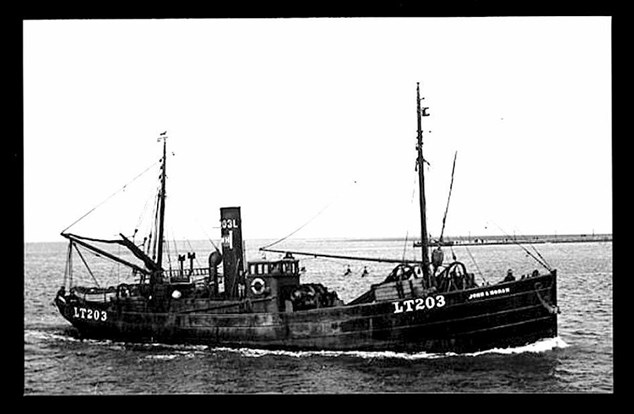 Above: A typical steam drifter

Both vessels had been hired by the Admiralty and put to use as armed patrol vessels/minesweepers. Sea mines or contact mines comprised a cylindrical drums containing explosives attached to a wire cable or sinker which could be adjusted to any length so that the mine would float just below the surface of the water. Fixed to the outside of the mine were horns connected to the exploding mechanism. As soon as a passing vessel touched one of the horns, the mine exploded. 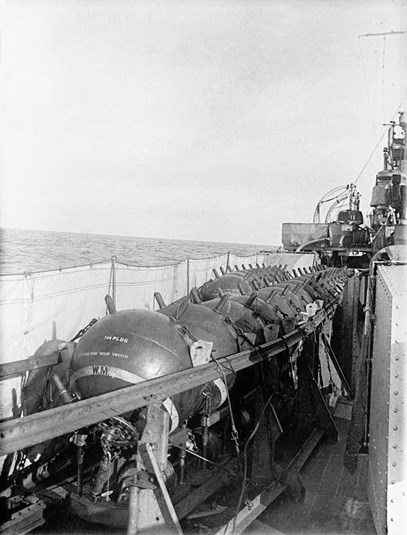 Horned contact mines on HMS Aurora. Legends on mine are "1in Plug" and "Fitted for deep switch". IWM photograph SP 1196.

Sea mines were deployed in vast numbers within inshore waters. The very basic method of tackling the menace was to employ two vessels steaming side by side a short distance apart, dragging between them a length of cable which was fitted with a steel cutter. After snagging the mine, the cable would cut through the mine's wire sinker, the mine would then float to the surface where the crew would explode it harmlessly by rifle fire. 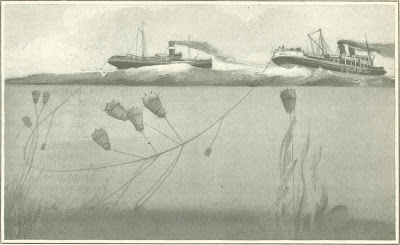 Above: Diagram showing how First World War trawlers would sweep up a row of enemy anchored mines

The Ferndale was built at Lossiemouth in 1910 and the Ladysmith was built at Banff, just a little to the east along the same coast in 1904 and had close associations with the fishing community of Portknockie, on the Moray Firth, Scotland.

On 27 December 1915, both the Ladysmith and the Ferndale had been tasked with the dangerous work of deploying steel anti-submarine nets at the entrance of Milford Haven however both were caught in a tremendous gale, with gusts of wind reportedly reaching 90mph. It appears that the skippers of both fishing vessels had decided to run for the shelter of the Haven, but both came to grief in the heavy seas. A crewman was washed overboard from the Ferndale, and as the vessel stopped to attempt a rescue, it was driven onto the rocks off St Ann's Head. The rocket apparatus was used in an attempt to get a line on board in order to rig a breeches buoy, but the wind was so strong it proved impossible and all the crew were drowned. What happened to the Ladysmith is uncertain, but she too was also lost in the gale.

In early 1916, the ‘Banffshire Advertiser’ reported that all 9 crew members of the Ladysmith had been lost. Four of the crew, including the Skipper, came from the small fishing community of Portknockie, a few miles from Buckie. The loss of fishing boats was not new to such communities but the scale of this loss was described by the local newspaper as ‘the heaviest loss to hit Portknockie since the loss of the Evangeline in 1905, when eight crew members from the village were lost’.

The Skipper John Wood, an Elder in the local Free Church, was aged 51 and left a widow and four adult children. His son, Engineman James Wood, aged 20, was also lost.  His brother, William George Wood, aged 49, left a widow and young son.  Also lost was Deckhand William Mair aged 19, who was the son of the steam drifter's owner, James Mair. William had worked in a solicitor’s office in Buckie before the war. 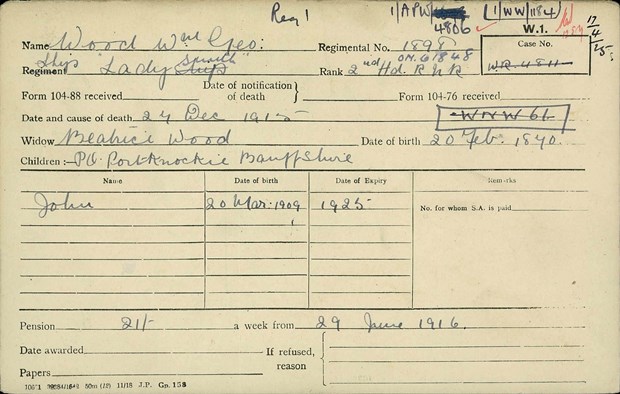 Above: The pension card for William George Wood 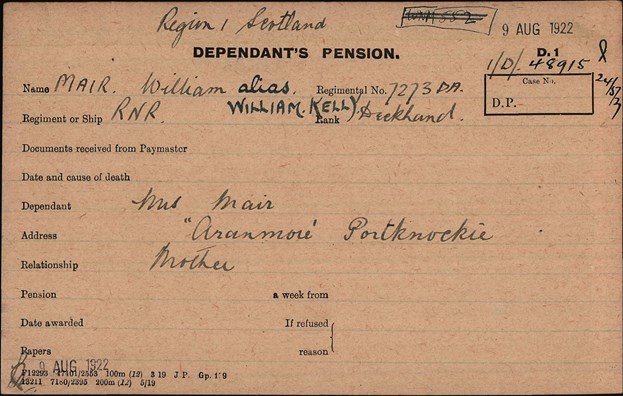 Above: The pension card for William Mair - it will be noted that he used an 'alias'.

Although the Pension Card indicates an ‘alias’, there is no mention of the name ‘Kelly’ on the RNR service record. It is possible that this is an example of what are known locally as ‘tee names’ in north east fishing villages, used to differentiate different people with the same surnames. Mair is a common surname in the area.

All four of those from Portknockie lost from the Ladysmith are commemorated on the Portknockie War Memorial. 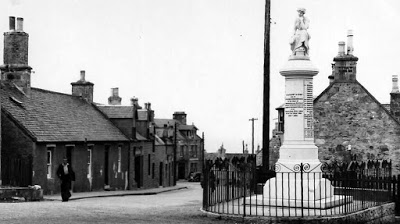 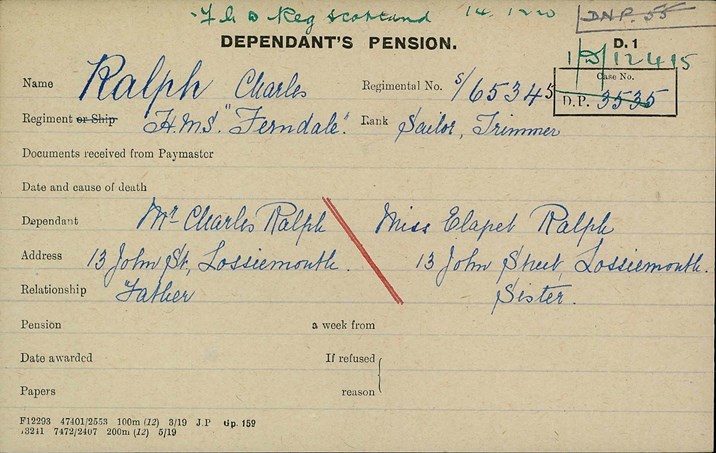 Above: The Pension Record card for Charles Ralph.

The Skipper, James Garden, left a widow and six children. His younger brother, Deckhand Alexander Garden (whose Pension Record Card is shown below) lived with his two sisters in the town. (Another brother, Joseph, had served in the Royal Naval Division and had been taken a prisoner of war at Antwerp).

Deckhand Alexander Edward left a widow and grown up family. Deckhand John Garden was a nephew of the Skipper and had lived with his young wife, his invalid mother and his brother in law, Deckhand Robert Mitchell. The youngest member of the Ferndale crew was Trimmer Charles Ralph, aged 19, who acted as the cook. His was the only body to be recovered and is buried in Milford Haven cemetery. All are commemorated on the Lossiemouth War Memorial. 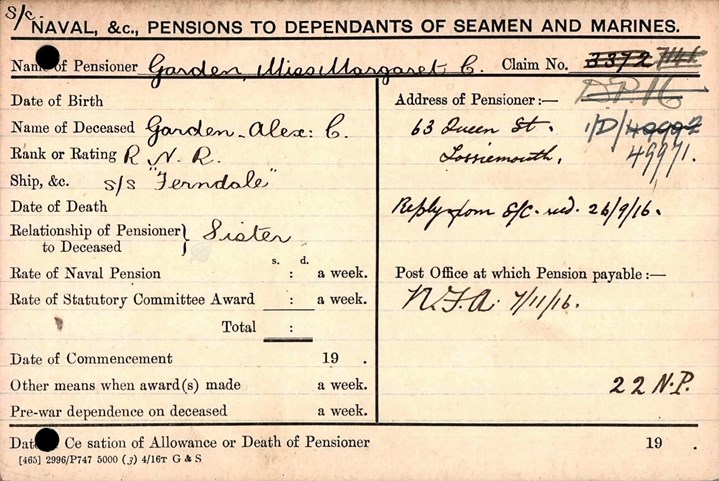 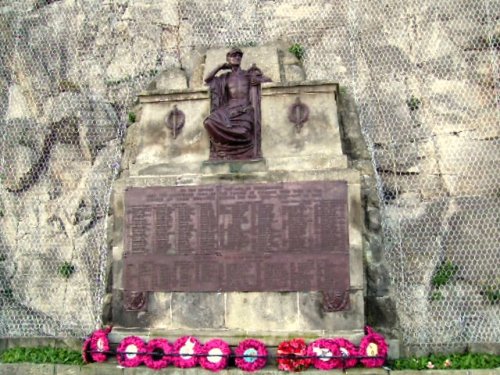 Above: The Lossiemouth War Memorial.