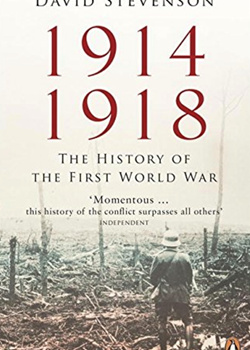 1914-1918 is the product of the author's success at collating a vast amount of evidence in order to provide 200 pages of compact information.  Stevenson provides a political, diplomatic and social history of the war period and its context. In some works these aspects are often subordinated to military events, but in reality all such factors have a great impact on a nation's history during hostilities.

Though taking a chronological approach, subjects are also dealt with thematically.

The world scene is set with 'The Destruction of Peace'; the pre-1914 era is described as one of globalisation, not repeated until well after the Second World War.

The political prelude to war is painted on a wide canvas.

The 1914 campaign is described as 'The Failure of the War of Movement'.

Interestingly, whilst Germany referred to 'Weltkrieg', in Britain reference was made to 'the great war' - a term applied to the Napoleonic conflict.

After addressing the outbreak of war, a chapter is dedicated to 'War aims and Peace negotiations' - Clemenceau's aim 'is to win'. The inter-connection between the two facets is examined, the prospect of an earlier peace was not impossible, but with the development of war aims, the gulf between the protagonists became even wider.

There are detailed chapters on strategy, technology and tactics, manpower and morale, armaments and economics, not forgetting naval warfare and blockade.

Except for the Ottoman Empire and Bulgaria, the conditions on the home fronts of each of the nations is well handled, the author pointing out that as the chasm of fear and hatred between the opposing sides widened, their demands on each other increased.

The author cites Spring 1917 as the turning point, leading to the revolution in Russia and the entry of the Americans.

He calls the next chapter 'Towards Exhaustion'.

The 'Last Throw' of the Central Powers deals with peace in the East followed by the Spring offensive in the West.

Thereafter the conflict in its wider sense is discussed, the military aspect being dealt with as part of the whole picture.

The events leading to 'Cease Fire' cover the political and social circumstances in detail and the military aspects are woven into the story.

The fourth part of the book is called 'Legacy', followed by details of the long term financial cost of the war and its aftermath.

[This review first appeared in Stand To! No.75  January 2006. The journal of The Western Front Association is sent to all members three times a year. Archived editions of Stand To! are also available, a year after print publication, to all members using their Member Login. There are over 2,000 book reviews in the archive. ]