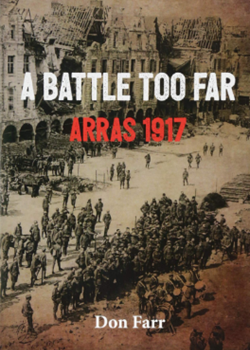 The fighting around Arras in the spring of 1917 – three battles of the Scarpe and two of Bullecourt – were not the choice of Sir Douglas Haig. They were forced upon him by the interference of British politicians (principally David Lloyd George) who subordinated British military policy to the ‘war–winning’ strategy devised by the French commander, Robert Nivelle.

Based on very successful actions in late 1916, Nivelle was certain that the ‘violence, brutality and rapidity’ of his style of attack would rupture German lines completely and restore a war of manoeuvre. The BEF was to attack about a week ahead of the main assault to draw–in and tie–down German reserves. Only if these attacks failed would Haig be allowed to carry out his preferred offensive in Flanders.

The ever–reliable Don Farr has produced a study of the whole series of battles, while giving due consideration to French operations. He reminds us that an attack at Arras had been considered since September 1916 – when it would have completed the destruction of the German armies as they were driven from the Somme battlefield! The basic attack plan stayed on the table, with gunners arguing the odds over long, methodical preparatory bombardments or a solid 48 hours of non–stop shelling by every gun and man available.

Preparations for the attack were dogged by ill–luck. Operation Alberich, the German retreat from the Somme back the Siegfried Stellung, (The Hindenburg Line), caused severe logistical and planning problems, and provided a shorter line with a local reserve of counter–attack divisions. Some very serious breaches of security on the French sector removed any prospect of surprise and the weather could not have been any worse.

The attacks by the British First and Third Armies on 9 April 1917 were such astonishing successes that it left British commanders temporarily at a loss as to what to do next! This was largely a consequence of the fact that the best results came north of the Scarpe while the bulk of reserve forces were kept south of the river. The 24–hour ‘pause’, to prepare the exploitation phase, was just what the German Army needed to recover equilibrium and pour in reinforcements – and to send the defensive expert, Colonel von Lossberg, to prepare for future eventualities.

Valuable appendices discuss the German Army’s performance and response, the ultimately decisive role of artillery in the battles and the grim experiences of Allied air forces facing a resurgent Luftwaffe’s new aircraft and tactics. Other essays cover the importance of underground shelters in the chalk down lands around Arras and the slow but steady progress of the Tank Corps, still too few in number and vulnerable to mechanical breakdown. Proper consideration is given to French tank experience and the sorry tale of Australian infantry’s unhappy relationship with tanks at Bullecourt is explained.

This ‘battle too far’ was fought under British obligation to its coalition partners. Whether it should have been continued for quite as long as it was, in the teeth of mounting casualties for little substantial gain, will be debated for a long time to come.