A Short History of the First World War by Gary Sheffield 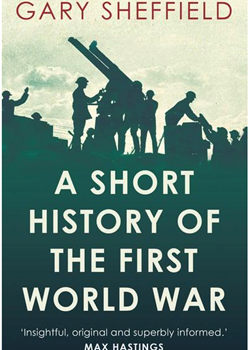 Writing a book to cover the first truly global conflict in a concise and meaningful way might seem daunting. Professor Sheffield is not the first to write a ‘short history’, nor will he be the last. He has managed to produce a very clear account of the war; from its causes, through its conduct, to its far from satisfactory conclusion and aftermath.

This work has been produced using the most up to date thinking on the subject; both the author’s own and his analysis of other leading historians’ opinions.

Very succinctly, the book shows how the Second Reich under the at best, unbalanced Kaiser, had by 1914 destabilised Europe, with the other great powers looking nervously over their collective shoulders. The Kaiser had by then become an irrelevance to his generals. The book goes on to illustrate the reasons for the collapse of the old empires and the rise of US hegemony, also demonstrating how the legacy of the Versailles settlement has a direct link to present world problems.

This book also delivers quite a bit of ‘myth busting’, so that anybody new to subject won’t go running away with any of the ‘lions led by donkeys’ nonsense.

The book has a number of photographs of the major protagonists and five general maps of the main battlefronts on which the present reviewer has to declare an interest as she drew them!

For me this book was quite a page turner; history at its most accessible for all abilities.

In short, I would recommend this book to anyone who has had their appetite whetted by such titles as The First Day on the Somme and is ready to study the war in more detail.