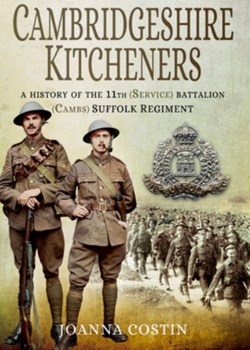 Following the outbreak of war in the summer of 1914 and the subsequent call for volunteers, the men of Cambridgeshire were not slow in stepping forward in the service of their country. However, in a departure from standard practice, these enthusiastic new volunteers did not join their county regiment. For organisational reasons they were enlisted into a separately designated Cambridgeshire battalion of the Suffolk Regiment – the 11th (Service) Battalion. The author contends that this ambiguity in local affiliation has meant that the skill, bravery and dedication of the Cambs Suffolks (as they were known) has not been given sufficient recognition in modern times. In telling their story the author is seeking to raise the profile of the Cambs Suffolks by describing the momentous efforts made by these men from the flatlands of Cambridgeshire.

The book takes the form of a chronological narrative over seventeen chapters starting from the early days in Cambridge through to the closing stages of the war at which point the battalion was moved from the 34th Division to the 61st (South Midlands). In particular, the reader learns about the battalion’s heroic involvement on the first day of the Battle of the Somme in 1916, the difficult assaults undertaken during the Battle of Arras in 1917 and the critical defensive actions on the River Lys in the spring of 1918. In addition to writing about the military actions themselves the author also examines the impact of the battalion’s involvement in the war on the home population back in Cambridgeshire. Indeed, there is a whole chapter devoted to the role of women in the pre-Derby scheme era of recruitment. The author injects personality into the description of the men who served by quoting extensively from personal diaries and letters.

Unit histories such as this one can sometimes be difficult to read for anyone who does not have a particular connection with the events being recounted. However, in this instance, the author has enriched the narrative with some excellent observations about the development of battlefield tactics. For example; the use of counter battery artillery fire, the introduction of tanks and the evolution of airpower. Furthermore the leadership capabilities of key players such as Haig and Rawlinson are discussed in a more balanced way than is often the case (although this reviewer would take issue with the observations made about General Ingouville-Williams’ popularity).

The author has an academic background and this is used to excellent effect in the range of sources used. The relevant battalion, brigade and divisional war diaries are referenced throughout and the material covering tactical developments is sourced, to a large extent, from the Imperial War Museum Archive. Local newspaper reports are quoted extensively and where there is a lack of certainty the author provides an appropriate caveat. The references relating to each chapter are laid out in a logical way and there is a useful appendix listing all of the men who are mentioned in the book.

In the reviewers opinion the book would have benefited from a few maps. For readers who are unfamiliar with the geography, some of the movements are a little hard to follow. Also the description of the battalion’s involvement in the 1918 Kaiserschlacht may have resonated to an even greater extent had some of the more candid observations articulated by Cambs Suffolks veteran F. Haydn Hornsey in his book Hell on Earth been used (though his diary is quoted). However, these are minor points which should certainly not detract from an overall impression of thoroughness and quality.

By blending the unit history with a vivid description of the impact on the home front and an excellent articulation of the strategic and tactical context the author has produced a book that will inform and entertain at all levels. This book will go a long way towards restating what the people of Cambridgeshire knew in the immediate post war period – that the men of the Cambs Suffolks deserve a huge amount of recognition and appreciation for all that they achieved during the 1914-18 war.