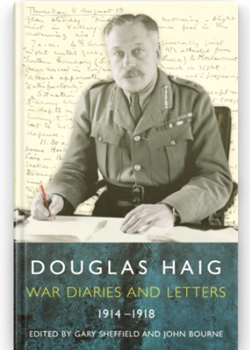 No one General has suffered such vilification over the years as Douglas Haig. In this most recent edited version of his famous, some would say infamous diaries the reader at last comes to see the man for what he was, a man of integrity and much maligned by popular culture. For to long the popular view of Haig has been the much vaunted one of “the Donkey, who led Lions to their slaughter”.

Gary Sheffield and John Bourne have edited the Haig diaries with care and understanding. They clearly explain the differences between the written and the typed manuscripts. Many lesser historians have sought in the past to use the existence of the two diaries as a way of attacking Haig. Many have said that he doctored the typed manuscript. If he had, would he not with hindsight have removed the areas of the diary that made him look inept?

The forty-two page introduction to the diaries should not skipped. In it both editors spend much time leading the reader through a balanced review of Douglas Haig’s career in the Great War.

The diaries show the human side of Douglas Haig, a man who realised that if a war with Germany occurred it would be long and bloody, a factor many politicians failed or refused to accept. The diaries certainly play down the myth that he was averse to new tactics and weapons.

One should remember when reading this book that Haig wrote his diary because he had from the earliest age been encouraged to keep such a journal. He certainly used the diaries to unburden himself, in doing so he expressed personal views on fellow officers and politicians that are most certainly heartfelt.

This book is certainly not written to apologise for Haig’s many faults. In it he can be seen to be unjust and at times callous towards those who he believed were not pulling their weight. But one should remember that he always held the firm belief that we would win the war. Time and again he clearly states in the diary that his only aim is to beat the Germans and to expel them from French soil.

The format of the book has also been well structured with short biographies to all those named in the text appearing at the bottom of the relevant page, rather than in a separate index at the back of the book.

Many critics of Douglas Haig fail to remember some important points, those are he never sought to defend his reputation after the war, nor did he publish his memoirs. He had nothing to prove, and he certainly did not produce an autobiography in the self-congratulatory style of politicians such as Lloyd George and Winston Churchill.

I recommend this book to anyone who wishes to expand their knowledge and understanding of Douglas Haig, a General who was not a Donkey!