For what we have done: The first attack on Bellewaarde, 16 June 1915 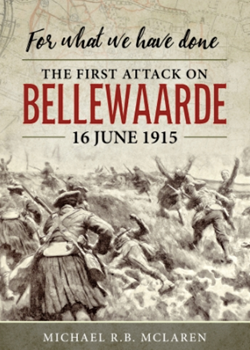 By Michael R B Mclaren

As the Official Historian, Sir James Edmonds, put it, ‘The story of 1915 is but a commentary on the straits to which the British Empire was reduced by lack of preparedness for war, and the consequent heavy cost in life and material without result’.

The regular British Army had suffered enormous losses in 1914, which had to be made up with inexperienced Territorials and New Army troops. Heavy artillery and all types of artillery ammunition were in short supply. Men and guns had also been sent to Gallipoli. Whilst the Germans had struggled to break the Western allies in 1914, they had occupied almost all of Belgium and much of industrial northeast France, establishing strong defensive lines. Thus, they were able to support their Austrian allies in 1915 and inflict great defeats on the Russians. In consequence, Britain was under great pressure to launch attacks in support of its allies, even though it lacked the effective means to do so.

With the French due to launch a great offensive in June, the BEF was obliged to make subsidiary attacks. At Ypres, the Germans, assisted by gas, had recently driven the Allies off the higher ground to the east, exposing the whole Salient to their artillery. An assault on the Bellewaarde Ridge seemed to offer a useful diversion and the recovery of some important ground.

Aylmer Haldane’s 3rd Division was to make the attack. Although, by later standards, artillery support was limited, the infantry initially managed to seize three lines of trenches. Unfortunately, in spite of efforts made to establish communication, British batteries remained unaware of the progress made and many troops were killed by ‘friendly’ fire, forcing a partial withdrawal.

Allenby, the corps commander, trying to learn from previous failures, insisted that reinforcements (inexperienced troops of 14th Division) should be pushed forward regardless to maintain the momentum of the attack. However, with the troops crammed together, they now suffered terribly from the German artillery. The end result was almost 4,000 British casualties for little gain.

This all sounds very unpromising material, but the author has produced a tremendously detailed and valuable study, using an enormous range of sources, official and unofficial, and has taken German accounts on board. After offering background context, he shows that Haldane had taken much trouble to plan his attack, which included learning from previous failures, the limited means at his disposal and a timetable dictated by others.

These plans were, however, superseded just three days before the attack! Objectives were widened and he was now given five brigades, but no more artillery. His staged assault was replaced by a continuous one. What went well and what did not are carefully considered. Haldane comes out well, and Allenby not.

Bearing in mind the mistakes that followed, especially at Loos, it would be easy to conclude that the British Army learned nothing from Bellewaarde and the other early 1915 attacks, but the author shows this was not the case. Most problems did not, however, have a ready solution. Communication across the battlefield remained difficult throughout the war. As for troops lacking experience and shortages of heavy guns and artillery ammunition, these would only gradually be improved. Moreover, the Germans were learning that their defences had to be stronger. Unfortunately for the British, they had to continue to attack, despite unfavourable circumstances, in order to support their allies.

The author is a graduate of Birmingham’s Great War Master’s degree programme and writes well. This book is both an excellent study of the battle and a fine memorial to those who died in it.

Extensive footnotes provide not only sources, but potted biographies of senior officers and of many of the casualties. Maps are numerous and many illustrations are embedded in the text. Somewhat pricey as a paperback, but highly recommended.