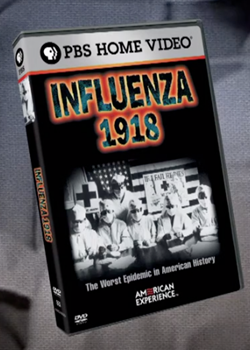 This documentary, freely available online from The American Experience is a harrowing though  watchable introduction to the Flu pandemic of 1918, its outbreak and impact, and the response, given that the world was at war and America sending tens of thousands of troops to Europe.

It makes for a different perspective on Covid-19. It also presents a stark reality - a virus of this kind is deadly, moves fast and can very quickly get out of hand. We are better able to cope in 2020 than in 1918, though how India and Africa cope is yet to be seen. In 1918 millions died in India. America lost around 600,000.

Wonderfully narrated by Linda Hunt, the documentary has the right balance of gravitas, with a handful of witnesses, young children at the time, in the 80s when the documentary was made, an expert insight. The music often played by a haunting obeo is doomladen. The pace is quick with clips of interviews barely lasting a sentence before the guiding voice of the narrator takes over. As an introduction to the subject it couldn’t be better.

‘The American Experience’, a popular series of 50 minute long documentaries of the 1990s, might be edutainment, however, it is worth viewing as a timely, insightful and a potential catalyst for further study. The next step might be the companion book ‘Influenza 1918 by Lynette Iezzoni. This is sadly not available on Kindle yet, with copies taking a few weeks to come over from the US.

I review both the documentary and the book below. 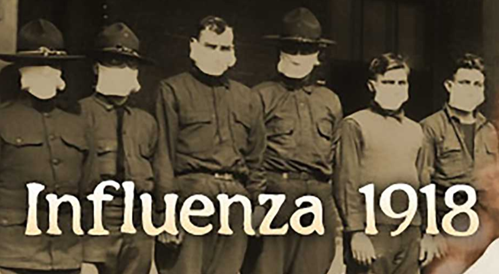 The most haunting refrain, that you will be chanting yourself by the end of the programme, is the playground ditty:

“I heard a little bird

Its name was Enza

I opened the winda

And in flew Enza”

Covid-19 defies poetry so far, though some will try.

We learn that Spanish Flu killed more Americans than all the wars in the 20th Century: some 675,000 in total.

The witnesses from the time, ages 5 to 7 at the time and speaking 80 years after the event experienced the death of their siblings and parents, and in one case lived over the shop: a crowded funeral parlour.

In New York the initial response was flat denial. With the US committed to sending troops to Europe, that September saw millions were called to the draft. When everything should have been slowing down with enlistment of soldiers and munitions manufacturing everything was intensifying and speeding up. The influenza virus fed on it.

Rumours were rife, Germans were blamed and there was a lot of guesswork and quackery. The facts are that Spanish Flu manifested itself as a raging fever, with nose bleeds, pneumonia and difficulty breathing as the lungs collapsed and patients drowned.

Fundamentally, the science of the time, ignorant of viruses, tried to tread Spanish Flu as a bacteria; they failed. In weeks hospitals were overflowing with the sick on stretchers or the floor waiting for the beds to clear. Coffins were in such short supply that many were stolen. Mass graves become the norm.

In time laws restricted movement and enforced the wearing of masks, but then, as now, wearing a mask against a virus is ‘like trying to keep out dust with chicken wire’, or stopping flies with a commercial fishing net. It doesn’t work.

There was a ban on public gatherings. Schools, bars and theatres were closed. 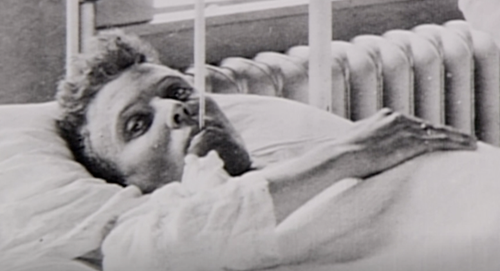 As an insightful commentator states, An American characteristic is that we have to do something even if it is wrong.’

Over the 31 days of October 1918, the flu killed 195,000 Americans. Soldiers dying were treated as casualties of the war.

Violence broke out. A health inspector shot a man who refused to wear a mask

Then in early November 1918 the pandemic began to ease.

John De Lano, a boy of 7 in 1918, who lost his young mother, and several school friends to Spanish Flu. It left him forever fearful of life, “No one is safe’ he says, “Terrible things can happen to anybody”. 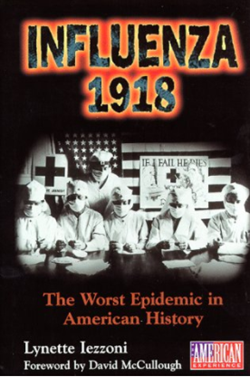 Lynette Iezzoni’s book is the companion to the episode ‘Influenza 1918’ of the PBS Series The American Experience.

Influenza 1918 reminds me of books by Lyn MacDonald; there are numerous recollections from people who recall the pandemic, with the addition of witnesses from the era who kept a diary, or an account, or newspapers of the time. A transcript of the documentary padded with circumlocutions on the history of pandemics ‘as far back as recorded history’ and the geography of its spread would be a fair analysis.

There are some inaccuracies which might have been corrected by an editor who knows their First World War history and the epidemiology of Spanish Flu. The Pandemic in the US did not start in the US with the burning of manure from the tens of thousands of horses kept at Fort Riley, Kansas on 9 March 1918 as suggested, nor was Archduke Ferdinand of Austria-Hungary - Prussian. For those with more than a passing knowledge of the First World War this will grate. It may also feel awkward to have Spanish Flu, as we know it, constantly referred to as ‘The Spanish Lady’ and the disease referred to throughout as ‘her’.

The disease was far more likely that it was transported to North America by troop, passenger and cargo ships, with the earliest outbreaks beginning in Boston where it spread by railroad down the east coast. But then, as now with Covid-19, how, when and why it emerges in different places can defy scrutiny, but it had to be brought in by someone. Spanish Flu would certainly appear to have been more virulent than Covid-19 is proving. Fort Riley from 9 to 15 March, for example, went from 1 to 522 cases. A Naval barracks in Boston went from 1 to 105 in a matter of days in August 1918.

The tone of the book, like the PBS TV documentary, is informative, journalistic and somewhat sensationalist.

We learn that a serious outbreak of flu has occurred every 20 years or so somewhere in the world over the last 150 years. Covid-19 would appear to be playing out today as Spanish Flu did 102 years ago ... with airplanes the big carrier today, ships and railroads the spreader in 1918. The response in 1918 was not dissimilar to that today, and just as hesitant, though grossly multiplied by the need to feed armies on the Western Front. Troop ships arriving in France might have 90 dead out of several thousand on board. Some were buried at sea.

In 1918 death could be prompt and was nasty.

‘One moment a person was fine, the next incapacitated, delirious, dying. Wrenching coughs produced pints of green sputum. Blood gushed from the nose. Body temperature soared to 104 or 105. Oxygen-starved skin turned blue, purple or deep mahogany brown. Massive pneumonia set it. In the end patients literally drowned in their body, fluid-filled lungs’.

Moments are spent mentioning the Black Death and plague in Byzantium in 400.A.D. Lack of detail is an opportunity squandered. What do we know about previous outbreaks of viruses around the world which can inform what is taking place now, and which the authors in 1999 implied would return one day. Moments are also spent flitting about the world offering tidbits on outbreaks everywhere from Hungary to England (read Great Britain) to Brazil and Germany. Just as a chapter on the history of infectious diseases would be of value. So would a chapter on its geography. In passing only, we learn that around the world the following numbers died from Spanish Flu.

Then again, Influenza 1918 is the story of the epidemic in American History, not a book intended to look at the experience of Spanish Fly around the world.

Finally, a deeply sobering thought, in 1918, they had to forgo the customs behind the burial of the dying - their care, wake, burial, ceremonies of remembrance and faith. We can at least stretch our knowledge of online communications to keep in touch, without exposing each other unnecessarily to this virulent, Spanish Flu like virus.

Review of PBD Documentary and complementary book by Jonathan Vernon

Finally, and I speak now as a historian who has studied and written on epidemic mortality in both the 16th Century and the 20th, in the absence of any vaccine, the only effective short term is quarantine and isolation. What is clear from Italy, France and Spain, however, is that left to spread, COVID-19 is as virulent as Spanish ‘flu, which wiped out tens of millions of people, including quite a few in Lewes.