Kitchener's Mob: The New Army to the Somme by Peter Doyle and Chris Foster 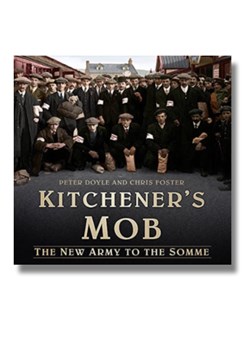 This is far from the first book about Kitchener’s 5.7 million strong new armies. The story is old and well known; since the publication of the immensely popular The First Hundred Thousand in 1915, prepared from articles by John Hay Beith MC and first published in Blackwoods Magazine (under the name Ian Hay) many works of varying quality have been published on the subject. Kitchener’s Mob must, however, be considered quite the most handsome on the subject. Even before turning to the text it is impossible not to be struck by the book’s exceptional design, elegant typography and its copious well–chosen colour and monochrome illustrations. Add an exceptional bibliography, high quality printing and binding then at £25.00, it represents terrific value for money.

The quest for quality by the publisher and authors, military historian Peter Doyle and artist/ photographer Chris Foster FRSA, is obvious on every page. Whilst the work’s oversize format (10”x 10”) may be awkward to shelve – and, it must be said, hard for this reviewer to manoeuvre in bed – page size has ensured the reproduction of large illustrations, both old, some handsomely colourised and many newly taken to illustrate uniforms, badges, recruiting posters, mementos and impedimenta. The copy is well written and cohesive.

Kitchener’s Mob is a worthwhile addition to any serious collection of books about the British Army and one which it would be impossible to offer anything but the highest commendation.