Learning to Fight: Military Innovation and Change in the British Army, 1914–1918 by Aimée Fox 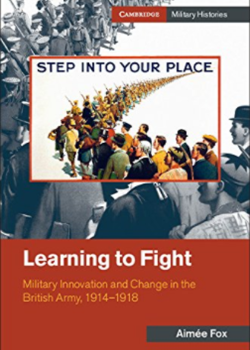 Based on the author’s PhD thesis, Learning to Fight is divided into two sections.

The first, (about one third of the volume), deals with the culture of learning in the British Army in the years leading up to the war and how that changed during the conflict. There is, of necessity, a certain amount of going over well– trodden ground, with discussion of Stationery Service (SS) pamphlets, Training Schools and the like. There is also mention of the employment of civilian expertise with examples which include sending Edward Sandeman, Associate Professor of Water Supply and Irrigation at Manchester University, to advise on the suitability of a newly–constructed water pipeline in Egypt. Finally, the first section offers some technical discussion of modern research into the methodology of learning within organisations.

The second part of the book is much more interesting. It examines the relationship between the Western Front and the other theatres of war, particularly the Middle East and Salonika, and between the various Allied forces. Interesting examples of formal methods of disseminating information, such as copies of SS pamphlets being both requested and, later, routinely sent to distant theatres, are discussed. So too are less formal methods, involving private correspondence between senior officers, and their equals and juniors within and between theatres, a network for disseminating information which seems far larger than I had imagined. It is not just the learning of senior officers that is covered.

The change from a volunteer to a vast conscript army meant that both BEF and Dominion forces had to learn how to impart military knowledge and behaviour rapidly throughout all ranks and to those without previous military experience by formal methods – such as pamphlets – and of inter– personal methods, secondment and mentoring.

This is an informative and thought– provoking volume, which provides sources which will be mined by others in the future. It has also, rightly, been shortlisted for the British Army Military Book of the Year 2018 since the experience of learning in the British Army during the Great War remains relevant today.

You can listen to an interview with Aimee Fox in 'Mentioned in Dispatches' with Dr Tom Thorpe > 'Learning to Fight'.

[This review first appeared in Stand To! No.113 October 2018. The journal of The Western Front Association comes out three times a year, as does our sister in-house publication Bulletin. The full archive of Stand To! No.1 to the present day, is available to members via their Member Login.]