'Missing-Died-Survived. The Senior Brothers and The Great War' by Guy Senior 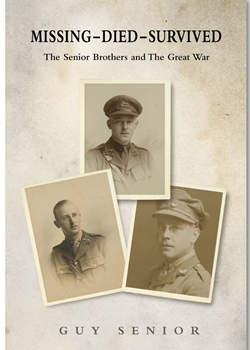 ‘Missing-Died-Survived’ is a rich, complex, family story told by the the grandson of the brother that survived. In his new book, Guy Senior, weaves together a collection of letters home from the Western Front, qualified with original records and privately held photographs from family, and family friends.

Joseph Senior served alongside Norman Macmillan in No.45 Squadron RFC; Walter Senior fought at the battle of the Somme; and George Senior saw action at the Second Battle of Ypres.

The history is sharp, succinct and well told.

The context on the Western Front is brought to life with revealing letters that are intelligently introduced and followed up. This isn’t just about the brothers, their family and friends, it is also revealing about how the war was being fought.

Before long you worry both for the brothers and their friends who have enlisted.

You want to know who in the end went missing, and whether they are now a prisoner of war; who died and how and where this happened, and the hurt that must have been felt by a girlfriend, father, school teacher or surviving friend we now know ... and of course you wonder who survived and is therefore the author's grandfather.

‘Missing - Died - Survived’ is a fascinating and compelling read which will make for an excellent evening’s talk when Guy Senior visits Western Front Association branches, an adventure which began with the eponymous collection of letters found in bundle in an attic and now brought to life in this book.

Guy Senior will be giving a talk 'Missing-Died-Survived' and selling copies of his book at the Avon Branch, 19 February at the Kingswood Community Centre, Bristol.