Peacemakers. The Paris Peace Conference of 1919 and its attempt to end War by Margaret Macmillan 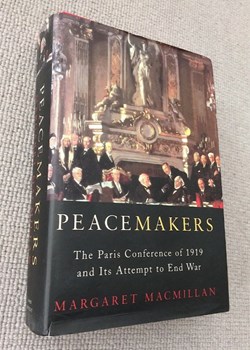 There are many books about the Paris Peace Conference and the treaties which followed. One might wonder whether another was needed, but attention should be given to the sub-title, referring to the conference and 'its attempt to end war'. In this work the mechanics of the conference are supplemented to a considerable extent with information and anecdotes about the personalities involved and the social and political conditions which obtained in various parts of the world affected by the conference. There are 500 pages of text and a formidable amount of information has been dealt with. This is assisted by devoting separate chapters to particular national developments. The work is presented in narrative style and is engagingly written; it is well researched and includes a commendable bibliography.

The book commences with the preparations by the Allies, the background of the countries and the politicians involved. There is a section on the League of Nations and the state of the world in the aftermath of war. A number of chapters deal with countries individually (Yugoslavia, Romania, Bulgaria, Poland, Czechoslovakia, Austria and Hungary), providing a service which is often neglected in other works. The broader picture of the conference which is often painted may deal superficially with peripheral events; the length of this book enables it to paint a more intimate canvas. For example, the section on Poland provides interesting detail about the political development of the state and the rivalry between Pilsudski and Dmowski, as well as how the implementation of the German-Polish plebiscites was effected. Such subjects usually receive little attention in the annals of peace conference studies, which is partly due to the lack of space because of the weight of information available on any one aspect. Here, the author is to be commended for her diligent research and attention to detail. After dealing with Europe, the book continues in its broad canvas with chapters on Japan and China, the Ottomans and Arabs, Palestine etc.

There are interesting comparisons from time to time by reference to subsequent political and military developments during the course of the ensuing century (for example, it appears the Serbo-Croat co-operation during the life of Yugoslavia has been a twentieth century anomaly). The work does not contain the terms of the Armistice or the Treaties executed in 1919 and later, nor does it recite in much detail the administration of the conference and the various sub-committees, that information would have to be obtained from elsewhere. The maps are rather disappointing and the work justifies more elaborate features. There are a number of interesting photographs. The only criticism of the text, in what was necessarily a somewhat hurried appraisal, was the author's reference to Hungary being unable to find a King after the war. This comment seems to ignore the attempt by Kaiser Karl to retrieve the kingdom in the 1920s. This, however, is a small point in a book full of useful information. As a readable account of what was happening, both in Paris and throughout the world, during this historic period, the work is to be recommended.