Rites of Spring: The Great War and the Birth of the Modern age by Modris Eksteins 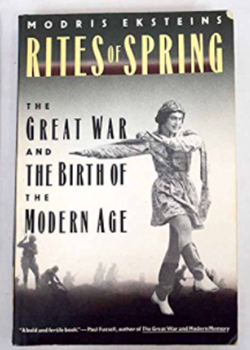 If a forensic analysis of the combat performance  of the 1st Battalion, The Blankshires Regiment, during the Battle of the Somme is at one end of the spectrum of books about the Great War then Modris Eksteins’ Rites of Spring: The Great War and the Birth of the Modern Age is firmly at the opposite end. Eksteins seeks to link Igor Stravinksy’s avant-garde ballet, Rites of Spring, which is a celebration of life through sacrificial death with the modernism, proto-fascist ideology and militarism unleashed by the Great War. Moreover, the author focuses largely on Germany and presents that country as a technological and cultural innovator in sharp contrast to the Anglo-French reverence for tradition.

To continue the cultural theme, Eksteins presents his thesis as a play with three acts. Act one, or the first section of the book, examines in detail the personalities populating the avant-garde and the cultural impact of Stravinsky’s ballet in Paris and Berlin. Act two moves to the Western Front with a focus on the first two years of trench warfare and the concomitant impact on the citizen soldiers of the combatant countries. The third act explores the aftermath of the Great War and the rise of fascism which ultimately gave birth to a second global conflict.

In seeking to encompass a period of European history from May 1913, the premiere of Rites of Spring, to Nazi defeat in 1945 Eksteins has provided himself with a very large canvas on which to enumerate his ideas. This leads to a book where a concentrated number of events – the premiere of the ballet Rite of Spring, the Christmas Truce of December 1914, Charles Lindbergh’s solo flight across the Atlantic, the publication of Remarque’s All Quiet on the Western Front – are deployed as metaphors for much more complex economic, social and political issues. The author succeeds, but only up to a point.

In the middle section of the book, the citizen soldier is presented as being overwhelmed by the scale of industrialized warfare, by the horrors that were witnessed daily by men living and fighting in this new habitat, the trenches, with violence and death ever present. Without seeking to diminish the feelings of dislocation and alienation that the Western Front undoubtedly engendered, Eksteins overlooks the considerable level of individual agency that soldiers possessed. As historians such as Tim Cook and J G Fuller have demonstrated, there was resilience not resignation amongst the troops and wide variety of coping mechanisms including letters, sports, notably football, concert parties, food parcels and plain and simple grousing.

This is a provocative book. A narrative arc that embraces avant-garde ballet, the trauma and upheaval of the Great War and, ultimately, the nihilism of Nazi Germany is an audacious feat. What is absent from Eksteins’ analysis are the more concrete actions of emperors, politicians and generals. Using the prism of modernism and aesthetics to explain the events of the early decades of the twentieth century is an intriguing idea. How successful it is you must decide by reading the text for yourself.