The Battlefields of the First World War: The Unseen Panoramas of the Western Front by Peter Barton 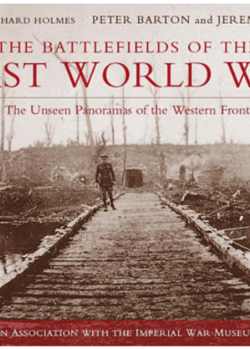 Having collaborated with two other authors (Doyle and Vanderwalle) in the preparation of the splendid 2004 volume Beneath Flanders Fields, Peter Barton has now produced a unique solo effort.

Textually, photographically - in its mapping and quality of production - the book is of huge significance and fascination. A tour de force.

From the IWM collection, Barton's pioneering effort reproduces 200 rare contemporary composite panoramic photographs of the Western Front from the Belgian coast to the Somme. Although the prints are mainly British, also included are some important German efforts showing the British front lines. But the book's strength is the range of views from the full length of 'our' front line, many offering vistas of up to 160 degrees. Their detail is both impressive and moving.

As the rate of destruction grows, bodies - from raids and assaults - litter no man's land; churches, villages and woodland tumble under the growing weight of shellfire; wire grows in depth, impenetrability and terror. Peter Barton offers fine, clear, colour mapping of the front, which also locates the points from which the panoramas were taken, frequently at huge risk to the RE photographers.

The incisive supporting text gives a valuable history of military photography and objectives behind panoramic prints before analysing sections of the front in depth, providing a clear outline of their development and history from 1914 - 1918. The book also abounds in apposite supporting photographs, and contemporary diary entries, most previously unseen by this reviewer. 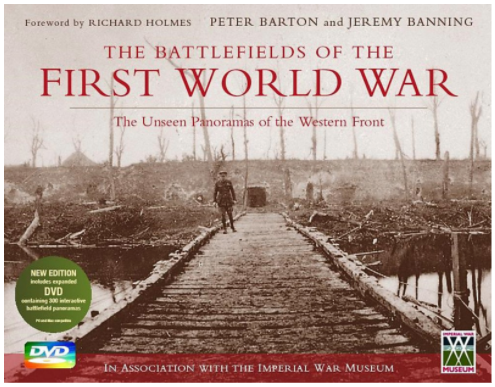 It provides a genuine library of additional panoramic prints of the Western Front in two CD-ROMS carefully mounted in protective jackets inside the rear cover worthy of a separate review in themselves. Clear and simple to use, each can be scanned from left to right, manipulated up and down, and zoomed in and out to review in general or detail. They are genuine, valuable and flexible tools.

In Stand To! No.74 I nominated Beneath Flanders Fields as my 2004 Great War book. Peter Barton's truly panoramic new offering unreservedly receives the nomination for 2005. Criticisms? None of significance, other than the photographic reduction imposed by the objective of reproducing panoramas (frequently many feet long) on a 12"-wide double page. Hence the CD ROMS which offer huge 'browsability'.

I have no doubts. The majority of recent hardbacks about the Great War - often sparsely illustrated - now touch the £20-25 mark (and a home ticket to a 90- minute Chelsea big push a wincing £45.00!). So, £50.00 for a book which offers such immediate delight, and the promise of value as a permanent work of reference, seems not simply reasonable but genuine value for money.

After all, it is Christmas list time - treat yourself to this invaluable book.

[This review first appeared in Stand To! No.75  January 2006. The archive of Stand To! issues 1 to the present day (over 113 editions) is available for Members to browse and download].