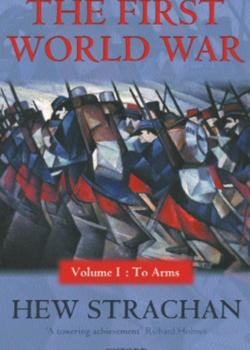 Faced with outstanding reviews of Hew Stachan's book in the Economist, the Daily Telegraph, The Spectator - and by our own President in the Sunday Telegraph - it behoves any lesser reviewer to be cautious when expressing an opinion on this massive new work. But, in reality, the challenge is not that taxing, since The First World War, Volume l, is incontestably the most important addition to the published work on the war for many years.

Although originally commissioned to replace C. R. M Crutwell's one volume A History o f the Great War (published by OUP in 1934), Hew Strachan's complete manuscript will fill three on completion. Volume I, To Arms, comprises a massive 1139 pages of text, supported by a 50- page bibliography and - that increasingly rare thing, an effective index. The second volume, No Quarter, will cover 1915 and 1916, the third, Fall Out, the last two years of the war.

The apparent adoption of a chronological approach is merely the logical skeleton to which Strachan attaches the muscles and sinews of a huge body of Great War history, biography and account of battle. His exercise is to treat with, and expand upon those key elements whose relevance or chronology fall outside the linear approach within the volume in which their overall relevance is most apposite or illustrative. Thus, whilst the first volume covers the origins of the Great War and the Western and Eastern Fronts in 1914, his review of naval warfare in the North Sea spans 1914 and 15. Actions in the Pacific are portrayed until 1917. Similarly, the neglected War in Africa - from Togoland in 1914 to East Africa in 1918 - is treated within a 100- page self-contained analysis in Volume I.

The overarching complexities and war-long importance of Turkey's entry into the war, Germany's global strategy and the means by which the war was financed and industry mobilised are also considered at length in separate sections within the first volume. I suspect that only the most serious of WFA members would claim more than a general knowledge of the ants' nest which comprised Balkans' politics in 1914, or of the international treaties, relationships and jealousies and the developments in armaments, tactics and colonial policy which triggered war. All are here.

Few are expert on the logistical problems, strategies and political tensions which dictated the extensive war of manoeuvre which spanned the Eastern Front in 1914 or the vital complexities of porterage and sickness in Africa which confined and shaped campaigns. Based on the first volume, Hew Strachan's trilogy must be considered a Great War master-class, a towering achievement, combining command and control of sources - political, military and sociological - with scholarly analysis and a skilful and unpretentiously crafted text. Nuggets of fascinating information gild the copy adding to colour the general and underline Hew Strachan's grasp of the particulars. Thus vast swathes of the Great War's 'givens' are rendered-down by detailed evaluation and interpretation of the most recent international events.

Clearly on completion the three volumes will present a genuine world history of a world war - the sum of all the relevant political events and military actions - regardless of nationally accepted propaganda. The body of writing on the Great War is now so massive that it is impossible - and illogical - to cite any book as 'the standard work of reference'. If it were not so, this would be the work. Both Liddell-Hart and Crutwell will remain important elements of any Great War library. Nevertheless, The First World War could - and perhaps should - encourage many but the most hard-core of bibliophiles to sweep other general histories of the conflict and the period from their shelves.

In his review Correlli Barnet warns: 'The general reader should therefore be warned that To Arms will prove dauntingly hard going'. But WFA members are hardly general readers, and should enjoy this essential reference work with vigour and relish. Criticisms? One or two. It is a bulky volume (and damned uncomfortable to read in bed). 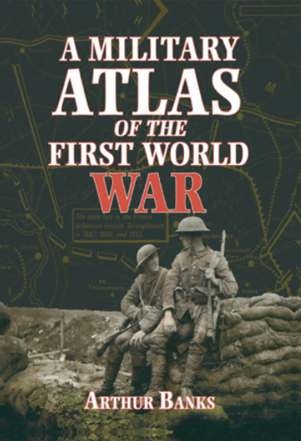 Whilst, arguably, adequate, the maps mostly present the general geography, and individual battles are not mapped, making Banks Military Atlas o f the First World War a valuable companion volume. As perhaps befits such an academic volume it lacks any photographs - except one, on the dust jacket, where a serious Hew Strachan faces the reader with confidence. So he should, his confidence is well earned and justly deserved.

Prof. Sir Hew Strachan is a Patron of The Western Front Association.

[This review first appeared in the journal of The Western Front Association Stand To! No. 63 January  2002. Members receive the magazine three times a year and have access to the online archive of over 100 editions. Members also receive our in-house magazine Bulletin three times a year.]