The Heroic Johnsman: The story of Jack Harrison VC 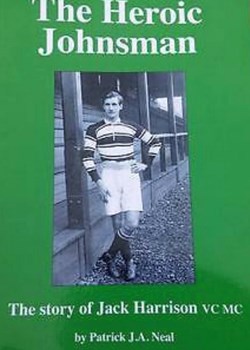 By Patrick H A Neal

Enthusiasms are an itch that demand scratching. In Patrick J A Neal’s case the itch triggered a three year long search to detail the sporting career of a footballer, cricketer, swimmer, and professional rugby player, who earned both VC and MC with 11th battalion, East Yorkshire Regiment.

Like all who earned the bronze cross, the bare bones of Jack Harrison’s sporting career, the actions in which he gained his awards, are readily available. In writing The Heroic Johnsman: The story of Jack Harrison VC. MC, author’s objective has been to highlight the length, breadth and quality of his subject as a sportsman of quality and the part he played in the games. He also evaluates Harrison’s military career and death on May 3 May 1917 near Oppy, Pas de Calais, when his platoon was pinned down by a machine gun position.

Privately published - available on EBay at £9.99 - Patrick Harrison’s research underlines Harrison’s drive, his own enthusiasm for his subject and the rich value of local newspaper research and the insights it offers the dedicated researcher/author