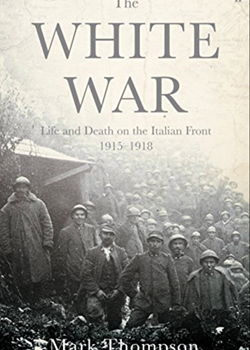 This is a well crafted and thoroughly researched overview of Italian participation in The Great War.

It details military events on the Italian Front from the opening of the war in May 1915 until the armistice and the main outlines of Italian politics, including character sketches of the principal military and civilian actors and the often ham-handed Italian diplomacy of the war.

While the Italian public was overwhelmingly anti-Austrian in the lead up to hostilities, there was no popular groundswell of popular opinion for war. Italy had been a member of a Triple Alliance with Germany and Austria-Hungry since the 1880s. Seeking to increase its territory, the Salandro government refused to go to war in August 1914.

Instead, it opened negotiations with Vienna, Great Britain and France to expand Italia Irredenta; reclaiming allegedly Italian territories in the Tyrol, Trieste, Gorizia, Istria and Dalmatia.

While Vienna baulked at handing over territory, France and Britain promised all that the Italian irredentists desired, including land in Turkish Anatolia.

Military, politically and economically unprepared for war, the Italian Army was ill-trained, ill-equipped (particularly in artillery) and badly led. As a largely agrarian nation, it lacked heavy industry.

Nonetheless, in May 1915, Italian forces cautiously advanced across the Austrian frontier in the Tyrol and on the Carso Plateau northwest of Trieste. There the front became solid for some twenty-nine months as Italian casualties mounted during twelve major battles along the Isonzo River.

The stalemate was not broken until October 1917 when combined Austrian and German forces pushed the Italians back 150 kilometres in the Battle of Caporetto. This defeat provided a catalyst which sparked the reorganisation of the Italian war effort. The high command was purged, treatment of soldiers vastly improved and extra financing expanded domestic munitions production.

A year later, with help from England, France and America, Italy had defeated her Habsburg enemy.

[This book review first appeared in Stand To! the journal of The Western Front Association, No.85 April/May 2009. Members receive the magazine three times a year and have access to the archive of all 113+ issues, bar those published within the last year which are available to Digital Members].