Victory at Gallipoli: The German–Ottoman Alliance in the First World War by Klaus Wolf 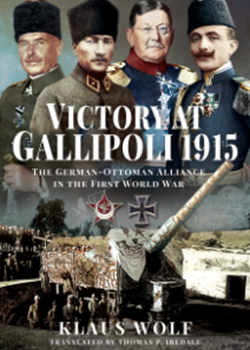 Translation from the German by Tim Iredal

There has been much excitement amongst the linguistically challenged Gallipoli historian community at the release of Victory at Gallipoli. Originally published in Germany in 2008, the book’s revision and translation exponentially increases our knowledge of the German role at Gallipoli. Until recently our perspective was often limited to translations of books by General Liman von Sanders and Colonel Hans Kannengiesser. Klaus Wolf has delved deeply into the archives to reveal far more of the story.

The book begins with a quick glance at the history of German military cooperation with the Turks. Both sides had hidden agendas: the Ottomans knew they needed help to raise their lamentable military standards; the Germans sought to gain influence for geopolitical and economic advantage across the Ottoman Empire. However, problems were soon apparent. Individual Turks were often uncooperative while the Germans were frequently tactless, sometimes badly behaved, and often unable to make any real impact.

Things gained pace in the last year of peace, although the appointment of von Sanders to the German Military Mission provoked a serious international controversy. Then, accumulated Allied blunders allowed Admiral Souchon to bring the Goeben and Breslau into the Dardanelles, starting the slide into war.

As Fifth Army commander, von Sanders, revamped his forces, moving troops back from the coast and looked to counter–attack landing forces once it was apparent what was happening. Wolf acknowledges the sharp reaction from several Turkish commanders who believed this policy was overdone, and that von Sanders’ further fixation on a possible landing at Bulair allowed the Allies to get ashore and ultimately increased the casualties suffered. Yet, in the end, von Sanders emerges with credit from the campaign as he seems to have been a fairly safe pair of hands.

Overall, the senior attached military and naval German officers were hampered by their inability to work in harmony, and their unconcealed jealousies and power struggles reduced their effectiveness and undermined their authority with the Turks. However, much excellent work was still carried out – all charted by Wolf.

The improvements to the Dardanelles defences supervised by Admiral Usedom were crucial, while the German personnel aboard the Nusret laying the key minefield helped decide the failure of the Allied fleet on 18 March. The contributions of the naval machine gun detachments, a whole fascinating chapter on the role of German airmen and the work performed by German officers in facilitating the production and movement of munitions is not forgotten.

However, while there were exceptions, the attude of German officers to the Turks could be arrogant. Thus, Colonel Wehrle said of the Turkish personnel in 8th Heavy Field Artillery, ‘From the simple gunner up to the battalion commander there was no duty which did not have to be demonstrated or done by oneself’. These are sentiments that my managers at the Imperial War Museum would have endorsed – especially as he goes on to comment on the ‘Unpunctuality, sluggishness, deceit and abuse of official power’ of the hapless Turks. But such attitudes made the German officers unpopular.

As with all translations not blessed with a dedicated team of sub–editors, there are the occasional clunky passages, but they do not affect one’s enjoyment. The worst thing about the book is the element of history from the British perspective – the origins of which are revealed by a footnote which shows his source to have been the somewhat outdated Gallipoli by Robert Rhodes James. But that is a minor grizzle.

The book allows us flashes of insight into the view from the ‘other side’ of well–known incidents. Thus, Mühlmann’s quote after shells from the Agamemnon and other ships forced the Turks to retire from their gains during the night attack of 1 May, ‘The flanking fire of the Agamemnon, which is now my sworn enemy and I wish it is speedily sunk by a German U– Boat’. Quite!

Well annotated, the book has excellent illustrations and a list of all German officers serving, followed by an all–ranks list of those who died. It finishes with a dignified apology – as a German author – to the Turks dragged into a war that caused them great suffering. All in all, a great addition to any Gallipoli library.

This review first appeared in the January 2021 edition (no.121) of the journal of The Western Front Association Stand To! Members receive each of our journal Stand To! and member magazine Bulletin three times a year. Digital Members receive this electronically. All issues are available to members via their digital login.