Why 1914? The causes of the Great War. A narrative history. 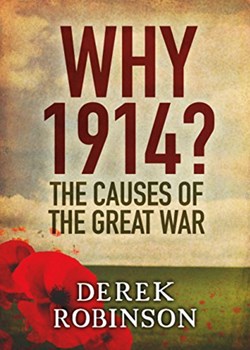 I am surprised that there is no ISBN number in the book. Mr Robinson is a graduate of Cambridge University and I had imagined he had taught history, although his career was spent mostly in journalism and authorship. He did National Service with the RAF and has written successful novels about the RAF; being nominated for the Booker Prize in 1971, with his first, Goshawk Squadron.

The causes of the Great War are to complex subject for a small book. The author offers no notes or bibliography and, having read his introduction, I fear much reliance on AJP Taylor and Basil Liddell Hart. Not unreasonably, he starts with the assassination of Archduke Franz-Ferdinand and then works backwards. He properly describes the nature of the three autocratic monarchies central to the war and its causes, examining the personalities of the three men who ruled these empires. The author also goes into some detail about the circumstances (Mayerling) that made Franz-Ferdinand heir to the Austro-Hungarian throne and why his marriage for love was considered unsuitable for the heir to such a large empire. (Which he manages to make Archduke Rudolf sound romantic; in spite of drugs, drink and womanising).

I disagree though, with Mr Robinson’s interpretation of Franz-Ferdinand’s plans for reforming the empire when he came to the throne. He describes this as a ‘what if?’ of history, imagining if it had been Ferdinand who died. Maybe he should have looked at the ‘what if?’ of Rasputin dying instead when he was stabbed a few days before. I think the war would still have happened, but not then. The author examines the British situation alongside a mainland Europe seething with the suppressed unrest of populations, given a voice by urban employment brought about by the industrial revolution. He discusses British military reforms, the naval rivalry and the Irish situation.

Also examining Bismarck’s unification of Germany, the Schlieffen Plan, the Russo-Japanese war, the two Balkan wars etc. Although all the major ingredients of a recipe for war are covered, the author fails to make much of the changes that the industrial revolution and mass production had brought about in the transformation of weaponry.

Foolish errors are also present: Big Berthas did not shell Paris in 1918; Jules is not one of Raymond Poincaré’s Christian names; Franz-Ferdinand did not die immediately. Equally the author is prone to too many sweeping generalisations, such as ‘many on every side wanted war’, ‘everybody thought it would be over quickly’. Certainly Kitchener, Churchill and Henry Wilson did not think so. Why else did Wilson spend his summers cycling up and down the roads in Belgium and Northern France?

The author also strays into the battles up to the end of 1914. Although patently these are not causes of the war they do reveal why the war descended into trench warfare and lasted so long: the main combatants were ‘peer enemies’ armed with similar, sophisticated weaponry.