'The Cheerful Sacrifice' with Jon Nicholls 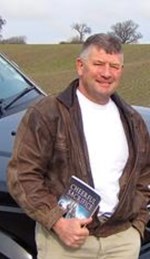 Jonathan Nicholls is an independent guide to the battlefields of the Western Front 1914-18, with over 40 years experience. He specialises in taking small groups of 1-10 persons from the UK, on private and personal, ‘bespoke’ tours to the Battlefields of the Great War.

His first book, Cheerful Sacrifice, tells the story of the spring offensive of April - May 1917, otherwise known as the Battle of Arras. Probably because the noise had hardly died down before it started up again with the explosions at Messines, shortly to be followed by the even more horrible Third Ypres - remembered as Passchendaele - the Battle of Arras has not received the attention it deserves. Yet, as the author points out, on the basis of the daily casualty rate it was the most lethal and costly British offensive battle of the First World War.

Image: This is photograph Q6418 from the collections of the Imperial War Museum. Q6418 IWM