The latest issue of the journal of The Western Front Association is out today. There are ten carefully researched and richly illustrated articles and eight extended book reviews which follow a new format to reviews, including content from one of the authors. 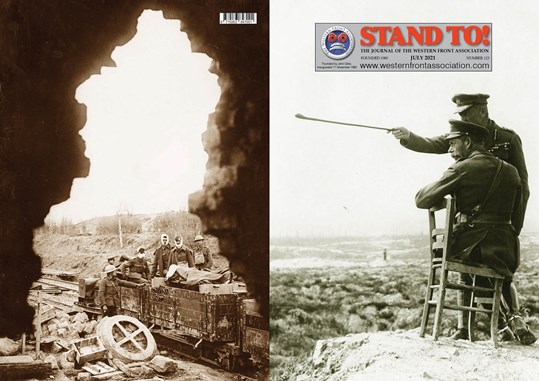 The Myths of Langemarck by Jack Sheldon 10-13

Where are the Missing Soldiers of the 45th Battalion at Messines Ridge? by Lachlan Newham 14–17

An Iron Imperative: How the Battle of Cambrai speaks to the present day by Alexander Turner 18–23

Stabbed in the Back: The German General Staff and the consequences of economic mismanagement by Dr Pete Edwards 24–28

The Death Penalty: To coerce or encourage? by Lester Lewis 34–37

Walking Verdun : A Guide to the Battlefield by Christina Holstein (introduced by the author).

The Gallipoli Evacuation by Peter Hart (reviewed by Jim Grundy).

In Which They Served by Richard Cullen (reviewed by Barbara Taylor).

Communities of Resistance: Conscience and Dissent in Britain during the First World War by Cyril Pearce (reviewed by Elizabeth Balmer)

Comrades in Conscience: The Story of an English Community's Opposition to the Great War by Cyril Pearce (reviewed by Elizabeth Balmer)