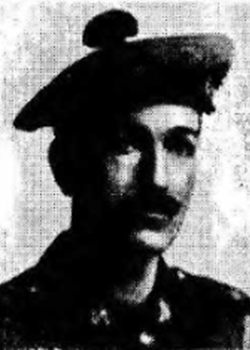 He served in German South West Africa as Sergeant after the outbreak of war.

He transferred to the 9th South African Infantry and was sent to East Africa and was appointed Instructor in charge of the depot at Potchefstroom.

He returned home to England and joined the South African Scottish Regiment at Bordon Camp in October 1916 and died at the Battle of Arras. He was 32.