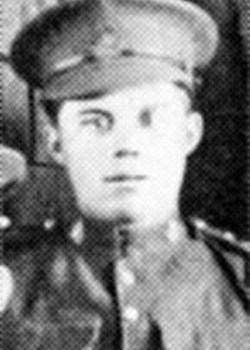 Killed in action during a relief of the frontline near Lens

Born at Neepawa, Manitoba, Canada on 28 March 1895, John was employed as a farmer prior to his enlistment into the CEF at Winnipeg on 10 January 1916.

After arrival in France – via the UK – later in the year, John took part in the latter stages of the Battle of the Somme and the Battle of the Ancre but was killed in action during a relief of the frontline near Lens on 26 January 1917.

He is buried in Bully-Grenay Communal Cemetery British Extension, Pas-de-Calais.